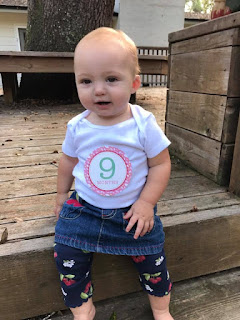 Lily posted this picture of Maggie on Facebook today because that little girl is NINE MONTHS OLD! Can you believe that? And look at her- she's becoming a little girl. Still plenty baby but not nearly as much of a baby as she was just a month or so ago. And of course, the tres chic denim miniskirt with leggings does add a great deal of maturity.
Oh god. My babies. My babies, my babies.

Here's another picture Lily posted the other day: 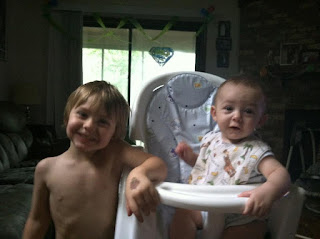 Do you remember those days? Four years ago when Owen was my tiny rockstar prince and Gibson was a baby. I looked at that picture and I cried. Of course I love seeing these children grow up. What kind of a monster would I be if I didn't? And yet...
It's like I always said about my own children- it's as if someone came and stole my babies and replaced them with these people. No one could love their people more than I do but god, I do love babies. The weight of them. The squish of them. The delicious nuzzley necks on them. The open-to-the-universe heart and eyes of them. Their delight in the simplest things. Their need for being held and cuddled.
The other day I said to Owen, "Come here and let me hold you and pretend you're still my baby."
"Utn-huh," he said. "We're not doing that."
Lord, Lord, Lord. I have become a stereotypical grandmother and there's no way around it.
"Well, let me kiss you on your head then," I said. And he let me do that. He's tolerant of his old Mer. Up to a point.

So we went to a different restaurant today and it was good. A sort of Asian fusion buffet and they had what Gibson wanted which was shrimp and noodles and they had Mongolian beef, tofu AND eggplant as well as absolutely delicious egg rolls and soups and other very tasty dishes not to mention an entire little refrigerator/cooler with all sorts of incredible desserts including jello puddings, nutty-buddy ice cream cones, flan,  AND home made cheese cake.
Well. Only in America, y'all.
Make America great again? I don't think so. We ARE great. 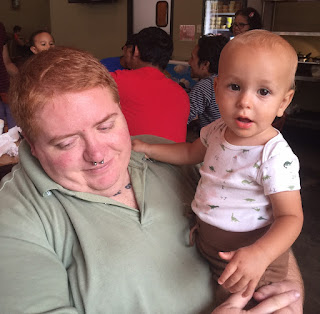 I love that little hand on Uncle Hank's shoulder. 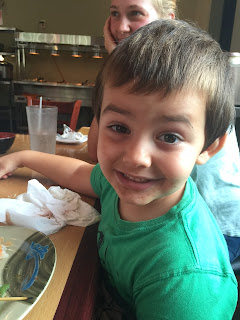 Gibson posing after I told him that all the food on his face made him look like he had a beard, which I thought was quite attractive. 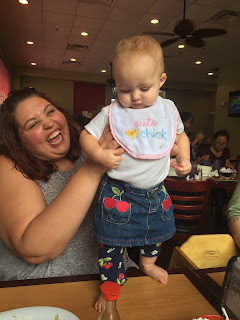 Maggie and her beautiful mother.

I came home to find red feathers and one cardinal head on the back porch.
Really, Maurice?
Then I went to do a load of clothes and now it would appear that my washing machine is broken and it's broken in locked position so I can't even get those clothes out of it.

Ah well.
All of the chickens are fine and put to roost and I've heard from my husband and all is well with him. There is so much going on in my state, my country, my planet, which is horrifying and scary but right now I'm just holding on to this which is good right here.

There is a thin line between being selfish and being unattached in the Zen sort of way. I tend to believe that I am more selfish than Zen but at least I know there's a difference.

We are finally getting some gusts of wind. I wouldn't mind some rain.