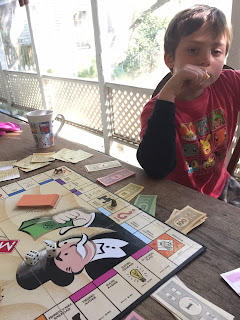 It was such a different dynamic having just Owen and Magnolia here today. Of course. We had a lot of fun and it was so wonderful getting to spend some one-on-one time with my boy Owen. I mean, Maggie was here of course but she's not very demanding when it comes to our conversations and activities. She's the sweetest little monkey and being able to watch Owen with her made my heart so happy. I remember before she was born and right after and how absolutely blissed out he was, first by the idea of having a baby sister and then, with the reality of her and I wondered if he'd tire of being a big brother. If the novelty would wear off.
But no. Not at all. As we were playing with her today, patty-cake and eensy-weensy-spider and this-little-piggy and making her laugh, I said, "Isn't this a wonderful age for a baby?"
And he said, "Yes! It is! But when she's one, it's going to be even better!"

And oh, how she loves him. 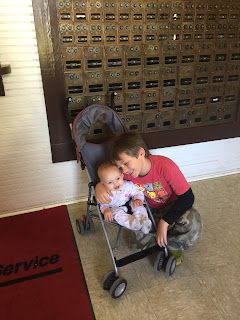 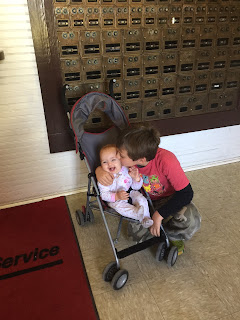 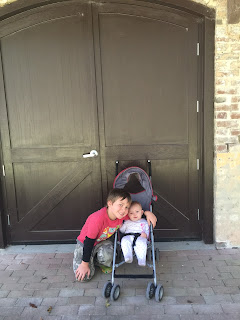 We walked up to the post office and down a shady road and whenever Maggie would fuss, Owen would simply walk in front of the stroller and talk to her and she'd settle and then laugh.

It's not like anything I've ever seen- this love between them- and Gibson is the same way with her. When I was a child, I was the oldest of four kids and the only girl and I can remember so clearly wishing I had a big brother.
And seeing this little girl with her big brothers, knowing that they will be watching out for her, loving her, her entire life, just gives me a feeling of great peace in my soul.

There were snacks and the walk and feeding the goats and chickens and Owen wanted to play Monopoly which we've always played simply with a dice and our little train or shoe, going around the board, but today I told him we'd play the real game. I counted out the money and put the cards on the board and tried, as simply as possible, to introduce the idea of buying property and collecting rent. He got it pretty quickly and before I knew it, this child who has no idea how to count money owned three railroads and both utilities as well as other properties and was beating the living crap out of his grandmother.
Sigh.

So it was a very good day and I not only appreciated the time with Owen but also, the time with my granddaughter who is just so happy and so fine. Sometimes she smiles so big that her eyes squeeze shut and she claps her little hands and chatters away in Maggie-Tongue and she fell asleep in my arms this afternoon while I rocked her and sang to her.

I took them home when Jason got off work and while we were in the car, Owen started writing a book on Post-It notes. The first chapter was this: "It was a dark and stormy night."
I am not kidding you.
The second chapter was, "Someone was there."
The third chapter was, "It was Snoopy."
He told me that he plans to write ten chapters.

Lily is very sick. And miserable. Her throat is so swollen that they gave her a steroid shot before they let her leave the clinic. Strep is the suckiest of sucks and I feel so sorry for her. I remember once when I was married to my first husband and we both got strep at the same time. Hank and May were still littles and we could barely pull ourselves out of bed to change a diaper or make a peanut butter sandwich. I mean- it was fucking traumatic and I'm just glad we all survived.

But. We did. And so will Lily and who knows who'll get it next? Not only is strep the buggeriest bacteria but it may be the most contagious.

My man is home and he's tired too. He brought me a beautiful turtle shell from the woods, bleached by time and rain to white sculpture. He knows me so well. 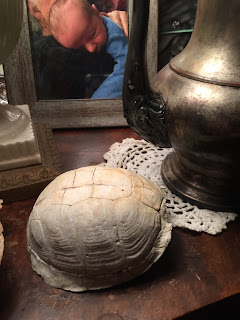 We'll be watching the debate because how can you not? It's a nasty train wreck about to happen and my fondest hope is that Trump completely loses his shit and walks off the stage, out of the race, out of the running, and out of our lives. Not that Pence is one damn bit better.

Let's check in tomorrow, shall we?