So I was getting ready to go over to the coast this morning when I got a call from Lily. Owen had cut his hand on some broken glass he'd found outside and she thought he might need stitches. He was screaming in the background as only a child whose blood is leaking from his own personal body can scream.
Ooh boy. Really? ANOTHER trip to the doctor?
I'm not a person who rushes to get stitches every time someone gets cut. I mean, I'll do just about anything to avoid the situation myself (that super glue they call Liquid Bandage is pretty awesome stuff) but when Lily sent me a picture of the cut I said, "I'll come stay with Maggie and Gibson and you can take him in."
I got to the house and Owen had calmed down some. He was able to show me the cut and sure enough, I thought he should go get it all sewed up.
So I played with Maggie and Gibson while his mama took him to the Urgent Care where a very nice doctor did a beautiful job in my opinion and said that if it had gone any deeper, they would have had to do surgery on the tendon. 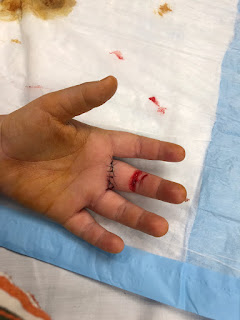 Lily reported that when they gave him the numbing shot, everyone in the building heard Owen's reaction. I felt so bad for him. He's gone through so much in his short life when it comes to things like this.

Maggie and Gibson were good and I have to admit I let Gibson watch way too much Sponge Bob but whatever. We did go outside a little bit. It was such a beautiful day. 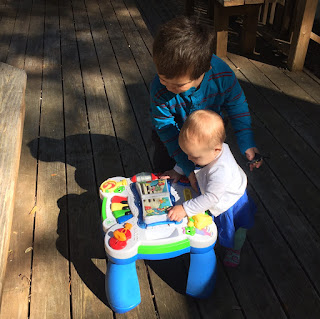 So. That's what happened on this particular Sunday. Among other things.

May and Michael stopped by the Urgent Care while Lily and Owen were waiting, to give a little moral support to the boy and May gave Lily something she bought for me at Goodwill last week. She'd texted me and told me that she'd scored THE VERY BEST THING FOR ME EVER but she wasn't going to tell me what it was. So when Lily and Owen got back to the house, Owen's hand all neatly bandaged, he handed over a pretty blue bag and I reached in to find this dress. 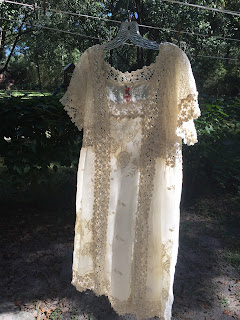 An absolutely beautiful and flawless Johnny Was dress that if I'd seen it in a real store, I would have cursed Johnny Was himself for making such beautiful shit that I can't afford but it's MINE! I believe I will wear it every night when we are in Mexico. I mean, EVERY NIGHT!
Can't you just see me on the back of a moped wearing that piece of confection? Oh yeah.
Best Goodwill find ever. It was on the "boutique" rack but it was still less than twenty bucks and I feel as if fortune has fallen upon me and I am so grateful to my daughter for finding it and buying it for her old mother who never feels beautiful but might just feel a little beautiful, wearing that.

So I came on home and cleaned out the hen house and watered the porch plants.
Here's a picture of one of the confederate rose blooms. I post at least one every year but have not gotten a good one this year. 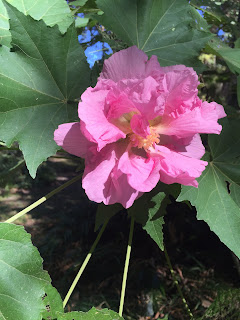 Still not a great shot but they're so fine and fancy. Speaking of confection.

I got out in the garden and got enough thinnings of my little baby seedlings to be part of our salad tonight and I did a little weeding and Maurice came out to help me. 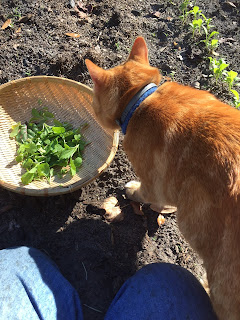 I was so pleased for her company until the bitch attacked my hand. Twice. Why, Maurice? Why? She gave me two good puncture wounds and I let her know that I was not happy with her. Not at all. And I'd just given her some tuna juice not an hour before! Dang that cat. Why do I even put up with her, much less love her?
No idea. She's just crazy.
I guess maybe I can relate to that.

Mr. Moon is home again and did not shoot a deer but had a good time in the woods and hanging out with the dude friends. I am so very, very glad to have him home and I think that he's always happy to get back to his wife and our animals and funky old house after a few days away although I have to say that he certainly isn't unhappy when it's time to leave again.
Sigh.
Well, on Tuesday we will have been married for 32 years so I guess it works for us, whatever it is.

I won't be doing a morning post tomorrow as I am going to be at the hospital with my friend who is having surgery. I am hoping so hard that all goes well. But I'll probably report in tomorrow night.

Life just keeps throwing us curve balls, doesn't it? I remember when Hank was just a very little guy and he said to me, "I don't know why people even make plans, Mama. They never seem to work out."

Of course, he is now one of the biggest planners I know but he had a point.

Let's all stay well for awhile, okay? No more diseases or viruses or cuts or broken bones. Or any other damn thing that I don't even want to possibly invoke by saying the names out loud.
Come on, people. We can do this.