We Do Reap What We Sow 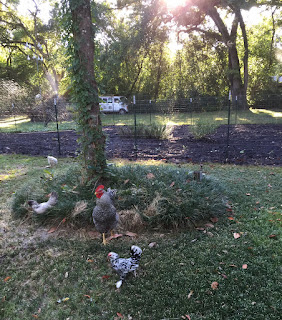 Don't I live in a pretty place and don't I have pretty chickens?
Yes. Yes I do.
I got that garden planted today. I planted collards, mustards, arugula (including a variety called "wasabi"and isn't that going to be delicious?), rainbow chard, winter kale, beets, carrots, Romaine, and a row of Mesclun.
It took me all afternoon due to the fact that it was 90-something degrees out there but I got it done and now the sprinklers are on it and I sure do hope it all comes up because damn! That was a lot of work.
Mr. Moon is going to laugh at the crookedness of my rows but I do not care. They are nicely spaced with enough room to walk between them and I'm as excited as an eight-year old to watch everything come up.
Well, you know, if it does.

I've spent some time today watching as the Republican party falls apart. It is odd that after everything Trump has said that it took the words "grab them by the pussy" to really create the horror and disgust necessary to cause the rats to flee the sinking ship. But I get it. There's just something so inredibly violent and wrong about the image those words describe.
Ugh. Not to mention that any woman who has ever been kissed or touched in places or ways that have made her feel demeaned or invaded or violated can't help but react in a visceral, immediate and passionately furious way. And I'd venture to say that a large majority of all women have been the victim of this sort of unwanted invasion in their lives at one point or another and most of us have shrugged a lot of these things off, thinking that surely we must have simply been in the wrong place at the wrong time wearing the wrong clothes and somehow signaling that we were asking for it because why else would a man do that to us? And it wasn't...rape? Right? And we took the anger and sense of shame and confusion we felt and stuffed them up inside ourselves silently and I think that many women probably never admitted to themselves until the moment that they heard those words on the video that what had happened to them had been a real and hideous violation of their bodies. By not just an asshole but a complete monster who never once had a thought about the heart and the soul of the woman he was touching and thus, for that moment, claiming rights over them that they had no right to.
And right there, on that tape, Trump revealed himself to be that monster. We all knew he was an ignorant asshole but he just kicked his ass up into the monster category and even his running mate realizes that.
It makes me laugh, all these Republican politicians calling for Trump to step down, to be replaced. It's too goddam late, motherfuckers! You created this situation and now you have to suffer the consequences. Or, as Bill Maher said, "Don't let Trump quit! You assholes voted for him, nominated him, handcuffed yourself to this dead hooker, now drag it to the finish line!"
Although I would not have used the word "hooker" in there. That's disrespectful to women, too, but I agree thoroughly with the gist of what he said.

So. That's been my day. Planting seeds and watching the seeds that the Republican party planted and nurtured so carefully for years come to fruition.

My seeds will feed me and my loved ones if I take care of them. The seeds that the Republican party planted have revealed themselves to be the horror that they are and they are finally realizing that it's too late to weed them out. The damage has been done.

Good luck with that, you hateful motherfuckers.