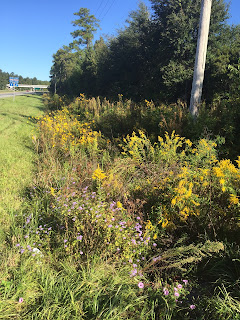 So I'm taking my walk this morning and it's a beautiful day and I get to the part of the road by the horse farm at the intersection of that road and the road that leads past Ms. Shelly's house and there's a big black SUV parked across the intersection. So, I approach with curiosity and a little caution, wondering if someone has passed out in the dang thing and if I'll be called upon to do something insane like try to revive someone and a guy steps out of the vehicle. He's wearing a black Kevlar (I guess) vest with guns and stuff in the pockets and he says, "We've got a man in the woods over there."
He then proceeds to describe the guy as if maybe I'd seen him and asks if I live up by the horse farm and I say, no, I live in Lloyd, pointing, probably in the wrong direction as I do because I have no sense of direction, and he says that well, I better go back the way I came. They have dogs on him. The guy in the woods, that is.
I do not hear any dogs but I take him at his word and that is somehow reassuring and I ask if he thinks it's safe to go back through the woods I just walked out of and he says, Yeah, he hasn't crossed the road. I ask what the guy did and he said that he stole a vehicle and they have warrants out for him.
So. With a small bit of trepidation I head back through the woods where I'd just come from and indeed, had stopped in the woods to pee as I also do, and just continued to listen to Meryl Streep reading Nora Ephron's Heartburn (which is truly one of the most delightful audio book experiences I've ever had) and sure enough, I made it back to the road and safety with no problem.

After over a dozen years of walking this same path I have never once had an experience like that and indeed, have only ever come across one guy walking the same path although now and then I used to see a couple of women on horseback from the farm.
So that was a bit weird.

Steve Reed just wrote a post about waking up at 5:30 in the morning to realize that a helicopter was circling his London neighborhood with flashing lights which was also weird and it's double weird that we both had distant brushes with possible escaped felons or whatever.

Well, I guess I'll go hang the sheets on the line.