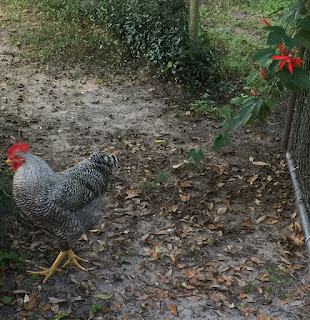 Not a great shot by any means but I love how the red of Otis' comb and wattle is the same shade as the red of the passion flower blooming on the fence.

I've had the most laid-back day due to the fact that a guy was supposed to come inspect for wood-destroying organisms at three never has shown up or called and so I spent the entire late afternoon being lazy, reading, mostly. I texted Lily and Jessie that the most frustrating thing about it was that I wanted to take a nap but was afraid to fall asleep lest he show up and I didn't hear him and then I texted that that had to be the wussiest thing I've ever said in my life.
But I do wish I could have taken a nap. To be honest.

Last night Maurice slept with me again and this morning she was adamant that I get up when she thought it was time and after kissing me on the lips (yes, she does this) and gently nipping at my hands, she then jumped onto the bedside table and knocked off the lamp, which did not break, and my plugged-in phone, which did not break, but the charger it was plugged into did in fact break, the little part that sticks into the phone coming completely cracked off the base of the charger. I had to pull that little part out and the phone seems to be working fine but dammit, Maurice! you owe me for a charger! And it wasn't an off-market charger either It was an official Apple charger!

And I was just bragging on her last night because she hasn't drawn blood from me in over a week.

Why do we have pets? Why?

Anyway, the interview on Fresh Air with Bruce sort of restored my soul a little and I've felt more at peace today. If you can't get enough Bruce and didn't hear the interview, there's a link to it here.

And so it goes again. Another day. I've got chicken cooking with fresh pineapple and onions and cinnamon and I have jasmine brown rice simmering on a back burner, artichokes steaming on another. Mr. Moon will be leaving for Georgia tomorrow afternoon for more hunting activities and I'm hoping he gets the garden fence put back before he pulls out of Lloyd so I can plant my seeds and bedding plants. I will miss him and hope to have the garden all sown and lovely by the time he gets back. We are so late this year but it is what it is and maybe the mushroom compost will speed things along, or at least, support our efforts in positive ways.

Again, I have to say that I am as lucky as any woman on earth could possibly be, and luckier, by far, than most.