Now y'all know how, um, reclusive? I am. You know how I struggle with social interactions.
And yet today I let someone come to Lloyd and visit me (hell! I invited him!) and I knew it was going to be great and it was great and I just had the best day. 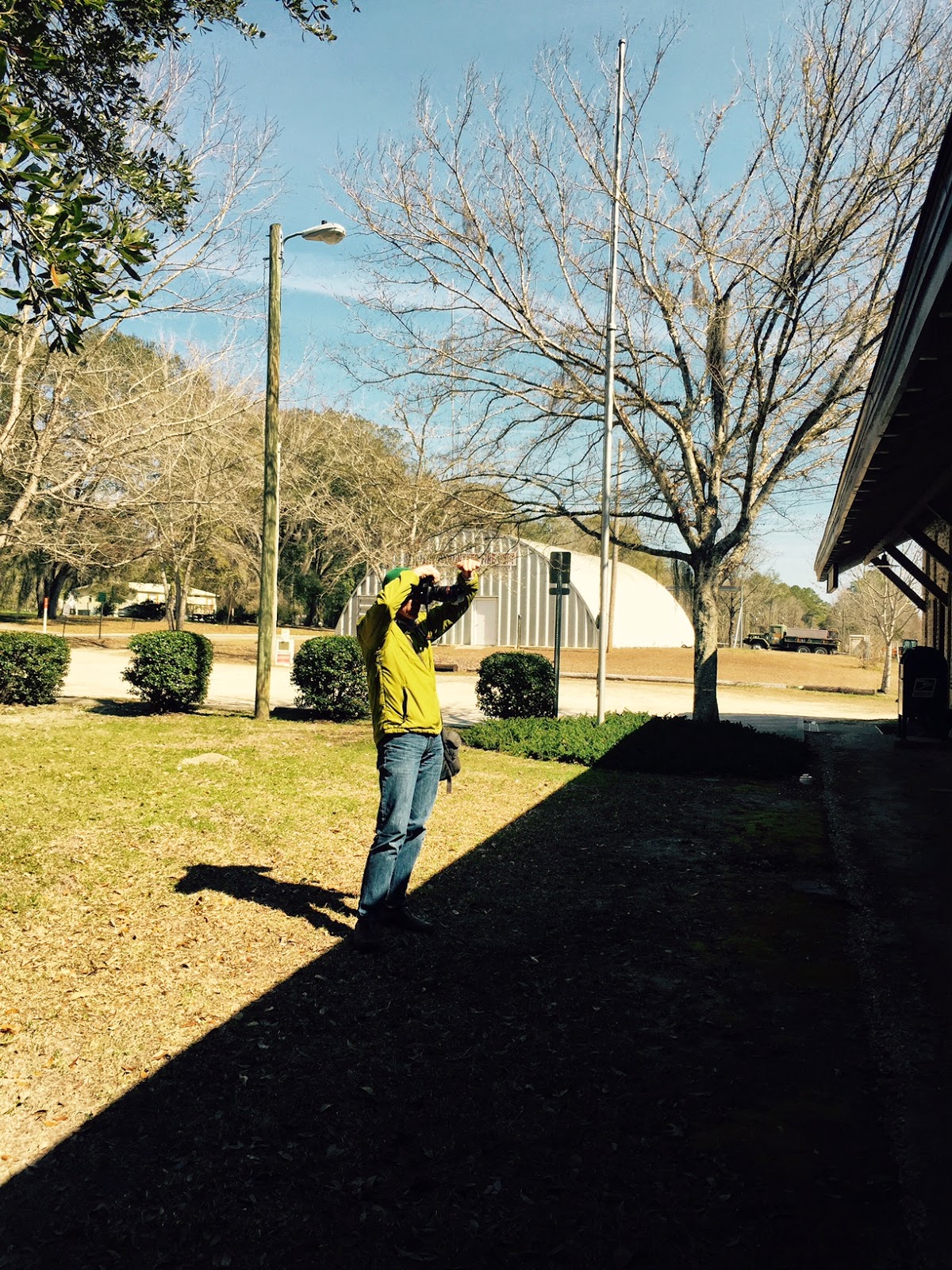 An absolutely atrocious picture I took of him but one which is a very fine example of shadows and light.
Yes! Steve Reed!
All the way from London! Well, via Tampa but still. He's been in Tampa helping his mama get ready to downsize from the family home and he took an entire day to drive up here to Lloyd and I'm so glad he did.
I've felt a kinship for Steve for some time now, knowing that he used to live in Winter Haven where I spent a good many of my formative years. A Florida boy, even if he does live across the ocean now. And, well, I don't know. I just didn't have one qualm about meeting him in real life. Sure. I was a tiny bit nervous because what if I was wrong? What if my intuition had lied to me?
Guess what- it did not.
He got out of the car, we hugged, and I felt like I'd just met my long-lost brother.
He immediately began taking pictures of Mick and the chickens and I showed him the yard and the house and then I heated us up some soup and bread and we ate in the kitchen where all the best stuff happens.
We talked like we'd always known each other, catching up the way you do. I knew the boys were coming so I took him down to the post office so he could take pictures which is where I took that photo of him. We came back to the house, the boys arrived and we decided to take a little jaunt down Main Street so that I could show him the fally-down house which I knew he would love with his photographer's eye.
The boys were a little shy at first but warmed up to him very quickly and when we walked past Papa Jay's Country Store Coming Soon, who was there outside but Papa Jay himself!
"When are you opening?" I asked.
"A month!" he said. "Would you like to come in and see what we've done?"
Well. Of course!
And oh, how nice it looks. Vienna sausages and many other canned goods lined up as pristine and clean as rows of jewels. The coolers are all ready for milk and bacon and eggs ("so you can cook breakfast for your children!" said Papa Jay) and hats hanging up from the beams and there will be subs and beer and there is even a good selection of over the counter medications including children's Tylenol and cold medicine so you don't have to drive all the way to town if your child gets sick in the middle of the night. There's penny candy and Tide and bleach and toilet paper, all of it arranged with mathematical precision on the shelves. Papa Jay is so proud and we also met either his son or his brother or his cousin, I am not sure which, who shook my hand and the mama, the MOTHER,  was sitting in a chair in the corner and she was so sweet.
This is going to be a very big thing for our little community and it was so cool that Steve could be there for that, as well as Owen and Gibson. I told the Jays that we would be customers and we sure as hell will be.
We walked on down to the the fally-down house, passing Ms. Liola's on the way where the Sheik was doing some yardwork. We stopped to chat with him a moment and when we walked on and I told Steve that that was the Sheik, he said, "I thought it might be!"

I can't wait to see the pictures that Steve took of the old house with the wallpaper in it. I took some of him. 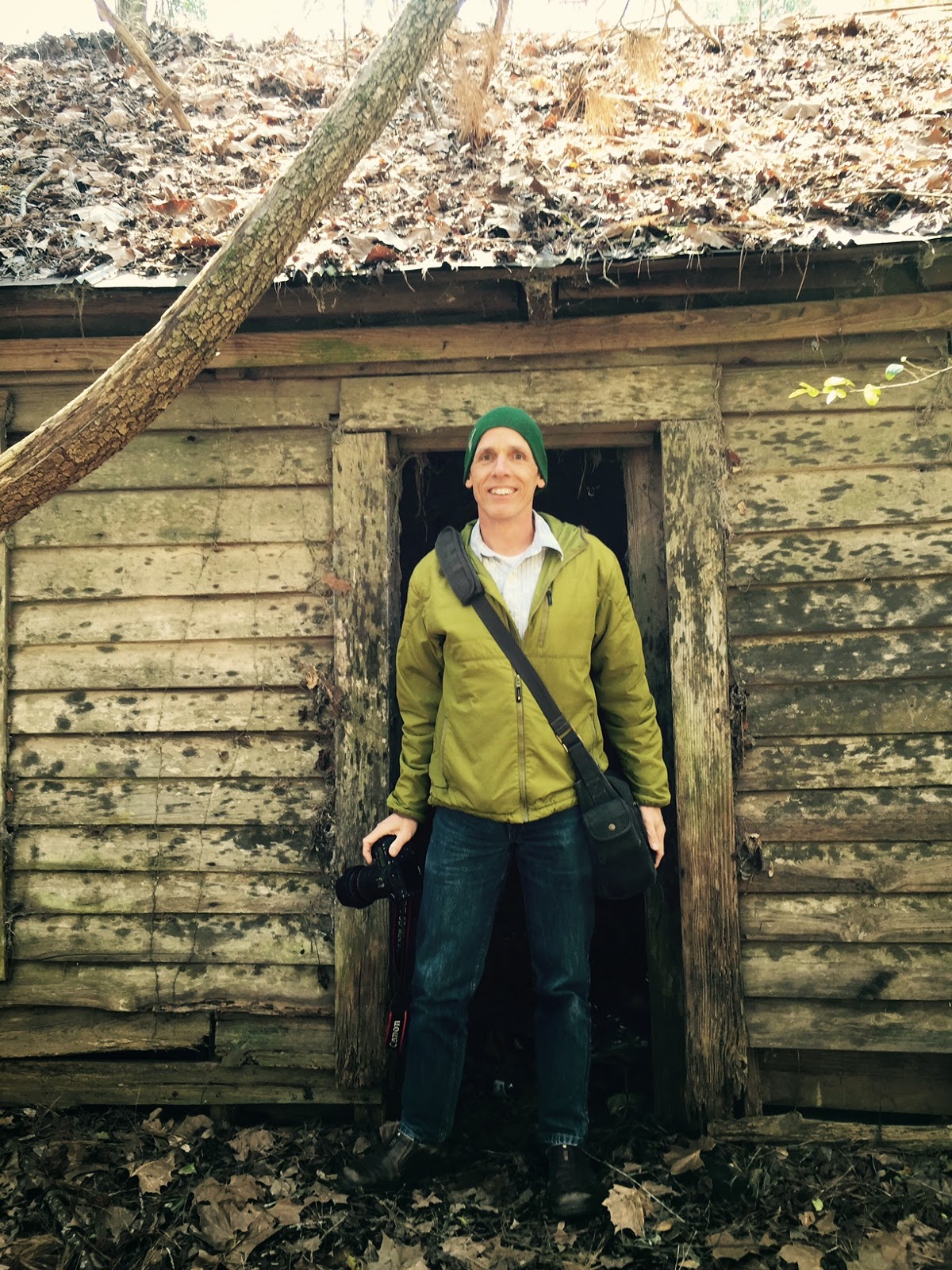 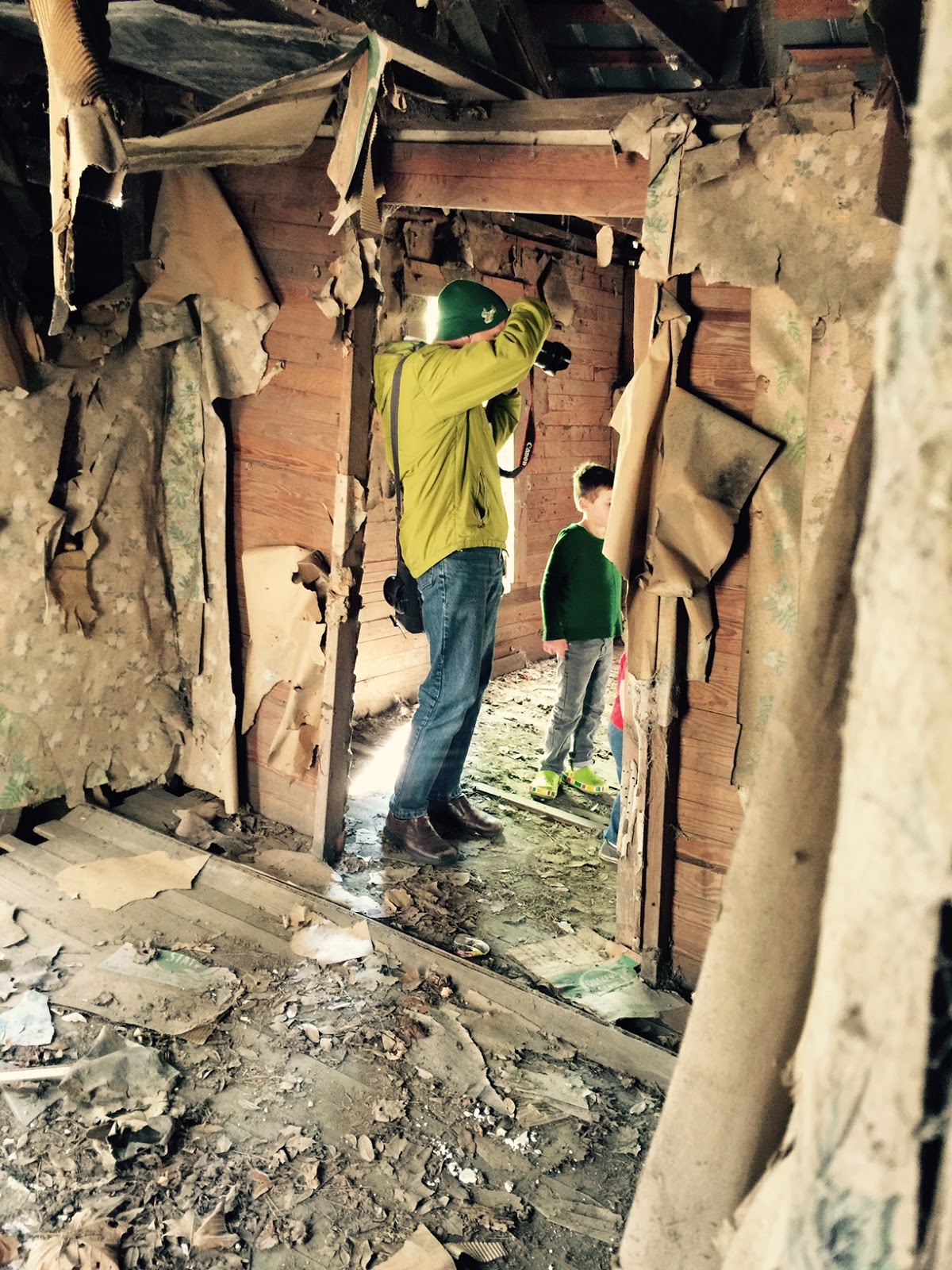 It was such an adventure and the boys had such a good time. Owen kept showing us how to run with power speed and told Steve to try it too. And he did. He was such a good sport.

And the thing is, I felt so completely comfortable with him. So comfortable that by the time we got back to the house I said, "Can you keep an eye on Gibson? I have to pee."

Before he left, Owen whispered to me.
"Tell SteveReed that I like him. And tell him to take some pictures of nature."
And so I did.

He is now and forever SteveReed, all one word.
And before he left, we took a selfie together. 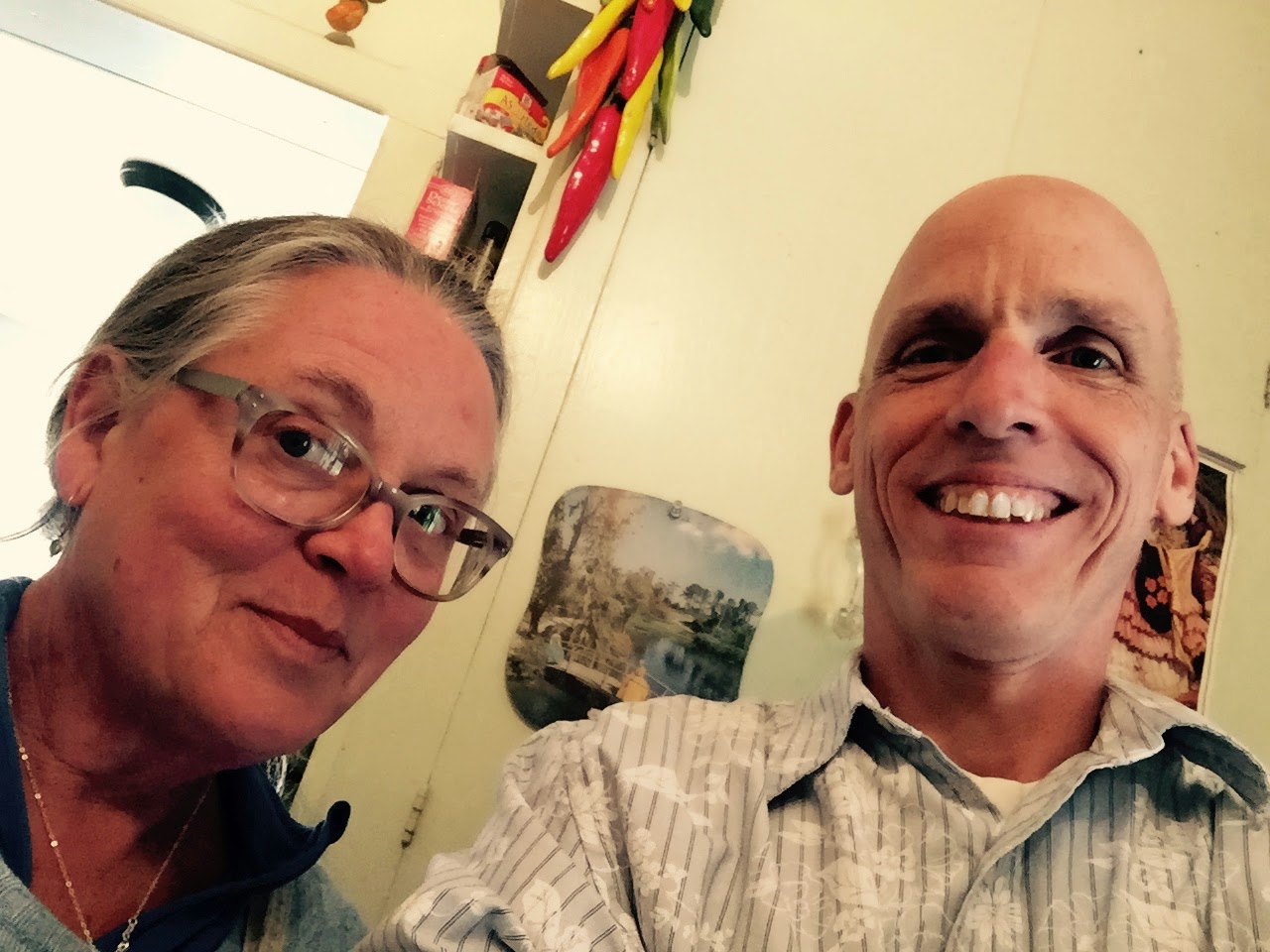 In the kitchen with the Cypress Gardens fan behind us.

What a good, good day. I have a new friend in real life. I told him that if he and Dave get back to Florida, they are welcome to come spend the night.
And after he left, the boys and I had more adventures and we moved Miss Dovey into the house because she is still alive and I want to give her one night of not having the stress of the cold. After spending weeks in the coop she actually left it yesterday and spent the whole night somewhere outside. 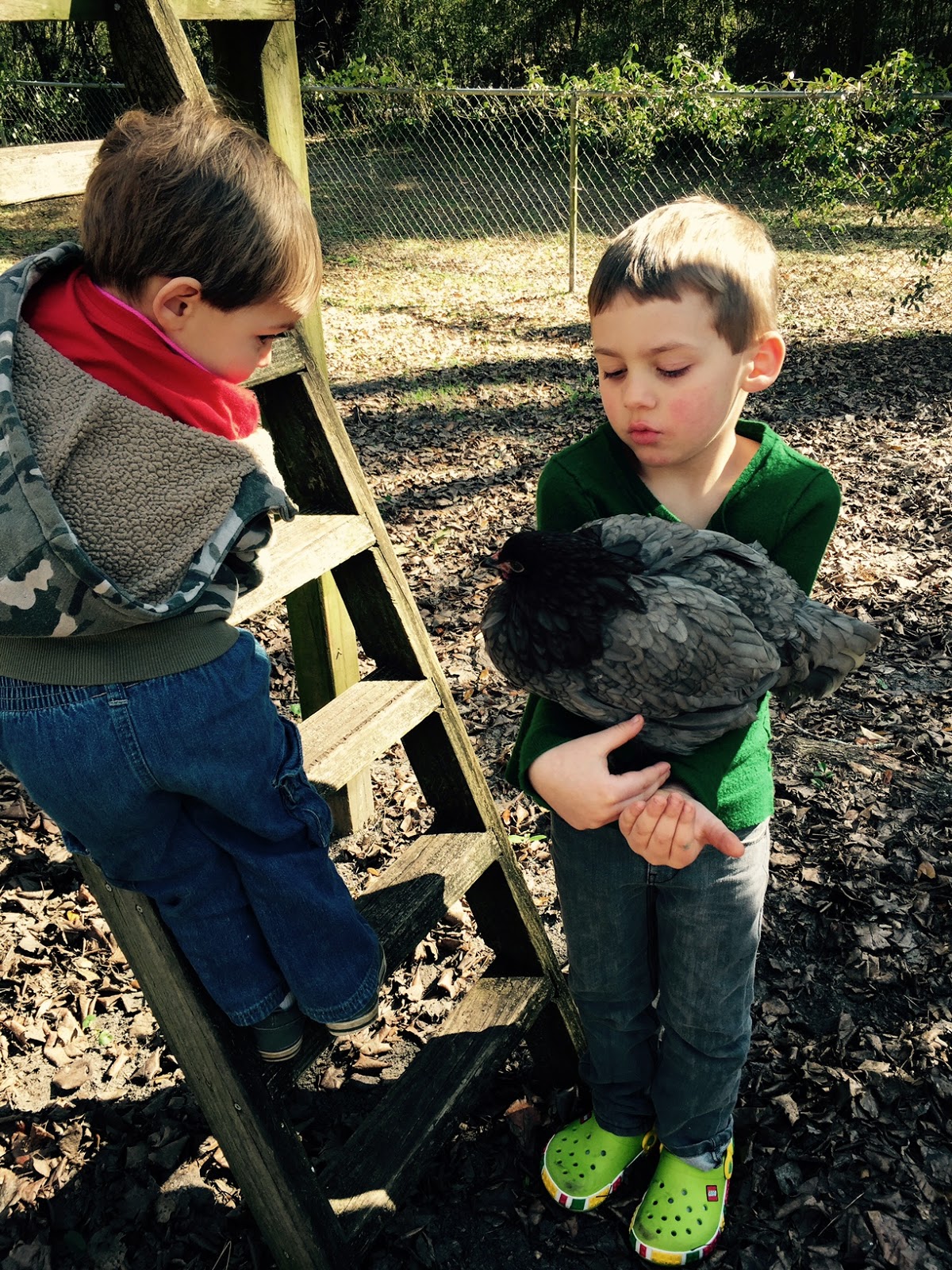 She is obviously far stronger than she appears and so I want to just give her one night of being warm. 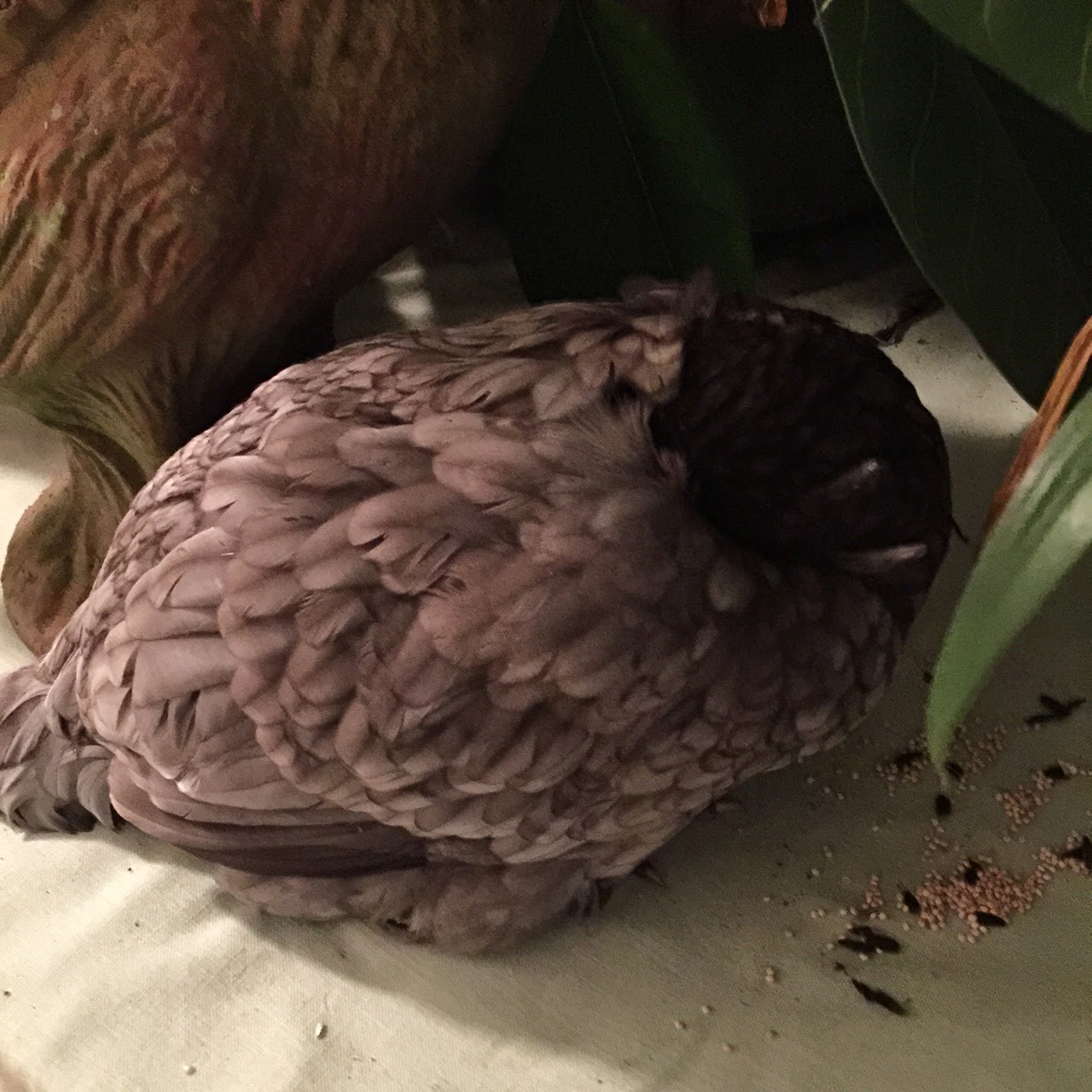 There she is, head tucked under her wing in what I call the "mud room" where the outdoor plants are wintering.
She is such a beautiful hen.

It's been a beautiful day.

Thank you, Steve, for making the drive here and back.
I've felt less anxiety today than I've felt in a week and a half.

For right now, all is well. I have a martini beside me, I have a stuffed chicken in the oven. (Yes! I am a huge hypocrite!) The SNL fortieth reunion's rebroadcast has just come on and I have greens for salad in the refrigerator.