Couldn't Have Been Much Better

We sure did have a good time. As may have been noted by me before, we always do have a good time with Lon and Lis. The boys drove down to the coast in one car and Lis and I drove in another. They had to leave directly this morning to get to a gig this afternoon in St. Augustine. The grass does not grow under their feet, let me just say.
We met up for lunch on the way down though and that was fun and Lis and I left them with the check and we headed on down the road to Apalachicola and not even stopping to unpack, went into River Lily which I say is the most estrogen-filled shop in three states. At least. There are usually a few stunned-looking men sitting on the bench in front of it. It was, in fact, too much for me yesterday. After about fifteen minutes I got the vapors (which is probably what women back in the olden days called anxiety when you come to think of it) and had to get out of there. The men had arrived by then and they had checked into our swank apartment and helped me unload the car Lis and I drove in and I almost passed out on the couch, my feet in my husband's lap.

After Lis got back we all rallied and had a drink and started playing cards. I have a special deck of cards that Lis gave me that we play with on these trips. 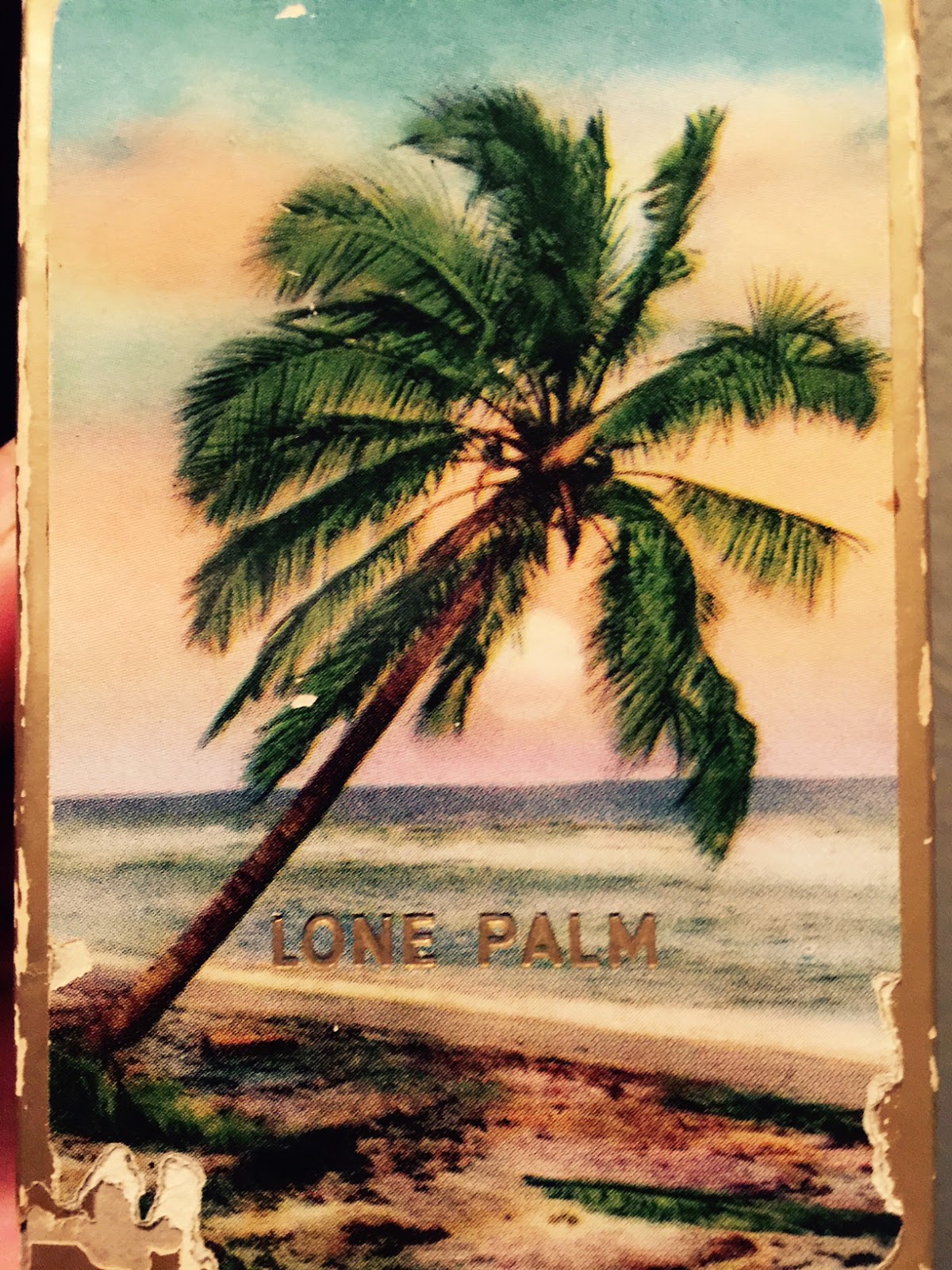 They were still pristine and wrapped in their cello when Lis gave them to me. We never use them except to play with Lon and Lis.

Our dinner reservation was for 8:45 so around seven-thirty we all took showers and got spiffed up and then we took each others' pictures. 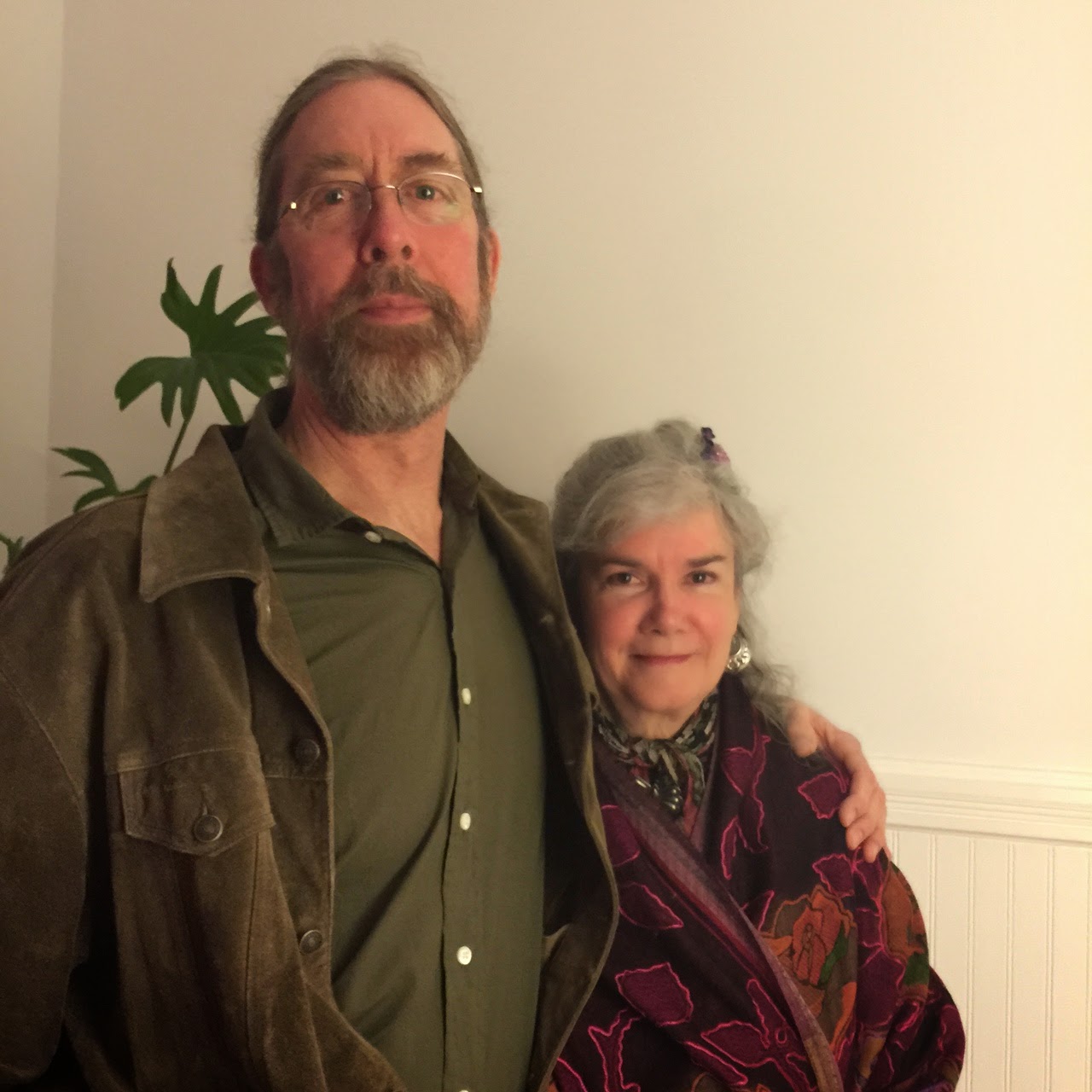 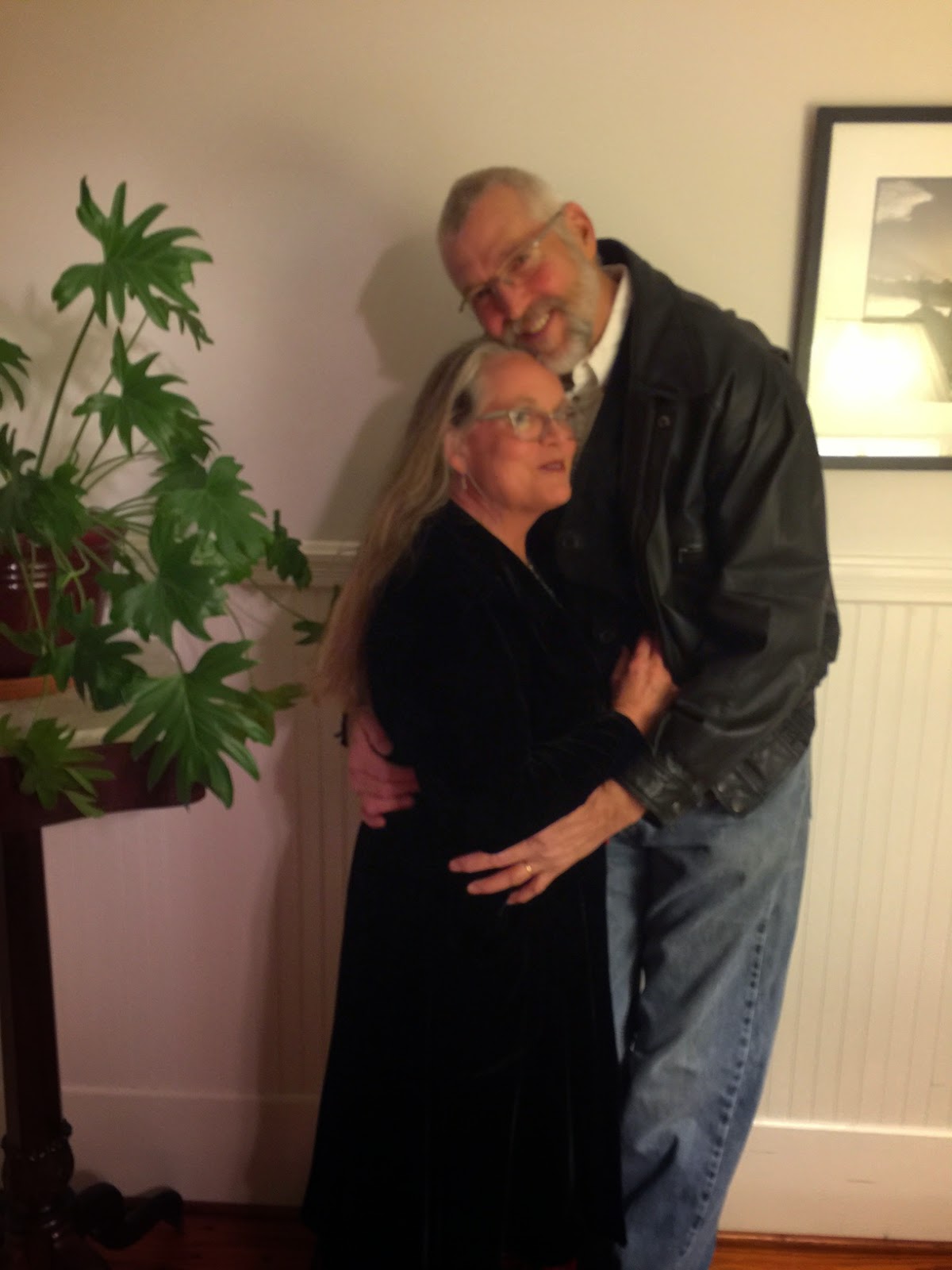 I got a good one of Lon and Lis kissing but Lis said I can't use that on the blog.
"I am a very private person!" she said. Which made us all laugh but the truth be told, she is. And I respect her wishes most emphatically.
We walked around the corner to The Owl Cafe. Here's what Lon and Lis looked like there. 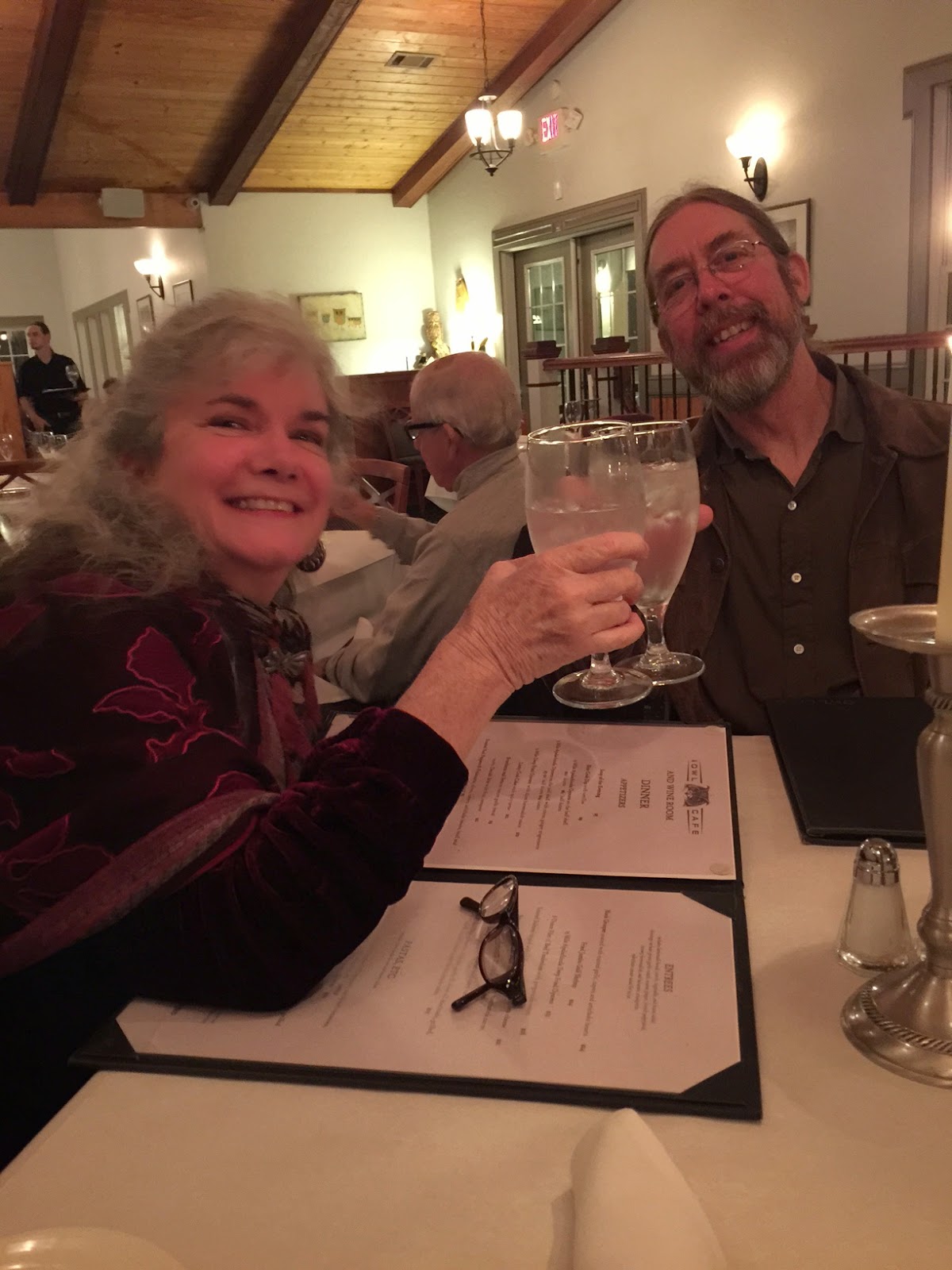 Oh, how splendid it all was!

We had good suppers and got THREE desserts to share even though we were stuffed to the gills. Tiramisu, chocolate mousse cake and pound cake with strawberries. And of all three, I think that pound cake was the best. It was an amazing pound cake and I've made a few of those in my lifetime. But this one was just perfect.

We headed back to the shack and took up our card game where we'd left off and things got, quite predictably, sillier and sillier. It was just...fun. So much fun.

We were all in our beds by midnight, I think, and Mr. Moon and I got up in time this morning to have coffee with them and say good-bye. I asked them if they couldn't just cancel their gig.
They said they couldn't.
Sigh.

So they left and it was a beautiful day, so much warmer than they said it was going to be, and Mr. Moon and I got to the Mexican Dinner, American Breakfast place just in time to get eggs and biscuits. We came on home and I was so happy to be back. All the chickens and ducks and Maurice were still alive and there were seven eggs in the hen house and Camellia had laid an egg in the pump house nest. We unpacked and sat around and read the paper and then Mr. Moon went out and planted the potatoes AND the peas and I cleaned out the hen house and took the trash and picked camellias. 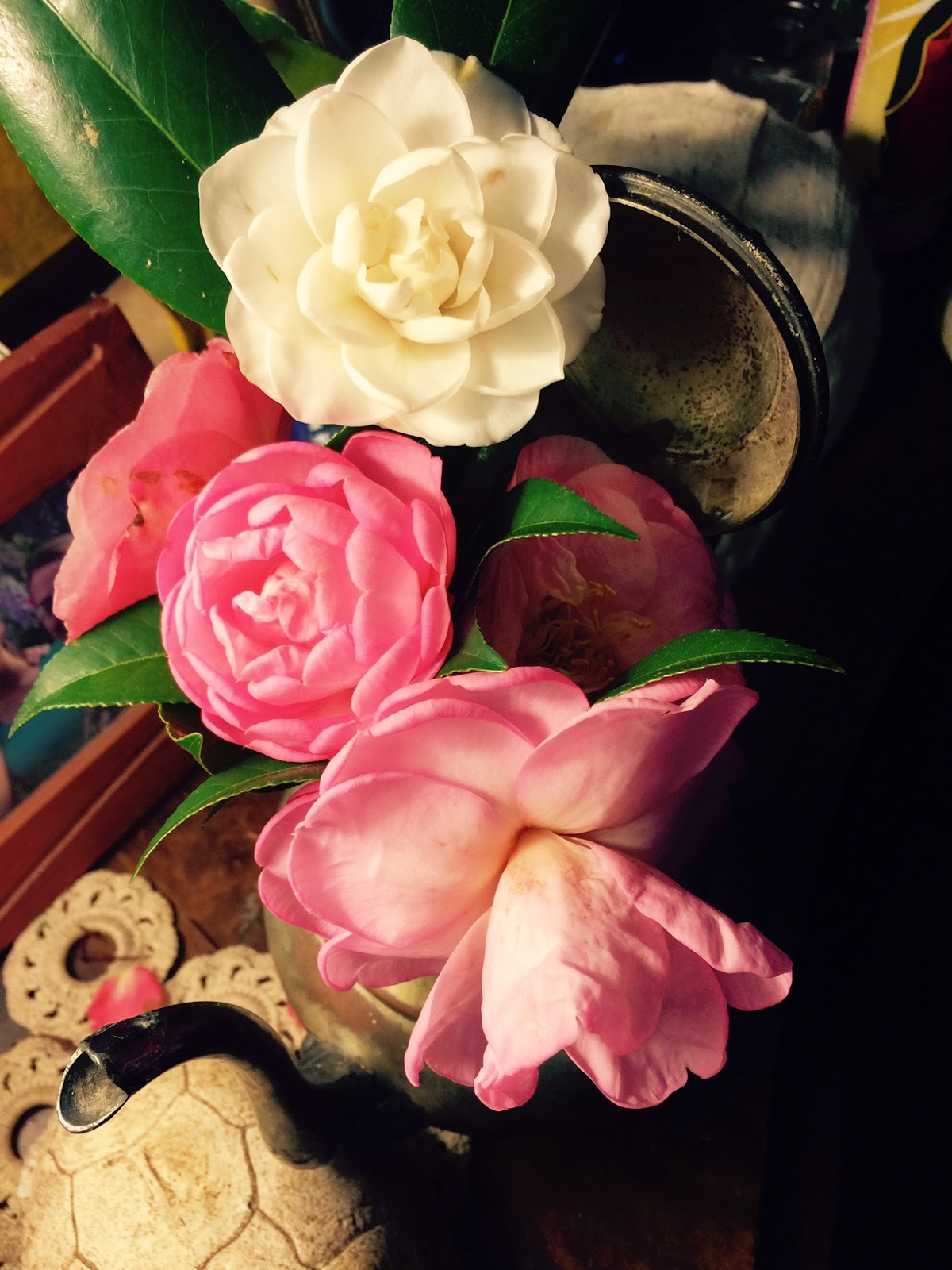 I never grow tired of them. Ever.

Okay- here's a funny thing- Saturday night my across-the-street neighbor's sister and her husband spent the night here. While we were gone. There was a big gathering for the funeral and they needed one more bedroom and since we weren't going to be here- no problem.
Before we left on Saturday, I stripped my bed and washed and dried the sheets, quick, quick because that's the decent thing to do. Right?
Mr. Moon and I made up the bed and tried to make things look nice and when we got home, I discovered a pair of his underwear, neatly folded on one of our night stands. No doubt they had stuck to the sheets in the laundry and gone undetected by us in our rush. They were perfectly clean, as were the sheets but still...
I told my husband that this was most certainly an indication that we do not have a future before us in the B&B industry. 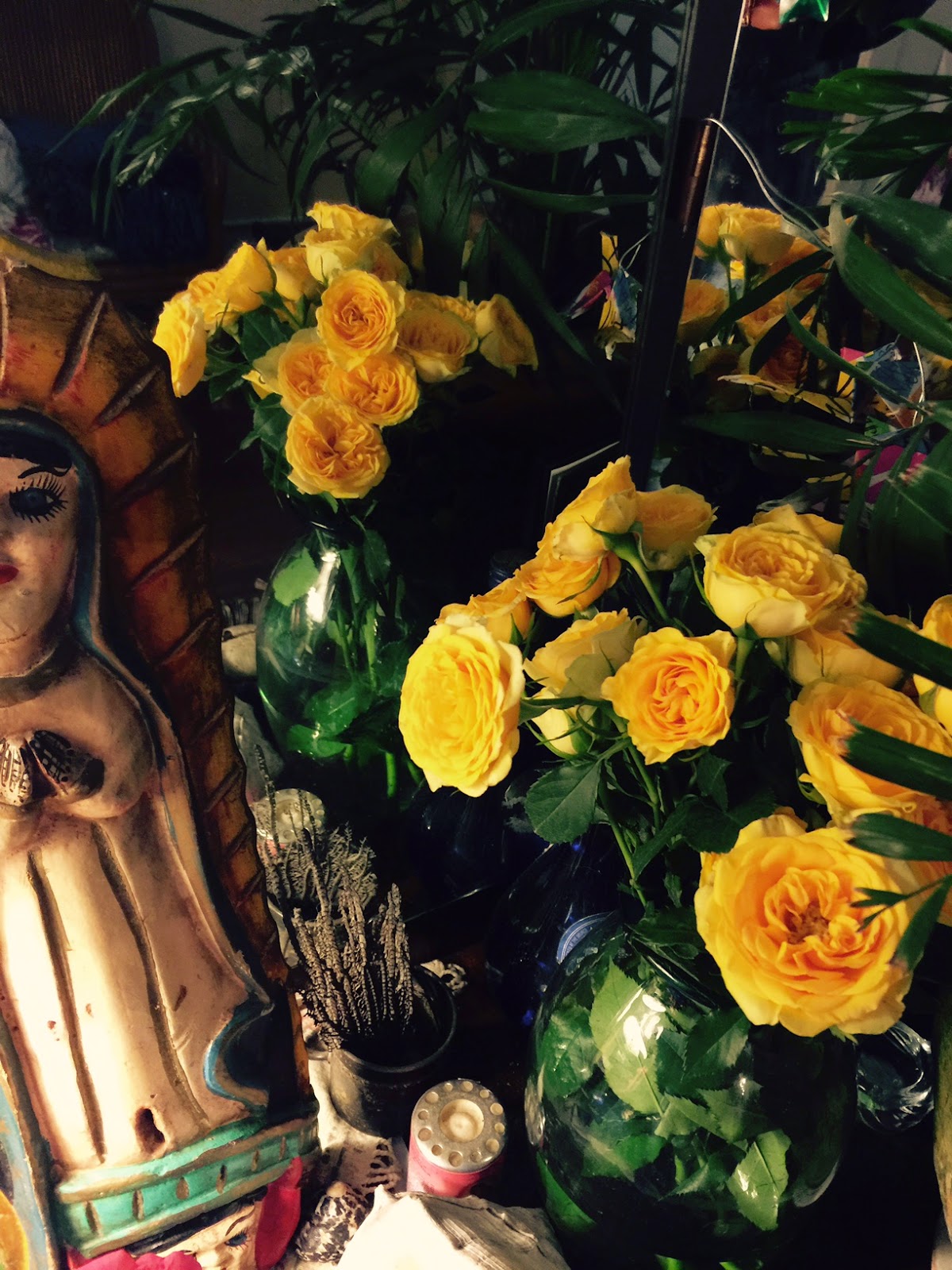 Those are some of the little roses Lily and the boys gave to me and Lis on Friday. I do love a yellow rose. And I was born in Texas.

I talked to Lis this afternoon and she told me that her song, Deep, was played last night on the hugely popular (my words, not hers) radio show, The Midnight Special on NPR.
Probably about the same time all of us were sitting around, playing cards and singing the theme song to Green Acres because...we were being silly and it was fun.

Which is what I feel being home. Time to do some more laundry, tidy up the kitchen so that I can make our supper. We stopped and got rock shrimp on the way home and I'm going to boil some up.

One more bit of news- I have seen Mick "Spare Parts" Jagger top a hen right in front of Elvis who ran over and put a stop to THAT nonsense and fucked the lady himself. Mick walked around grumbling in Roosterish for a bit but there was no cockfighting and the boy needs to learn to keep this stuff on the DL.