Ashes To Ashes And What Happens In The Meantime

As a woman I used to work with might say this evening, "It's kindly green out there."
And it is. Green or maybe amber. Some color that honestly, the air is not supposed to have. And it's drizzling a bit but the radar just shows a thin band of rain, not the sort of storm that usually comes after the light changes from healthy to looking like the skin color of someone about to start hurling from seasickness.

My god but it's been an exciting day around here!
First off, I went and got my tooth. When I discovered that a gold tooth would cost the same as a white one, I went directly for the gold. If I had all the money in the world, I'd get diamonds put in my teeth like Mick Jagger did. Like Diamond Teeth Mary McClain did. 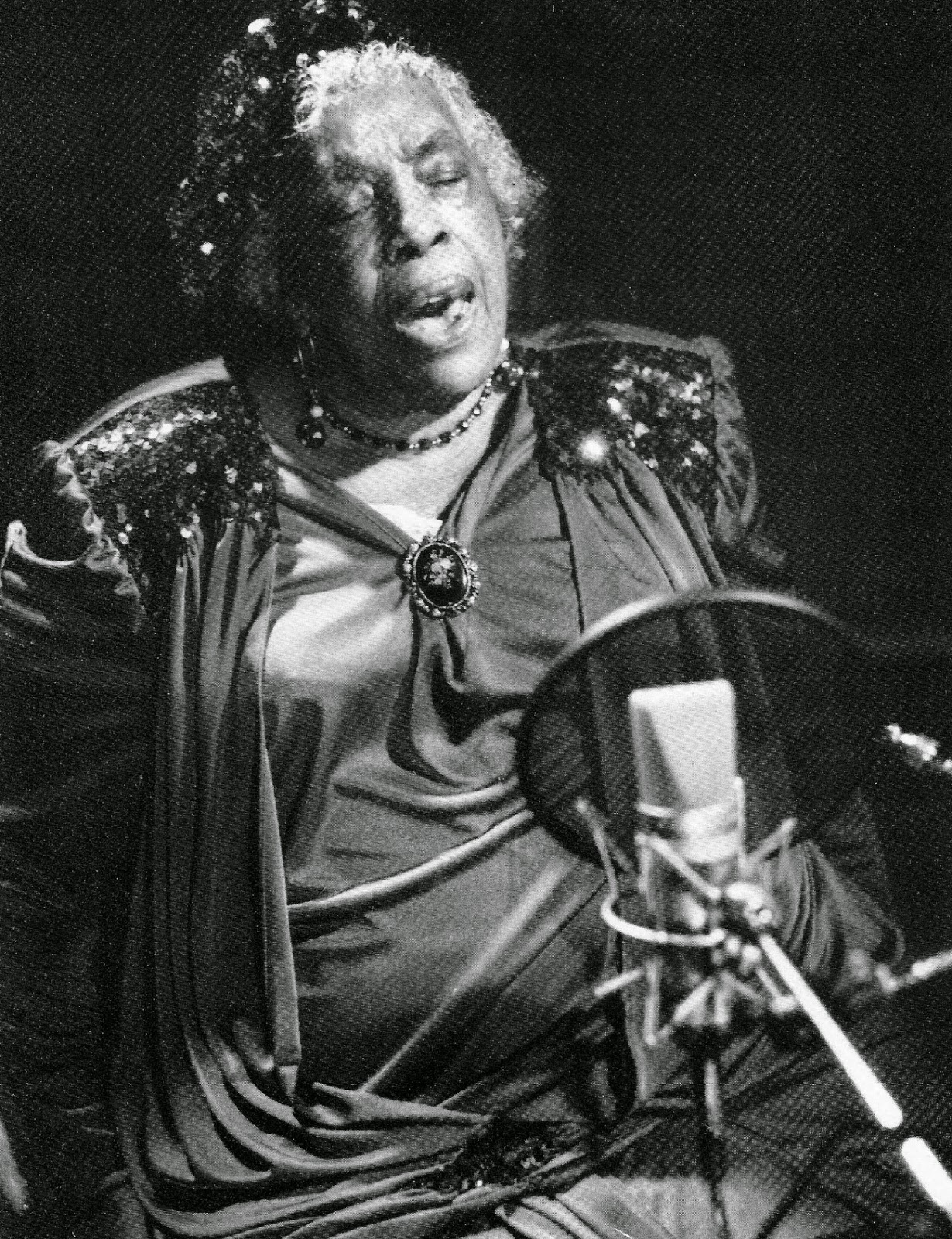 And let me tell you something- if you don't read another thing all damn day long, check out this link.
It's not very long. It's amazing. That woman was amazing. A friend of mine knew her, used to go listen to her sing. She's part of our history, our culture, and I doubt one person in ten thousand ever heard of her.

Anyway, yep, I got my gold tooth and I love it and after it was over I hugged my dentist and he hugged me back and I almost felt like he and I and the assistant should all hold hands for a moment of silence to recognize and consecrate this moment of the final result of a tooth which became abscessed about fourteen months ago. Of course I did not, but smiled real big, hopefully flashing my pretty new mouth jewelry and went to Publix.

Mr. Moon got home and I made his lunch and his snack bag and his coffee drink and his popcorn and got him on the road and then the boys came and that's when the excitement really began. It started off pretty regular and tame. We gathered eggs and the boys picked a carrot each from the garden and Owen declared them the BEST CARROTS IN THE WORLD! 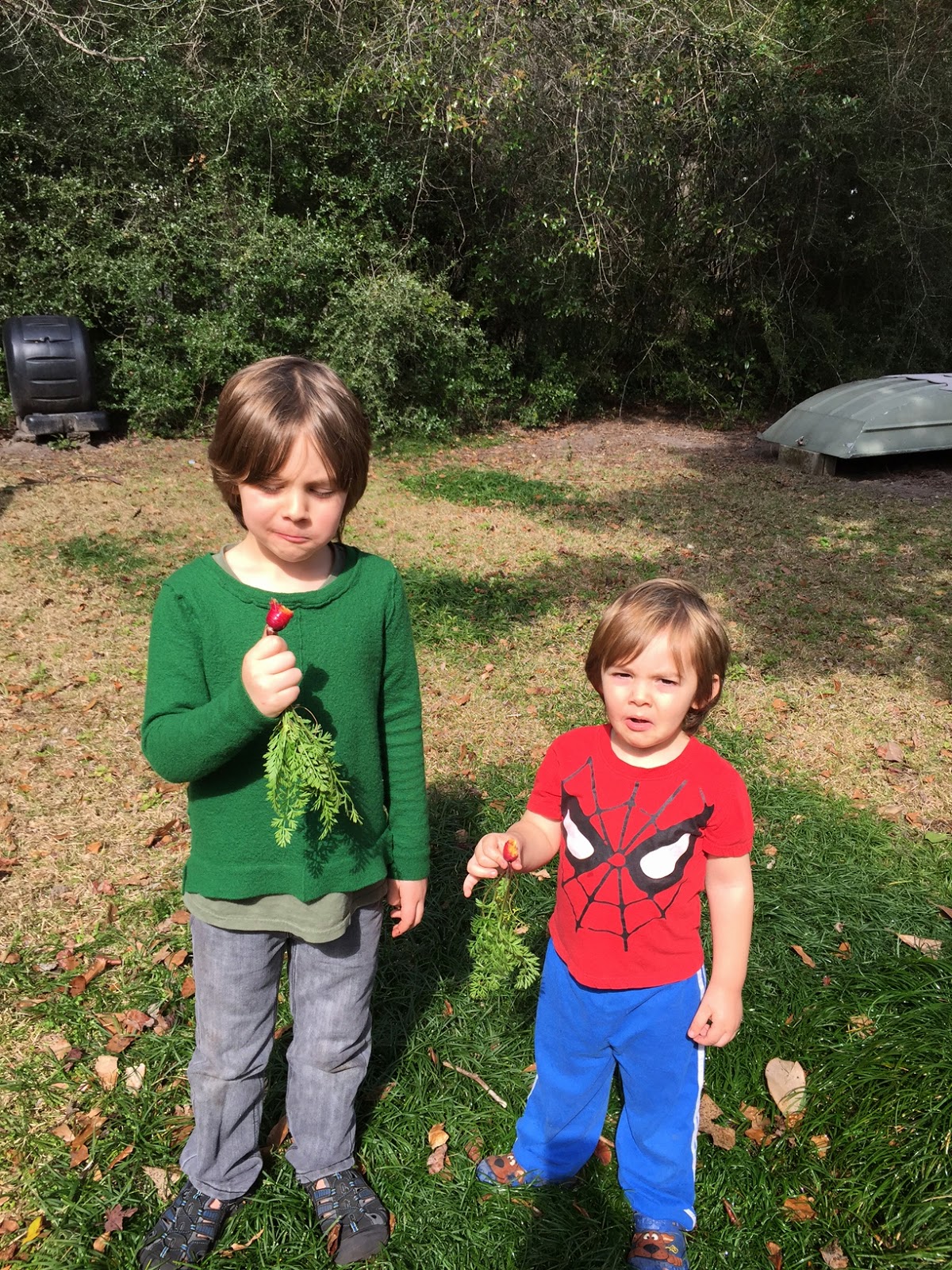 And although Gibson looks a bit uncertain in that picture he did indeed, love the carrot. He ate his and finished Owen's. They had snacks and then talked me into using my iPad (Owen) and phone (Gibson) to play games/watch videos on. I feel so guilty when I let them do this but I love snuggling on my bed with them and catching up on The New Yorker while they dance with the devil or at least his devices. When I finally told them that we were done with this activity, they gladly got up and we went outside to sit at the table and play a card game.
This is where the real fun began.

Owen and I were in a heated game of Go Fish with real cards meaning that he has to use his numbers and I was most impressed with how well he was doing and the chickens were all about and we actually got Mick crowing on video.

I realized that Gibson had poopy pants and so I told Owen to hold on, that we could continue our game after I cleaned his brother's butt. I got a warm washcloth, as I do, and we went into my old bedroom for the diaper change because that's where he likes me to change him and he had pooped the most gnarly poop I may ever have been personally involved with. I had to get another washcloth and there was poop everywhere and in the middle of all of this, I heard a chicken screaming in a way that I'd never heard a chicken scream. Then I realized that beneath the screaming of the chicken I could hear the screaming of Owen.
Oh god.
"Hold on, Gibson! I'll be right back!"
I ran to the back porch and down the steps and there was Owen, crying and crying. The chickens were agitato. I looked at Owen more closely and realized that his face was covered in something gray. Right beside him was a bucket where Mr. Moon had dumped ashes from the fire pit and it had been rained in so that the resulting goop was, well, goopy. And that was what was dripping off of Owen's face. Just his face.
What the motherfucking fuck?
"What happened, baby?" I asked him.
And he proceeded to tell me a story involving the chicken (Mick? Maybe?) flying up and getting ashes water all over his face and it HURT! And his EYES!
Before I could even try to make any sense of this, I led him into the house and tenderly washed his face with a wet washcloth to rid it of the ashes water and he was soon fine and I asked for an explanation again and I still have no idea what really happened. I think that possibly, Owen was trying to dump ashes water ON the chicken (there was a little shovel nearby) and the chicken might have flown up and the goop got on Owen's face.
Whatever, I am pretty sure that Owen will never mess with a chicken again in such a way. Live and learn, baby boy.
After that was all taken care of, I caught Gibson who was running around naked from the waist down and wrestled him back to the bed where I'd been changing him and the poopy diaper was still there and Owen followed me in. The stank of the diaper was so intense that Owen reeled back from the bed with a mighty bellow of revulsion and by that time, I was laughing so hard I could barely get Gibson's diaper and pants on.

After we'd all calmed down, we went back outside where we finished up Go Fish and the boys ate some Chex Mix and Owen and I tied. Then we started a game of Battle which Owen won. And then their daddy got here.

Lord have mercy. I'm so glad I was in a good mood and could just laugh at it all.
Being a grandmother gives me such good perspective on these things.

The pooped-upon bedspread is ready to go in the dryer. The chickens are all put up and seemingly no worse for ashes-water abuse. It's dark now and that drizzle has passed. I see by the weather report it's supposed to get down into the twenties again this weekend which makes me less worried about getting the potatoes into the ground. I got to talk to May this afternoon and Jessie started working days today. Mr. Moon is off trying to make us a living and The Great British Bake Off is on tonight.
I have a new gold tooth.

I need a new broom soon. And can afford to buy one.

I have thirty-one eggs in my refrigerator.

I am the richest woman in the world.