Minding My Peas and (Barbe)Cues 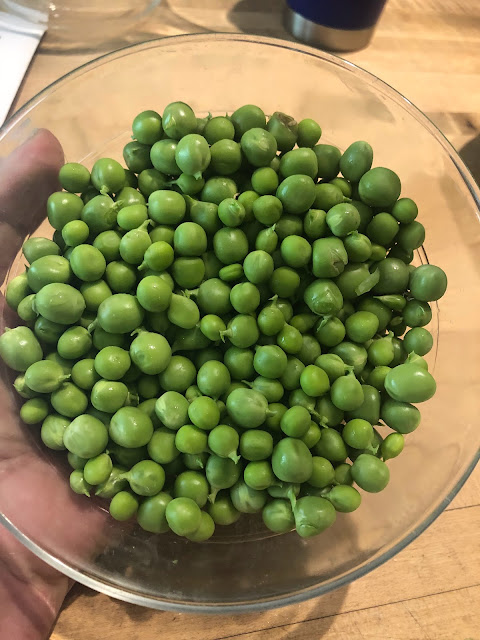 That may well be some of the last of the green peas. I have enjoyed them so much this year. Sweet as candy. Delicious cooked or raw. Mr. Moon has even eaten some and he really does not like peas. But it's hard not to like these.

Our evening with Owen was lovely. We watched the British Bake Off while we ate our chicken parm which he claimed was even better than his mama's but I doubt that. Lily is an excellent cook. The chocolate ice cream was just ridiculously good. He helped me get the ice cream maker all set up and ready to go. He is just a very fine young man. He was tired after supper and took his shower and got in his bed and I kissed him good night and that was that.

This morning we had our pancakes and then the three of us played Yahtzee. I'm glad I got that game out the other day. I'd forgotten how fun it is. Owen won today, of course. I felt so grandparent-ish, playing a game like that with him. We met up with Lily and the other two kids after that at the Hilltop for lunch. 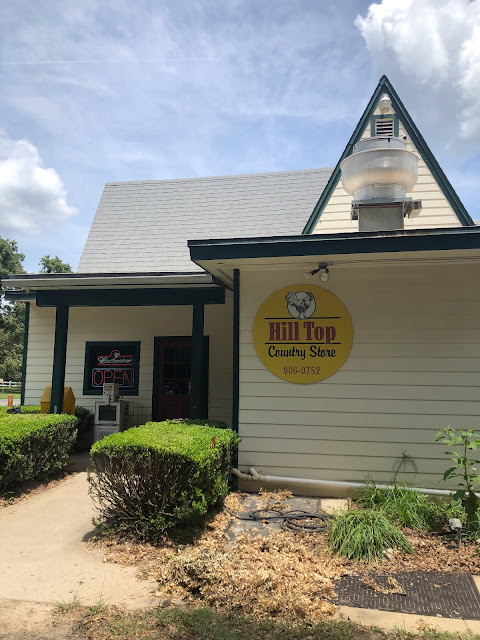 There was some sort of craft fair going on down the road and there's also a motorcycle thing happening in Tallahassee and even at 1:30 the place was crowded. It's not a big place and I couldn't deal with all the people waiting for their orders so I went outside and vultured the people eating at the tables there in order to snag one for our crowd. 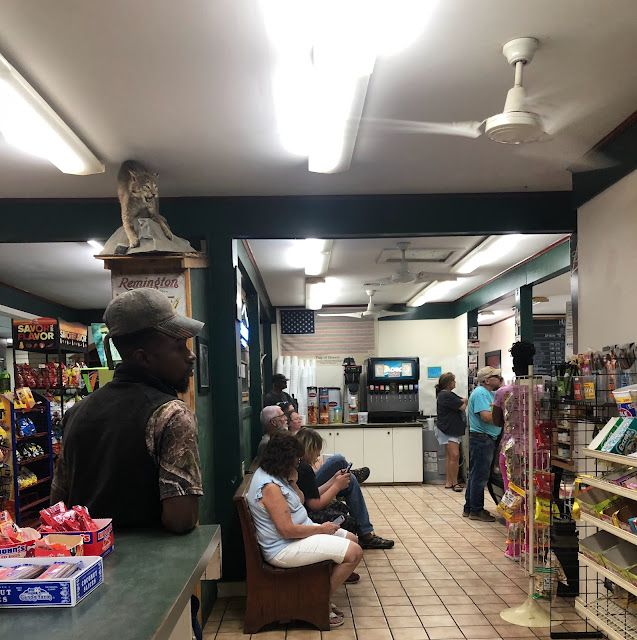 It's set up oddly. On the left there, you can see the few shelves of convenience store groceries they carry but their main business is the selling of food made to order. You stand at the counter and look at the two huge chalkboards and one white board with menu items, make your choice, order, and then wait. For quite awhile, usually. You can get everything there from subs to salads to fish dinners to shrimp po'boys to barbecue to Reubens to Cubans. The side orders range from the usual cole slaws and french fries to fried okra, green beans, fried green tomatoes, potato salad, onion rings and so forth. There is also a cold case with cakes and pies.
When you get your food, they call your name and you go collect a styrofoam box with an order ticket on it and you take that and your drink (they have excellent iced tea) up to the counter and pay and then you can either take it with you or find a seat.
The food is not very healthy nor is it fantastic but it is food and generally good and there is a grand variety of it and it's the only place to get food between Tallahassee and Monticello.
For now, anyway. I imagine things will be changing.
There are always workers of every kind there along with hunters, fishermen, sheriffs in their full regalia, families who are treating themselves to a meal out, folks just driving the backroads for sightseeing, people who don't have time to cook, and, today, lots of motorcycle riders. Like the Wacissa river, like a watering hole in the Serengeti, like the DMV, it is a place where all gather peacefully. Today Patsy Cline was playing on the sound system and the man running the cash register was singing the words to "Crazy" right along with Patsy. I had a pork barbecue sandwich which was delicious and a side of coleslaw which was definitely made in-house and was actually incredibly good.
I know I've written about the Hilltop before but it's a part of the local color and it's also a part of our lives.
Everything seems to be fine in chicken world. I saw Darla and her kids taking a dirt bath today, wallowing down into the soil of the kitchen garden and it was too cute, watching those babies sift the gritty dirt through their little wings. I saw one stand up to his full hight and I really cannot believe how much they've grown in such a short time.
It poured rain here for a very short amount of time yesterday evening and today has been the more beautiful for it. Everything as green as it can possibly be, the birds happy, Daddy cardinals feeding their young on the feeder, and the sun still luminous and not yet a burning coal in the blue, blue sky yet.
It'll get there but for now, it's all pretty much a joy.
Love...Ms. Moon