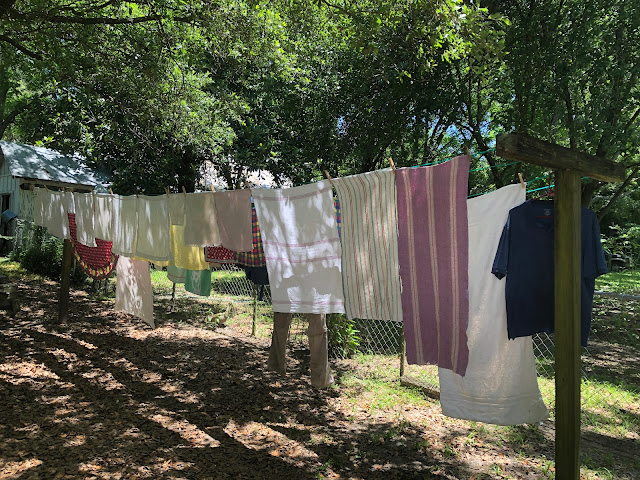 There is no way to justify my laundry-on-the-line photos except to say, as I have so many times before, that sight is like strings of prayer flags for me. The holy household trinity of air, sun, and water made visible in purpose in my own life.

I decided to get out into the garden this morning to weed and tidy up a bit which I did. I pulled the spent pea vines and the two last chard plants and weeded around the cucumbers and the squash which once again, is not producing anything. The cucumbers are so disappointing this year! They are just sitting there, small bonsai plants that do bloom but with so little growth, so few baby cukes to show. I pitchforked some of the composting and composted chicken-shit hay into my garden cart and laid some of that down beside them as mulch and as fertilizer. It cannot hurt them. I weeded around some other areas and took this what-was-I-thinking photo of a few fine-looking green tomatoes. 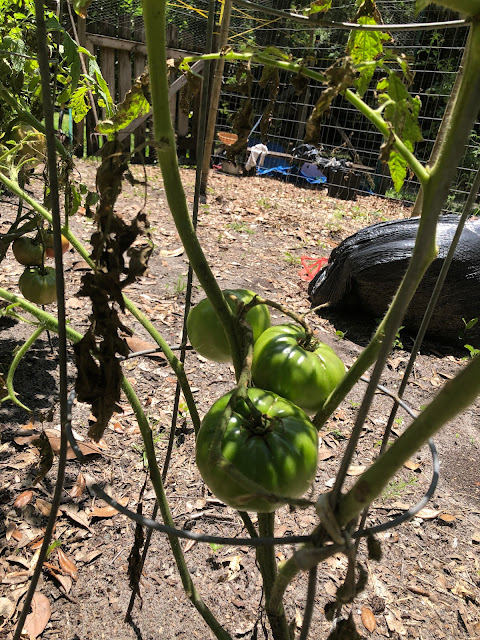 I can only plead guilty of being practically in a state of heat exhaustion by then. Sweat soaked my clothes and dripped off my head and finally I decided that enough was enough and came in and ate a late lunch.
Last night was so precious. I had the best time. I think we all did. Lis and I laughed so hard at one point that I thought we'd fall out of our chairs. I love the way the four of us are together. We are like an old married couple, but an old married foursome instead. Not in any sort of kinky sense at all (trust me) but in the way that we understand each other and feel so safe around each other. We have our jokes and our shorthand, our memories of the best times and of hard times, of many meals together, many experiences together, much sweetness.
The funny thing is how much Lis and Glen are alike and how much Lon and I are alike which I guess goes a long way in explaining why we get along so well as friends. Not in every way, of course, but in spirits. Lis and Mr. Moon are the adventurous ones, the ones who long to travel and do new things while Lon and I are the homebodies, the ones mostly content in the spaces where we live.
Anyway, it was a lovely evening.
After I had my lunch this afternoon I decided to go lay down on my bed and rest my heat-exhausted body. Which I did. It was heaven. I read some from my pile of New Yorkers which never gets smaller, and Jack came to cuddle with me. After awhile, the words I was reading made less and less sense and I put down my magazine and closed my eyes. Jack, who had been getting scritches as I read, was not well-pleased and tapped my hand with his paw, as he does, when he wants more but he settled down and we fell asleep. I woke up to a huge boom of thunder, shot out of the bed and rushed outside to get my laundry in. By the time I'd gotten most of it, it was already wet enough again to need to go in the dryer and I didn't even take it all down- it was raining so hard that I just figured it wasn't worth it. As I hurried back to the house with my basket of very damp laundry, I realized it was not only pouring rain but also hailing. We do not get hail that often and this was small but it was hail. Any type of ice that falls from the sky here is an event.
It's not raining now but thunder is still rumbling off in the distance and I am grateful for the amount we got. The garden was as dry as a desert, even though we got so much rain last week.
Oh! Over the last few days, I have listened to this book. 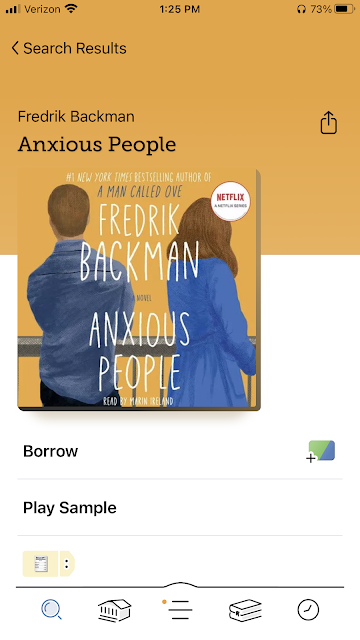 Those of you who have read A Man Called Ove know how intricately and beautifully the author, Fredrik Backman, can weave a story. He is one of the best sorts of writers, the kind whom you can let lead you through the world they have created with perfect trust.
I wished it had not ended but it ended well. And endings, I think, are the hardest thing to write.
Well, that's my take on life today.
Love...Ms. Moon
Posted by Ms. Moon at 6:05 PM