Gracious A La Vida And Chicken Pot Pies, Too

I woke up this morning around dawn and thought, "Gee. I do not feel good." I went back to sleep and next thing I knew it was almost ten and my husband had come to check on me to see if I was still breathing. I was. Not only was I breathing, I was having one of the worst dreams of my life. It was one of my dreams where my husband has left me, I don't know how I'm going to take care of my children, and my home is completely filled with things I need desperately to get rid of, including baby clothes and toys that I've somehow forgotten to give away and in this dream, there were also many things I'd made and embroidered years before that I looked at in wonder, having forgotten I'd made them and the clutter- oh! the clutter. An entire upstairs of clutter and the downstairs even worse including the Christmas tree that always seems to stand in as a symbol of things that I am responsible to get rid of. On top of all of that, I had been completely paralyzed with some sort of mental illness and could not even manage to brush my hair or get dressed and I needed to feed my children and I could not cook nor did I know if I even had any food.
So, yes. Combine a day of junk-and-treasure shopping, a vaccination reaction, and probably a fever and you get your usual neurosis nightmare on steroids. The whole mental illness thing was a completely new and horrendous addition to the already terrifying dreamscape. But also interesting as I truly did go through some difficult times with depression and anxiety while my children were younger although I never got to the point where I absolutely could not function as a mother.
So I cried a little as I was waking up and my husband held me and we agreed that we both felt fairly shitty and we laughed at how useless we were.
But it wasn't horrible. Our arms ache at the injection site and we're very, very slow but we've managed to move about some, he doing some repairs and me a little laundry and sweeping, and I watered the porch plants. One of my begonias is blooming and it's such a sweet bloom even though this is a lousy picture. 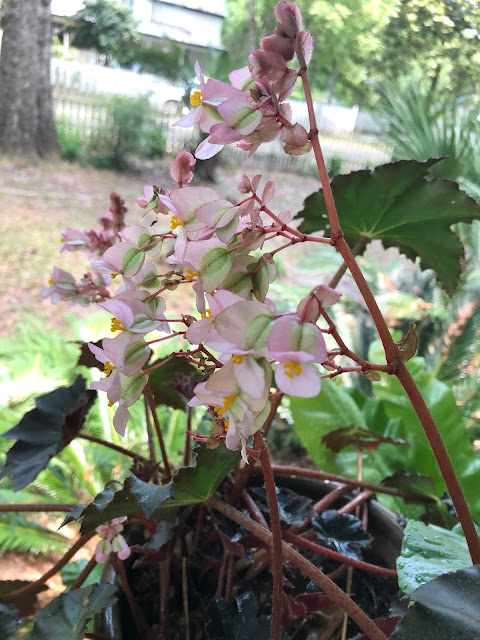 The pink of the little flowers is as pale as a Kewpie doll's cheeks but in real life, they are a delight. I also discovered that one of my small succulents is sending out a bloom and that the ginger root I put in some dirt to see if it would sprout has indeed finally, after I'd almost given up, a shoot coming up. This is grocery store ginger and I've never, for some reason, planted any before so I am excited about that.
When I shopped on Monday, I bought two frozen chicken pot pies in case I did not feel like cooking after our vaccinations and I am patting myself on the back for that. It's sort of a ritual for us to have frozen chicken pot pies after some sort of dental or medical thing and we laugh about it and we do enjoy them. So there will be no real cooking and I plan on going to bed early, even though I did sleep for eleven hours last night. I laid down on my bed this afternoon and read a New Yorker magazine from the Guilt Pile (as a book I just read referred to the issues not gotten to yet) and one of the articles was about a Brazilian musician named Caetano Velosa who is extremely famous but whom I'd never heard of and that sent me down a Youtube wormhole that lead to another singer, Mercedes Sosa, and a video of her singing Gracious A La Vida with Joan Baez and I thought about the wonders of living in a time where I can so directly access information and performances so instantly and although I think that the internet may end up being the death of us all, there are miracles to be considered there, one of them which is surely being able to lie on one's bed watching the beautiful face and listening to the beautiful voice of a woman I'd never heard of in my entire life until the crazy-ass, internet led me there.
And Joan Baez, too.
So. That is that. Tomorrow I plan to be ALL WELL so that I can pick up August and Levon from their schools and tend to them until their daddy gets off work. We may not be doing any diet coke and mentos experiments and we may be watching a few too many videos but who cares?
Love...Ms. Moon
Posted by Ms. Moon at 7:05 PM