A Day Date In The Deep South 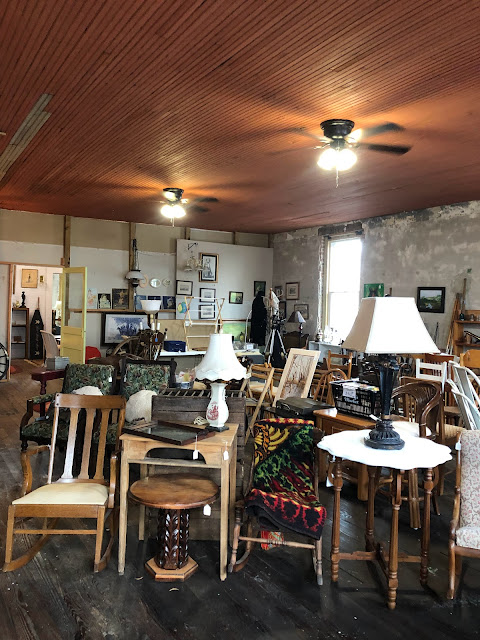 It's been a very pleasant day here in Jefferson County, Florida. I spent a leisurely morning replacing some overall strap hardware and taking up a dress a few inches. I'd been meaning to get around to those things for awhile now and it's nice to have them done.

Mr. Moon had errands in town this morning and didn't get back until it was time to leave to go to Monticello to get our second boosters. It was another excellent experience there with a nurse who's shot-giving abilities were the best I've ever personally encountered. I swear- I felt almost nothing and certainly no pain. Glen said the same. Taking the band-aid off later hurt far more than the jab had.

Since neither one of us had eaten lunch we decided to drop into the Rev and get our lunch there. A date! We were on a date. They were out of my favorite chicken salad so I got a Greek salad as did Mr. Moon. Our server, who bore a passing resemblance to Chloe Sevigny was brand new and when she brought our salads I realized that they had no feta cheese and HELLO! What is a Greek salad without feta cheese? A green salad with some olives and peppers on it, that's what. We pointed this out and she brought us each some feta. Why is it that restaurant salads just get bigger and bigger as you eat them? Have you noticed this? You can eat on that sucker until you're bored with the eating of it and you still seemingly have as much as you did when the plate was put in front of you.
The people at the table beside us seemed to be discussing the possible running of one of the women for the school board. Or school superintendent. Something. I had a hard time eavesdropping as we were outside and there was lots of ambient traffic noise.
Note: If you do not want to be eavesdropped on, don't sit next to me.
She appeared to be making a pitch to a guy whom I heard say that he was born and raised in Jefferson County and I swear he said his folks went back nine generations here but I find that hard to believe. The woman had a sort of pinched face, blond hair that didn't quite know what style it was supposed to be, and had lots to say. I could not figure out if she was affiliated with Republicans or Democrats but then I definitely heard the man ask her, "Do you think you can you work both sides of the aisle?" and she said, "I think so. I can attempt to seem fairly moderate. And as far as I can tell, we don't need the Democrats at all."
All righty then!
I did not stand up and smack her. You would have been proud of me.

After lunch we went into Wag the Dog. They had nothing I needed but it was nice to meander about, treasure hunting. Then we crossed the street to an actual antique shop, one that I have talked about before, and spent some time checking out their merchandise. They have very nice stuff and when I'm there I always find myself wishing that I had some empty spaces to fill but the fact is, I really don't. I do have some  stuff that I'd love to replace but is it necessary? No. It is not.
There's an entire upstairs portion of the store where they keep less valuable things, things that are smaller, and we trudged up there to check it out. They have sold the chaise lounge that I really thought I wanted at one point and then decided I did not and my heart did not hurt to see it gone. When I had explored all the spaces and rooms up there, I took the picture you see above. There is something that feels very good about that upstairs area. I could be all wrong about this but to me, I get a sense of light-heartedness about it. As if happy people had lived there. I hope so. I am sure that at one point in the building's history, it had been a commercial enterprise downstairs with the family, probably, living upstairs. It's a corner building a block from the courthouse and I bet it was prime property when Monticello was more of a going concern. Red brick, still solid and apparently in decent repair. We didn't find anything to buy there either although I sure could have. There was a large, unusual vase, labeled simply "yellow vase with swirls". It had no markings on it. I'd never seen one like it and I could just see it with a palm frond or a split-leaf philodendron leaf in it on my table in the hallway and now I'm having not-buyer's regret.
Ah well, I can always go back and get it if it's still there.

My calf muscle feels better today and I think that resting it has been good for it. I am already starting to feel the effects of the booster, I think. A bit achy and tired. It's starting to get really hot here. Spring has taken its bow, the curtain has lowered on it and is rising again to the appearance of summer. There is only a smattering of applause from the audience as we wipe our brows and dream of rivers and springs. Hurricane season begins on June 1 and as always, we know that we must become observant and wary.

Here's a magnolia that Jessie picked for me yesterday from a tree beside our garden that I always forget is even there.