I Am So Lucky 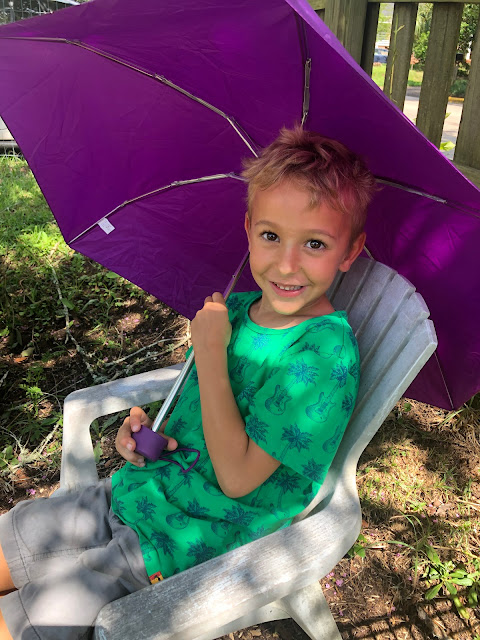 I asked August where he got that coolio shirt today. He said, "From Mr. Coolio."
He's a sassy child, that one.

I spent the afternoon with him and his brother at their house and although I know that Jessie and Vergil would really appreciate it if I took those guys to the park to get some ya-ya's out, I just can't deal with the heat. So we stayed inside for the most part, reading books (Captain Underpants is very popular with August right now), playing games, and watching nature videos about octopuses and other amazing creatures. The regular. The usual. Which of course is the best. Today's special treat was Healthy Choice fudge bars. I'd bought a box of them at Costco before I got there and gave them both one and then Vergil came out of his work space and his eyes lit up and I offered him one too. Mr. Moon and I have been eating one every evening almost after supper. It's sort of like a treat and it's cold and it's chocolate. Ish.

So yeah, before I got to the Weatherfords I did my Publix and Costco shopping, rushing, rushing, trying to get to Jessie's house on time. But it all worked out. After I left the boys, I went and picked up some things from Lowe's that Mr. Moon needed. Trust me when I say that I no more wanted to do that than I wanted to go to a Guns and Roses Tribute show which is to say- oh god, oh god, oh god, oh god. But it was okay. Glen had told me just to ask for Walter at the Pro Desk. Who knew Lowe's had a Pro Desk? Mr. Moon, that's who.
Walter was lovely and even toted the things out to my car and they weren't heavy or bulky. I could have done it. So overall, it was not a bad experience.
I had a dream the other night that I had gotten a job at Costco. This is new territory for me and Dreamworld. It was sort of fun, that job. Mostly because all of the employees were awesome and I'm sure that's where the dream came from- there ARE indeed Costco employees who seem like people I would not mind hanging out with. In my dream, they let the workers go to whatever department they wanted to work in for the day which was also pretty cool. Unfortunately, they did not allow the new hires to use a scanner gun but I understood that I needed to get my bonafides before I was trusted with something like that. It was an odd dream, to say the least, but not unpleasant.

Mr. Moon has spent weeks working on the deck between the house and the old kitchen and it is coming along. It is hard work. That man! Tomorrow Lon is going to come over and help him which is so tremendous. I mean- that's a friend! But today he worked by himself and now he's had a shower and he's made us martinis and I am so very glad to be home. The spray washers came back and redid some areas that they felt were not quite up to their standards. I surely hadn't noticed anything. The whiteness of it all sort of freaks me out. Even when we moved in here, it wasn't this pristine by any means. Glen is shocked. He just told me that he had no idea it would clean up this well. I just think about the places on the back door into the hallway that I have tried over the years to clean with all sorts of alchemic formulas only to fail- the dark stains of my hands and the hands of so many others along with the black dirt of Lloyd never got anywhere NEAR pristine.
Whoo boy. They call them professionals for a reason, I guess.

Tomorrow I will try and get my house back together again. This could take awhile.

Meanwhile, this is making my heart so happy. 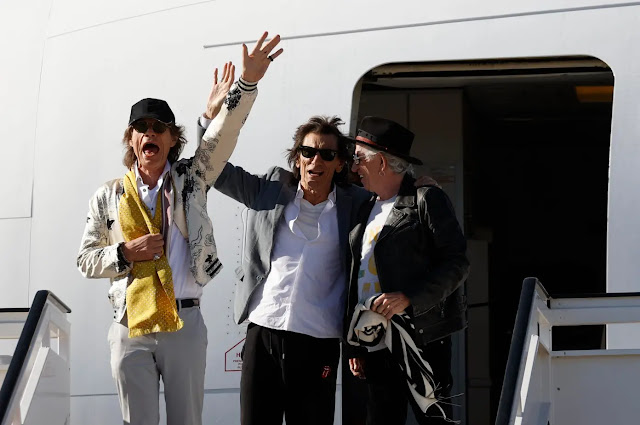 The beautiful old boys have arrived in Madrid for their sixtieth anniversary tour of Europe. I wish Charley Watts was with them but I know he is in spirit. He is part of every song they play.

Let's take a moment to ponder the magnificence of this achievement. I can't wait to see some of the concert footage. I assure you that it will be something fine.