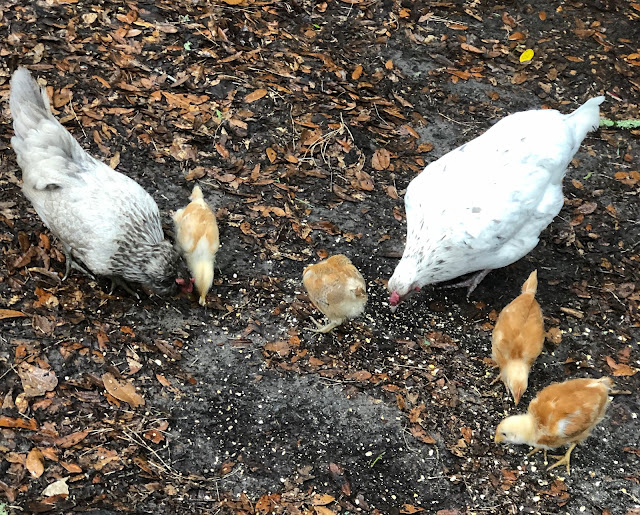 Here's what the two little families looked like this morning eating their scratch corn. The moms do hang out fairly close together for long periods of time. I can see them all now, scratching in the magnolia leaves. They are definitely growing out some tail feathers, some wings. After all this time I am still very tentative about trying to figure out roosters from hens at such a young stage. I am really hoping that we don't have more than one rooster. Two at the most. But they are what they are, even if I can't tell at this point.

Tomorrow is May's birthday! And today, I met up with her and with Billy for pedicures and lunch. It was so much fun. 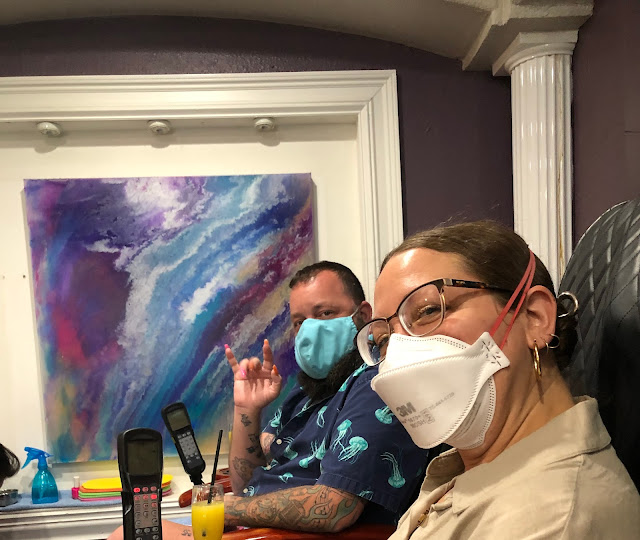 I had not seen Billy in forever.
"What's it been?" I asked him. "Since 1973?"
"I think so," he said.
"I'd just graduated high school," I said. Which is true.
"Me too!" he said, which is not true. "It was an important period of our lives!"
Whenever Billy and I see each other I feel as if it's an important period of our lives. Or mine at least. So there is that.
May got bright red toenails, Billy got neon pink, and I got mermaid/witchy green. I loved my nail tech guy. His name was Tommy. After he painted my nails he said, "You want some bling?"
"What? Who me? Bling?"
I first said no and then I said, "Oh, what the hell," and this is what they looked like. 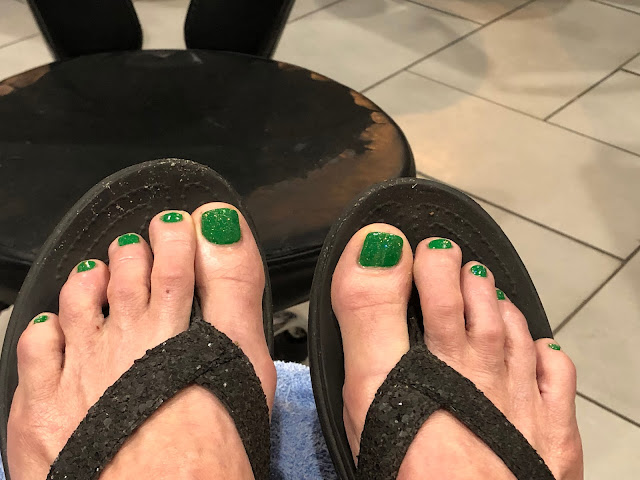 You can't really tell but they are glittery. You will note I'm wearing my "good" formal Croc flip-flops. Not the ones that I wear around here, but only for going-to-town.
I'm a high-class girl.
Of course I messed up one of my toenails. Please don't tell Tommy. He was so careful to get my shoes on my feet without smudging. I really don't deserve Tommy, obviously.
We went to a place for lunch where I'd never been and Michael joined us. It's a Mexican place right next to Joann's Fabrics and I've wondered about it for a long time. It was really good! But oh my god. There was a situation.
We were eating outside, all just chatting away when suddenly Billy pushed his chair back and made a little eek sound and then said, "Spider!" and although I am not afraid of spiders, I have to tell you that this was one of the biggest spiders I've ever seen and probably would have had a small heart attack if it had jumped onto my own personal person. It was as big around as a large tangerine. At least. It was a daunting spider.
The poor creature crawled over to the table next to us where a group of about six women was eating. They freaked out. One of them thought it was a fake spider until she saw it moving. The staff was alerted and no one knew quite what to do until one of the ladies at the table actually smashed the thing on their table which made me feel sick. I mean- you just don't smash things that big. You call wildlife control officers or you trap them and put them in some bushes or something.
I should have done that. But I didn't.
And then it took the server about ten minutes to clean up the crime scene and I'm sure she won't forget that experience for awhile.
But overall, it was a very delightful lunch.
When we all went our separate ways, I decided to go to Tuesday Morning to shop for a mattress pad which was fine except that I had forgotten to give May her pie which I had carefully tucked into a thermal bag with a bag of ice in it. She had to come back for me in the store! How could I have forgotten the pie?
Because I forget EVERYTHING these days. It's a wonder and a miracle I remembered to make it and bring it. So I got her pie for her and then returned to the store and bought the mattress pad and came home and put it on the bed and that's been just about my whole day. I have no idea why but it wore me out.
Lunch and a pedicure with people I love more than life itself. So very, very exhausting.

It rained here this morning for about an hour and a half and it poured down. The kind of rain that pounds the earth. I drove by the FDG on my way home from town and although the building is going up, there is still standing water in the front south-west corner. My across-the-street neighbor called me and she, like me, had gotten massively discouraged in the last few weeks but she's back on it now. She's talking about getting a stop order on construction but I just don't think that's going to happen. I don't think that either the Dollar General company or Jefferson county gives a damn about putting a sewer system in muck in a community where many, many people have well water. So what? Who cares? Two batty women. We call people, they listen, they promise to check the situation out. They apparently never do.
And so it goes.

In a lighter and happier note, August had his kindergarten graduation today. It was held in the classroom, very small, and only parents and siblings were invited.
Here are some pictures. 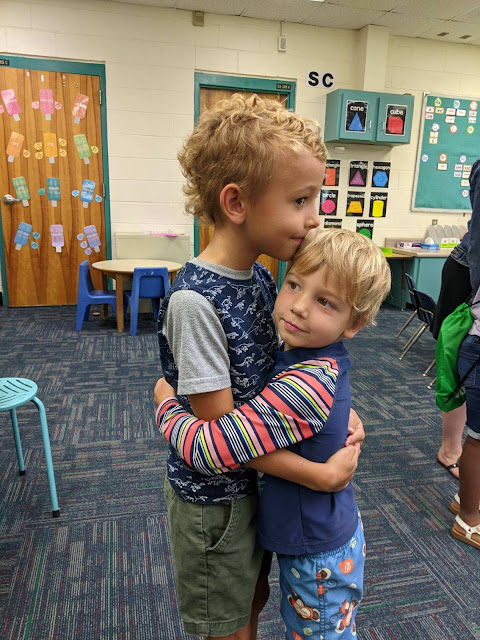 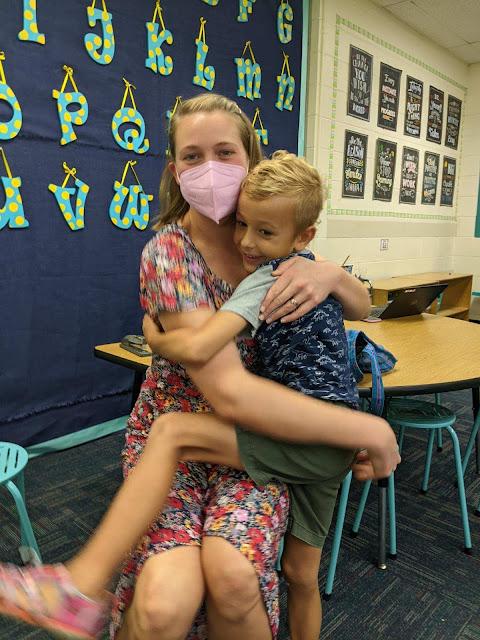 Jessie said it was very sweet. The kids did a little dance to a song from Toy Story and they all got awards.
A big day for our August. And his family, too.
Why do they have to grow up so fast?
Because they do, I suppose. And we just have to accept that.
I better go make our supper.
Love...Ms. Moon
Posted by Ms. Moon at 6:42 PM