The biggest news today is that one of Violet's eggs has hatched. At least one. I finally had to force myself to stop bothering the little hen. She is stressed out enough as it is. But on one of my checks, I heard a peeping and sure enough, one of the babies was just about through a tiny hole in the membrane of the egg. Did you know that you can hear them peep before they hatch? Oh! What joy! And I do know that it has entirely hatched now but I have got to leave them alone. I am not sure why I'm so fascinated by Violet's eggs hatching. I mean- they're not even really her babies. Well, of course they are because she will be their mama but not biologically. I'm glad that one of Darla's chicks is Violet's bio-babe. But honestly, I think I'm attached to Violet in a different way because she's been with us so long and because she's definitely an older mother. There's just something so impressive and inspiring about such a big and strong spirit living in such a tiny bird.
Hopefully, tomorrow I will be able to take pictures of some new fluffy peeps.

It's been a most beautiful day here in Lloyd. The high was only around 85 degrees which is a sight better than 95. That rain really cooled things off. I walked down to the post office this morning and then to FDG site and unfortunately, the rain did not wash everything away. 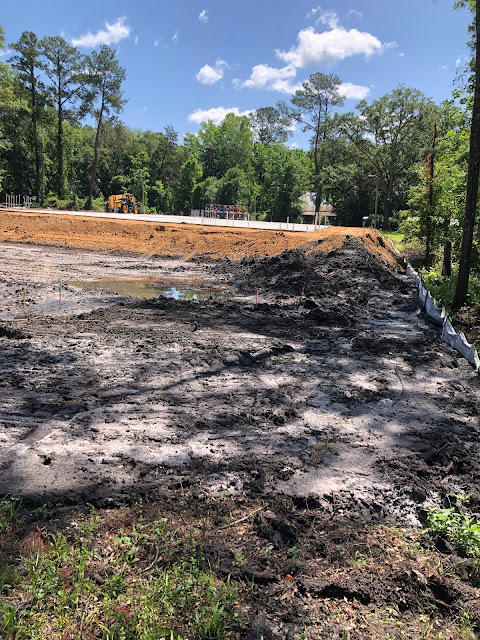 There is more standing water, however.
I have noticed that there is no building permit posted as of yet which I am pretty sure is some sort of violation. I will be calling Jefferson County Land Planning on Monday about that. Not that it will do a thing.
Again, I waited until today, a Saturday, to wash the sheets. When I have boy-duty, there just isn't enough time. I mean, there would be if I got up earlier on Friday but let's not get crazy here, okay? And today was a perfect day to hang bed linens and all the rest of the laundry on the line. I also did some garden weeding. Despite the lower temperatures, I sweated through my clothes. Ah! If only that "sweating out the toxins" thing was true. I would be so pure.
It's been good to have the man back. He's jumped right in and is working on dismantling the deck between the house and the old kitchen. I told him he needs his Levon to help him and he does. Levon is such a good helper. I've never met a four-year old so willing and able to do actual work. Like we all keep saying, if he had a job, he would be the happiest boy in the world.
From where I'm sitting I can see Darla scratching and throwing up dirt in the back yard and her three little puffballs following behind to eat what she digs up. She is certainly a diligent mother! She has been scratching so persistently that there are long spaces in the yard that look like they've actually been raked. When you think about it, a chicken foot is an excellent rake in shape, form, and function. I wonder if I will ever tire of watching my chickens as they go about their lives. Today one of the hens, Pecky, I think, was standing alone in the back yard under the magnolia tree just calling and calling and calling and calling- one of those situations that always makes me think of the time Lily was here and one of the hens was doing that and Lily said, "Mom, I think your chicken is broken."
Anyway, today while this girl was making all the noise, I suddenly heard Liberace sing out to her. Just a few notes. And I swear it sounded like he was saying, "Would you please be quiet? I'm right here."
And sure enough, she quit with the bawking.
The chickens add another layer of life (whoa! what a great unintended pun!) to this small piece of land where there's already so much going on. Their actions amuse and sometimes amaze me, entertain me and pique my curiosity. I admire them, I really do and I am so grateful that Kathleen brought me those first chicks and that bag of starter feed, knowing that I would probably never make the jump unless she pushed me.
I thought of Kathleen today as I knelt in the garden between rows of tomatoes, pulling weeds. My Lord, but she had a growing spirit! I'm not sure I ever met anyone in my life who was as intensely nurturing as she was despite the fact that she never had children. She nurtured her beloved dogs and cats and chickens and plants and all of her friends. And every single creature and creative endeavor and bit of flora that she put her hand to, was sure to grow in the light of her loving care.
Well. That's a good place to end on Mother's Day Eve.
Love...Ms. Moon
Posted by Ms. Moon at 6:06 PM