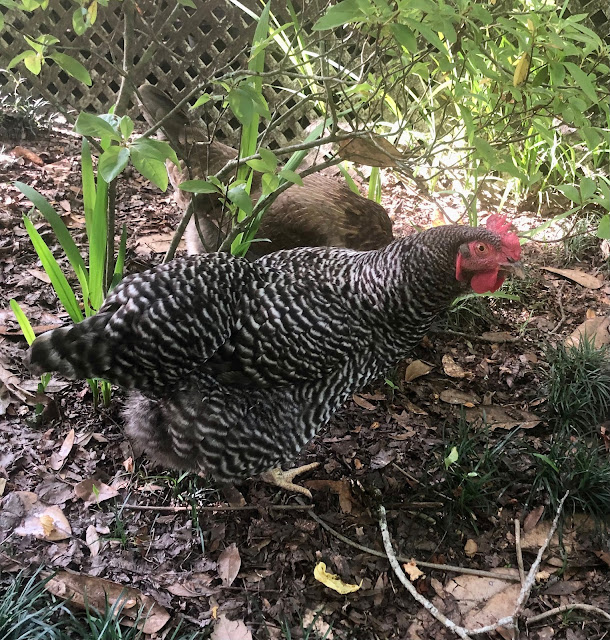 As you can see, Miss Annie is doing quite well. She is giving me a sort of wild side-eye in that picture but due to the placement of a chicken's eyes they always give us the side-eye and due to the fact that they are tiny dinosaurs, they generally have a wildish look to them so that is not an unusual way for her to observe me. I am sure that she is more than grateful that I have stopped taking her off the roost at night to bring her in the house and do strange things to her.

Perhaps I have learned my lesson about interfering with my chickens because I really have no idea what I'm doing. I did once heal up a hen's head wound, caused by the other chickens pecking her down to the bone, with golden seal and neosporin but that is the extent of what I am truly qualified to do and in that case, the problem was quite obvious, the remedy noninvasive.

I took a real walk today, or at least what I call a real walk which I'm sure some people would think of as a minor stroll. When I say "real walk" I mean three miles at least and that I did. I walked down to the county line and kept on going for awhile, came back the same way and then continued on down to the site of the FDG. I am not sure why I keep going back there. Perhaps merely to fuel my indignation. My neighbor called me again today and she, too, is fired up. She sent me the links to the Jefferson County Land Use Codes which of course I am not going to read entirely through. Do I look like the hero in a John Grisham novel? No. I do not. My neighbor's education, training, and experience provides her with a fine ability to do research which she loves doing. My education, training, and experience provide me with a fine ability to bitch about shit which I also love doing. Generally in a useless way.
Anyway, despite the fact that it has not rained in two weeks, the big pool of water on the property is only getting bigger as the water drains from the standing water just south of it. As my neighbor pointed out, there is a culvert which goes under the road a few feet away which would indicate that at least the road people knew that the land was apt to flood and needed some sort of method to drain the water when we get lots of rain.
Oh, it's just a damn mess. I'll shut up. For now. 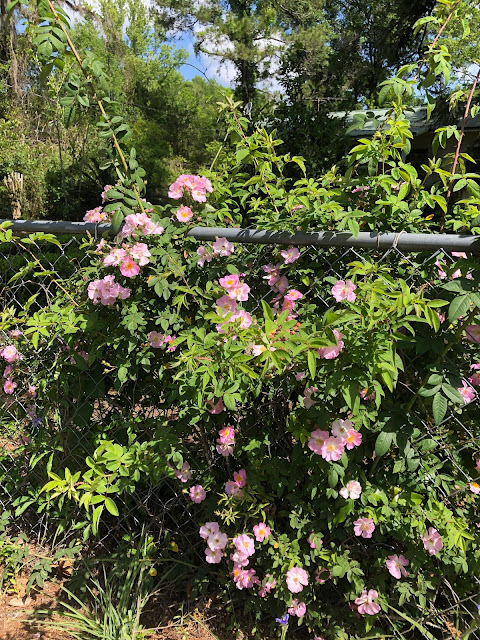 This is just a small portion of the roses growing on the fence of a house a few doors down and across the street. A man named Mr. Kinsey used to live there but he has since died. Still, his roses bloom. 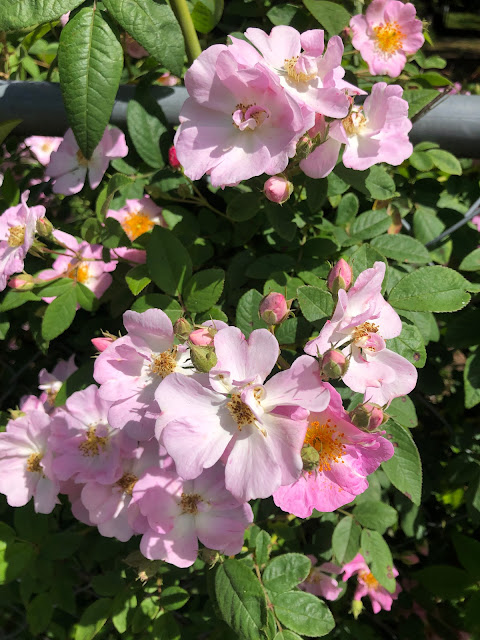 Aren't they just beautiful?
I remember when we first moved here and I was out in the front yard doing something, and he walked by on his way to Israel's store which is now and has been for quite a while, out of business. Mr. Kinsey stopped to talk to me, introduce himself. He told me his name and age, which I can't remember but I'm pretty sure it was up there somewhere in the eighties. He was quite proud of that fact and the fact that he still liked to go dancing. He also told me that my yard would look nice if I got some grass growing in it. Even at that stage of ownership here I knew that grass would never grow in that part of the yard due to the lack of sunshine. I told him that it would make more sense for me to just rake the yard's dirt every day like ladies in parts of Africa do, to make everything tidy and neat. I do not think he was impressed.
Eighteen years gone by since then. And yet, the roses still bloom.
And I still do not have grass in the front yard.
Here's another picture from my walk. 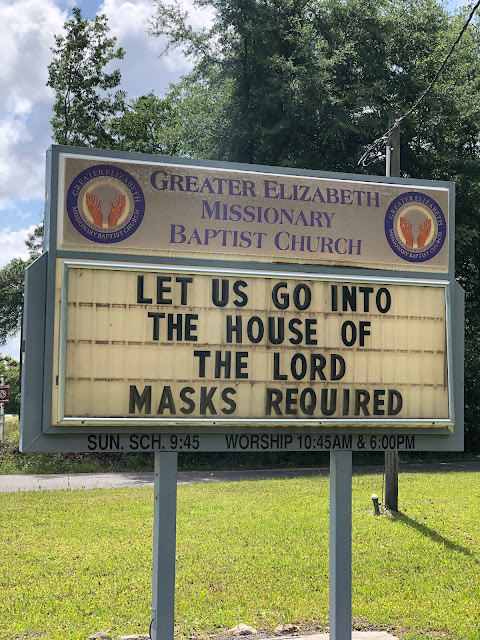 Now this one just cracks me up. I respect the fact that the church requires masks but somehow the contrast between the two expressed thoughts makes me giggle.
I spent at least an hour today looking for a new book to listen to. I had downloaded an extremely tacky but not badly written book that had some interesting aspects to it but after awhile, the sex just got to me and not in a good way so I returned it. I simply could not listen to another minute about the guy's "hair like silken flames" or the woman's throbbing...
You get it.
I finally selected "True Grit" to listen to. I have never read the book but recently listened to another of the author's novels, "The Dog of the South." Charles Portis. I think he may be rather underrated as a writer and so far I am enjoying "True Grit" although I know that I will visualize John Wayne as Rooster Cogburn and I'd rather not have that image in my head. I've never liked John Wayne as an actor and will do almost anything to avoid watching him play any role but of course, when the original movie came out everyone watched it, me included. After I listen to the book, I plan on watching the 2010 Coen Brothers' version which I have never seen.
Boy do I live an interesting life.

I'm pretty excited that D.J. Orange Intestine has been found in contempt for refusing to submit documents in an investigation concerning his finances. Let us all take a moment of silence to give thanks to New York Attorney General, Letitia James.
Also I see that Elon Musk has bought Twitter. This is beyond my ability to truly understand. I do not have Twitter and I do not exactly get the point of it but the fact that the world's richest person is going to be in control of something so huge scares me to death.

With every day that goes by in this crazy, insane world, I am more and more grateful that I have this tiny spot in Lloyd to hide in. And also, if you want to know the truth- that I will be dead before the world completely implodes.
I gotta go make supper.
Love...Ms. Moon
Posted by Ms. Moon at 6:48 PM