Friday In The Life 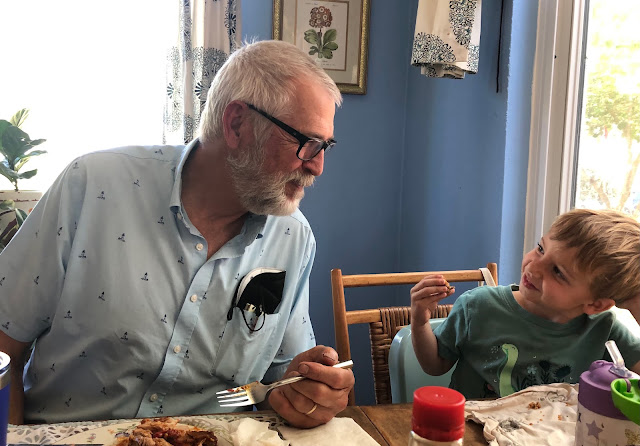 Today was a pick-up-boys-and-hang-out-with-them day and Mr. Moon decided to come with me, which was good because he now knows the routine of pick-ups and can take over when needed. We stopped on the way in to town at the library where I returned some books and we noticed that they have built a brand new playground, right beside our Eastside Branch. In fact, the fencing was still up around it when we went in the library and by the time we left, it had been taken down and there were already moms and kids playing. 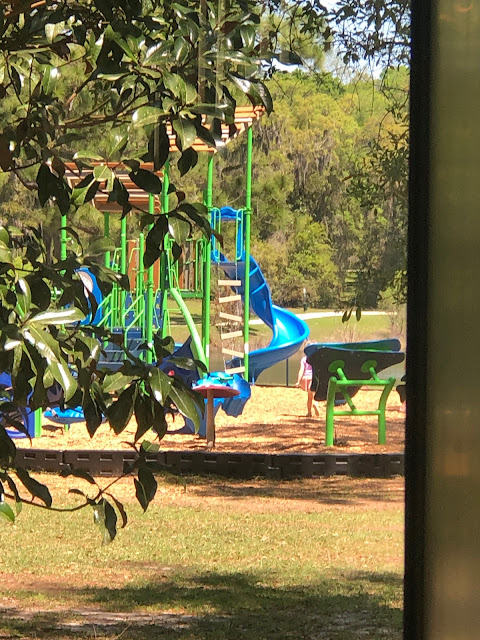 What a beautiful, brilliant thing! Now mothers and fathers and grandmothers and grandfathers can take their kids to go get books and then spend some time letting the children get their ya-ya's out on a playground. There's also a little pond/lake that's nice to walk around. If there'd been something like that when I was a young mother, it would have made me so happy.

Don't you love that picture of Boppy and Levon? I packed us some leftover lunches and Levon joined us at the table with a snack as we ate. Here's another picture of him. 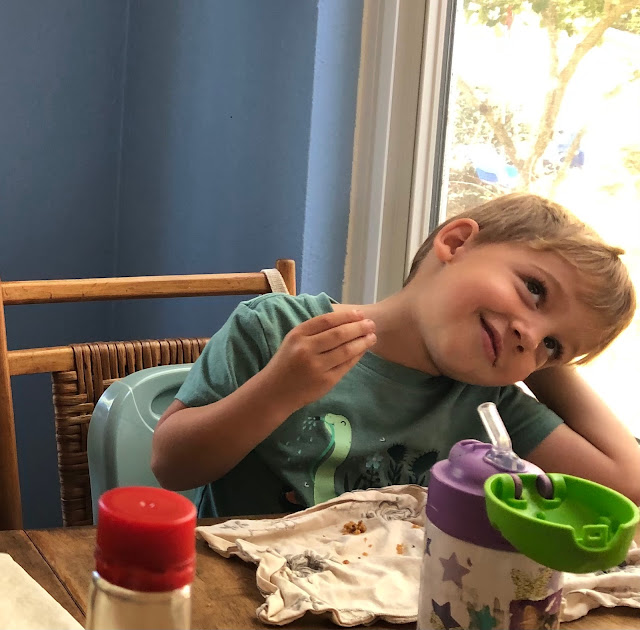 Those eyes! Those curved-up lips! Such a beautiful boy.
After he and Bop played some car games and I read him a book, we went to get his brudder at his school. August came out of the door, gave me a quick hug, spied his grandfather and raced to hug him.
Oh, how they love their Boppy.
It's okay. I love him too.
The best part of the afternoon, I think was when we were all outside, the boys casually jumping on the trampoline, and Mr. Moon relaxing on his back beside them as they gently jumped and me sitting next to them in a civilized chair, and everyone making up tall tales about what we'd done that involved mentos and diet cokes and also chickens.
As in-  these things were tied or bound to someone sleeping either on their arms or feet or backs so that they woke up fizzing around or flying into the air.
"One time, when you were sleeping, I tied giant bottles of Diet Coke to your back and then, when you were still asleep, I put mentos in it and it shot you up into the air so high that you landed in a tree and I had to use a ladder to get you down."
And so forth.
My story involved making pancakes with mentos in them and then putting diet coke in the syrup jar and when they poured the "syrup" onto the pancakes, the pancakes fizzed and exploded themselves into the air.
Perhaps you had to be there but trust me- we all laughed a lot. Super-gluing heads back on was involved.
Tomorrow Mr. Moon and Vergil are going to leave early, early and drive to New Orleans to see Duke play North Carolina in the basketball college playoffs. Vergil went to Duke and he came up with this crazy plan for them to go see the game.
I think it's a very fine plan. They are going to have a great time.
The game's tomorrow so they'll drive there, watch the game, spend the night, and come back on Sunday.
Happy Friday, y'all.
Love...Ms. Moon
Posted by Ms. Moon at 7:09 PM