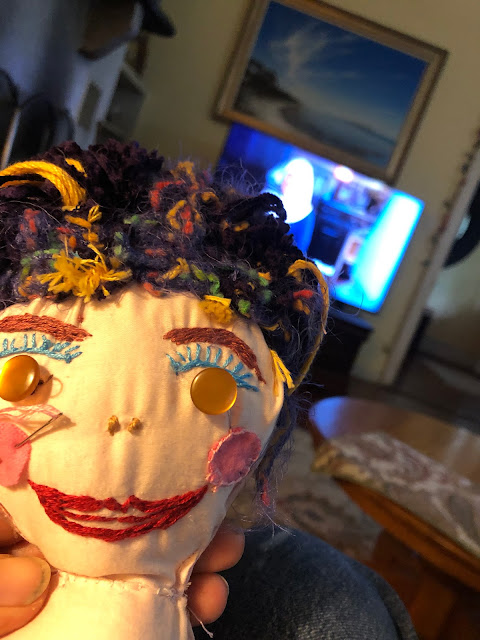 It's been a good day to stay in, sew on the dolly and watch Call The Midwife. Oh, those wacky nuns!
No, really, I love that show. Not only does it take me back to the days when I helped women give birth and the days when I gave birth myself, it's just a good show. I do love how as the seasons have progressed, the times that are portrayed have changed appropriately from just post WWII to where they are now in Season 10 which is the sixties. As you all may know, one of my very favorite things that ever happened on the show was when a young character wanted to go see a group called The Rolling Stones one night.
Ah me.
I think the overriding theme of the show has been and is love. Simply love. And the premise of a show that features Catholic nuns as some of the midwives is rather genius, in my opinion. Midwives not only deal with a woman's most private parts but also with the issues that surround birth from sex to relationships- two things that most nuns never experience and yet, they cannot shy away from discussing them, from having to deal with the issues surrounding them frankly and knowledgeably.
The show has covered cultural shifts and medical advancements. It has dealt with homosexuality, domestic violence, abortion, adoption, child abuse, racism, immigration, alcoholism, drug abuse, poverty, aging, death, incest, sex workers...
It goes on and on.
Some of the episodes over the years have affected me deeply and I will never forget them.
And as I said, there is always love there somewhere and there is always the representation of birth as usually a normal and natural act, often best managed at home with caring, supportive, and well-trained midwives.

Mr. Moon and Vergil made it safely to New Orleans in a very timely manner and have sent pictures of a delicious lunch involving gumbo. I am sure they are already at the Superdome. I saw the Rolling Stones there once but this was long before I was truly in love with them. It was one of their massive shows with a cherry picker and every sort of pyrotechnics and so on and so forth and I was with a man whom I was trying to convince myself I was in love with.
Thank god I did not.
A few years later I was in New Orleans with another guy, and he had a ticket to see the Super Bowl in the Superdome but he was so loathe to leave me for the time it took to watch the game that he didn't.
Sigh.
That was Mr. Moon. I did indeed fall in love with him which is the smartest, best thing I've ever done. We bonded like crazy on that trip and I will never forget it.
And now, when I think about the Superdome, I think of those things but I also think of the days and weeks following Katrina and the horrors that happened there when those who had been forced from their homes were sheltering in that space. I cannot imagine the suffering, the feelings of helplessness, the lack of any sort of comforts, the grieving for those lost in the hurricane, the stark fear for the lives of loved ones whose locations were unknown.
All of it.
But tonight will be a different story and although I do not pretend to understand the attraction of sports watching, I do understand that it is a very real thing and probably as old as humanity. We choose our knights and send them into battle wearing the colors that represent us. Gladiators.
As I have often said, I think that the sports gene, the religion gene, and the patriotism gene are probably all linked. It makes sense to me. And you either have it or you don't.
I don't. 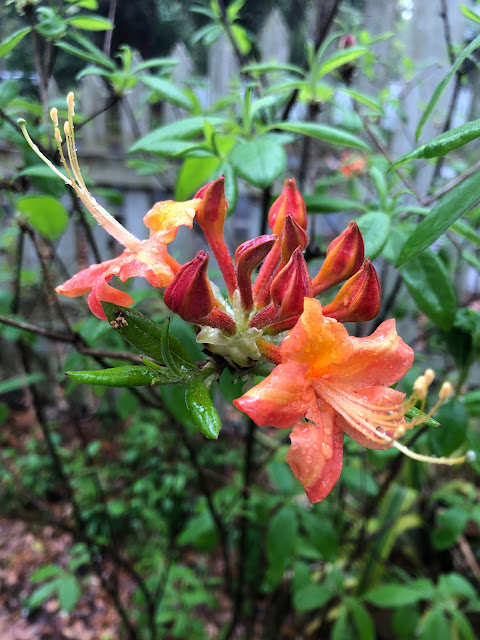 I remember my friend Kathleen and I going to a local annual native plant sale one early Saturday morning when I bought it. It has grown so very slowly but it is still here and this year it has more buds than I've ever seen on it. There used to be gorgeous one growing in the yard of an empty house on Main Street but a nearby church bought the property to use as an office space and cleared the lot and in doing so, extinguished that particular flame. I wonder if they even knew it was there. Probably not. But if they had, would they have cared enough to save it?
Who knows?
Not me.
Love...Ms. Moon
Posted by Ms. Moon at 6:33 PM