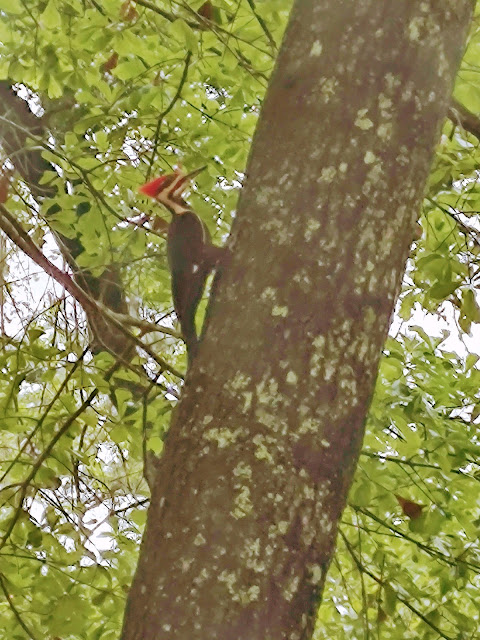 That is a very cool picture of a Pileated Woodpecker which Hank took today and sent around to the family in a text. The bird was in his yard which also attracts a good number of "regular" redheaded woodpeckers as well as other birds. On the Cornell Lab "All About Birds" page, the Pileated Woodpecker is described as "...one of the biggest, most striking birds on the continent." It's a fun page and I learned a lot from it. It's also got some cool pictures on it. It was a bit of nice synchronicity that Hank sent this picture today as yesterday, Wilma at South Englishtown Gazette posted about a woodpecker she sees around her place in Belize and I remarked in the comments that it looked to be related to our Pileated Woodpecker. Hers is a Lineated Woodpecker and yes, they do look very similar although our bird is a bit bigger than hers. The Pileated can be from 16-19 inches in length while the Lineated bird is from 12.4 inches to 14.2 inches, both of which are large birds no matter how you look at it.
People sometimes get the Pileated Woodpecker confused with the now-extinct Ivory Billed Woodpecker which was even larger than the Pileated. It is not absolutely proven that the Ivory Billed is entirely gone but there has not been a reliable sighting since 1986. Their extinction (if indeed it is) was due to "climate change, habitat loss, and collection," according to a PBS North Carolina article.
Yay, humans, right?
We are fucking great at using this planet as our toilet and bottomless source of not only what we need but what we might have any whimsical hankering for. Plus, we just do love to kill things. But hey- you know, God gave us dominion over all so it's cool.

Anyway, the beautiful Pileated variety is alive and well. I see them here in Lloyd sometimes. I love the way they fly, scooping air with their wings and releasing it. It's like swimming in the air.

It's raining again. And damn if I didn't get a tornado watch alert on my phone a few hours ago. This is crazy. We didn't get anything but a regular old moderate storm yesterday and same today. Thunder grumbled and complained like Rip Van Winkle's empty belly, the rain poured down, and now it's only a light patter, a sweet curtain of sound behind the evening bird song.

I've stayed home today, not feeling terrible, not feeling terrific. I ironed, and scrubbed toilets, washed clothes and worked on Dolly's head piece of Linda Sue's felted flowers. Just a normal day in the life of a sixty-seven year old woman in Lloyd, Florida. Tonight I hope to finish up the book I've been gulping. Bordain: The Definitive Oral Biography. I just want to have it done. It's making me so sad. I'm not sure that any of us are able yet to accept the fact of his death and how it occurred and yet at the same time, it seems that it was so inevitable. He told many people in the last bit of his life that this new romance he was having with Asia Argento was "going to end so badly."
Yeah. It did. I'm not blaming her, though. She just had a darkness to her that I think he craved and sought. He had not become a junkie for no reason whatsoever and his gift and his downfall was his constant search to fill up the addict's need.
At least, that's my take on it.

A frog is croaking in the little almost-pond in the camellia bed and that song is one of the many soundtracks my life has been set to. The rain, the thunder, the birds' songs and calls from hawk to finch to crow, the wind as it whispers and ssshes through the leaves in my yard- these are all as familiar to me as my own voice. They are the heartbeat of the dirt and land and sky where I live. They do, in fact, represent life itself.