Grazin' In The Grass, It's A Gas, Baby Can You Dig It?

As I wrote to a friend today, this has been the most Sunday-ish Saturday. It just has that feel of an irritating sadness, a yes-it's-beautiful-but-so-what? air about things.

Perhaps it all started last night when Jack and Maurice had a fight ON MY FACE in bed. Jack got to the bed first and was settled in without a care in the world until I suppose Maurice jumped up on the bed to claim what has become her usual spot which she certainly does not share with Jack and upon discovering each other's presence they hissed and clawed and toothed, waking me up and causing me to frantically try to bat them away from me, which I did, and one of them ended up on the bed and other one didn't and I'm not sure which was which because it was so dark and when I got up, neither one of them was there. I have a tiny Bindi in the middle of my forehead now and a small, shallow laceration on an eyebrow but I am quite aware it could have been so much worse.
You know, there are a lot of things I have never experienced in my life, some of them to my vast relief, and some to my vast regret, but having two cats fight on my face is not something I had ever even pondered happening in my wildest dreams.
Mr. Moon slept right through it. I told him about it this morning and he said, "Did I wake up? Really? That happened?" Yep. It happened. Two feet away from his sleeping self.
Notice to thieves and burglars: Do not even attempt to be stealthy if you enter our house at night. Just don't waste the effort.
I guess when you learn to sleep through a train virtually going through the house every night, you learn to sleep though almost anything.

So anyway, Mr. Moon was invited to a fish fry today and I, too, was invited but they know by now that I'm not showing up. I made a pasta salad for him to take but I don't think much of it got eaten. It had things in it like chard and kale and fresh peas from the garden and no one eats pasta salad for its health-giving benefits. Plus, I didn't use Good Seasons Italian dressing which I think is a requirement and don't get me wrong- I love the stuff but I made my own vinaigrette. I used two varieties of basil in it too which probably freaked out some taste buds.
Anyway, I tried.

I planted a row of zipper peas but since they are a year old, I have no idea if any of them will come up. Then, because I was feeling mean and ugly I decided to get started pulling some of this mess. 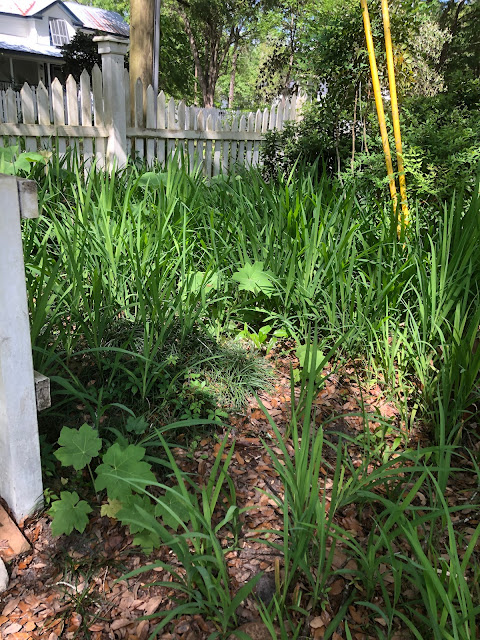 That's one small part of a corner in the front yard between the fence and the azaleas. There are at least four different types of invasive plants in there. Mostly what you can see are the crocosmia and the rice paper plants. I got down on my knees and hammered my trowel as deep under roots as I could get. The crocosmia grows from bulbs and I doubt I get a tenth of them when I dig them up. I think the rice paper plants may grow from roots which have been cursed with immortality and forget trying to get every bit of them up. But I suppose it was therapeutic in some way and I did enjoy it when the chickens showed up to scratch around. 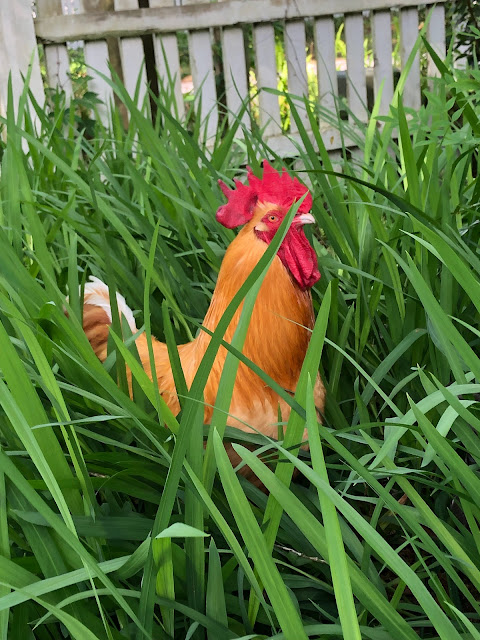 Liberace is so damn photogenic.
Here's a picture I got of Miss Pecky pecking the gnats off of her rooster. 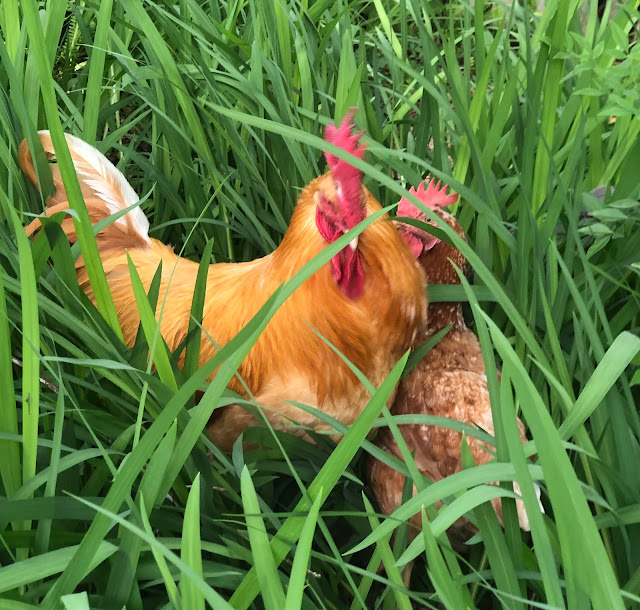 This is a service that a good sister-wife provides and it always looks like kissing to me.
I found a small creature clinging to a stalk of crocosmia and he/she (they?) were kind enough to hold still for me to take a picture. 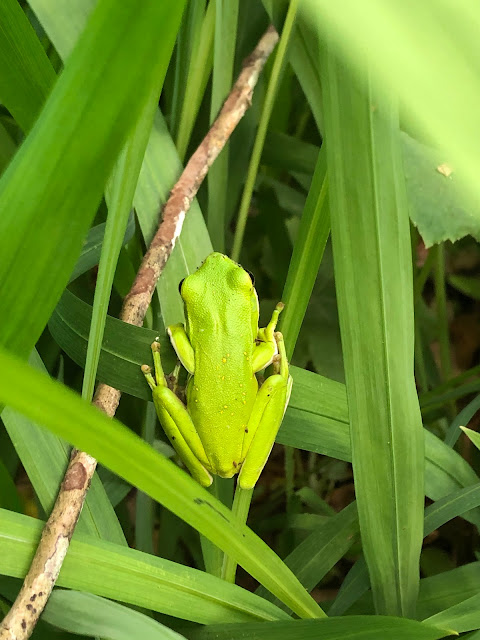 He-She-They were probably hunting for gnats too. Or mosquitoes. Plenty of those. This little one gave me pause- here I was, the great wildlife protector, devastating a habitat. I can only take comfort in the fact that crocosmia is the farthest thing there can be from a native plant species unless one lives in Africa.
Which I do not.
I read an article today in the New Yorker that gave me a great deal to think about. You can find it here.
It's concerning a movement to make natural resources like lakes and rivers and forests entities which can sue for their own protection. With the help of humans, of course. This is not exactly a new or completely outlandish idea. I think I had heard something about Ecuador and how its constitution has some similar ideas in it.

From the article:
When Ecuador’s new constitution was adopted, in 2008, it marked another, much more significant world first. The constitution’s preamble celebrates Pacha Mama, usually translated from Quechua as “Mother Earth,” and a later section enumerates the rights that Pacha Mama enjoys. These include “the right to integral respect for its existence” and “the right to be restored.” The constitution also includes a right to buen vivir, which translates into English as “good living,” but is itself a translation of the Quechua term sumak kawsay, which has far-reaching spiritual and political implications.
The effects of such a shift in thinking are almost beyond imagining. It could give environmentalists more and better tools to protect what we are so rapidly destroying. Is there time for such a change to be made to do any good?
Well. I don't know. The cynic in me says probably not.
The child who believes in magic in me says- why not try?

Here's how much invasive pulling I got done today. 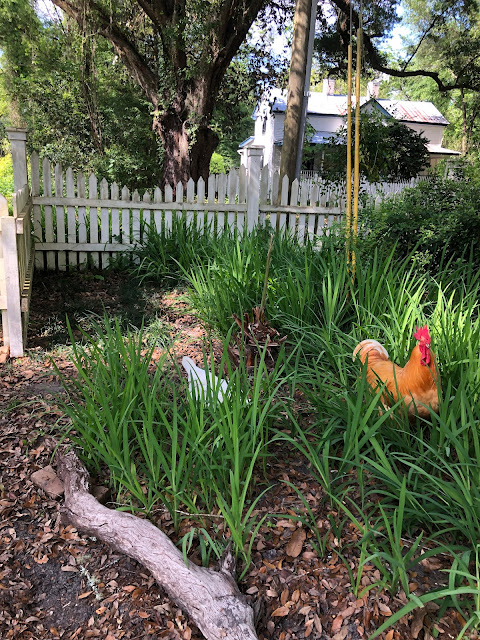 But the chickens appreciated the disturbed earth, and delighted in what they might find in it.
So there is that.
Gee. Tomorrow is the real Sunday. I can't wait.
Love...Ms. Moon
Posted by Ms. Moon at 6:41 PM