Not A Bad Day At All 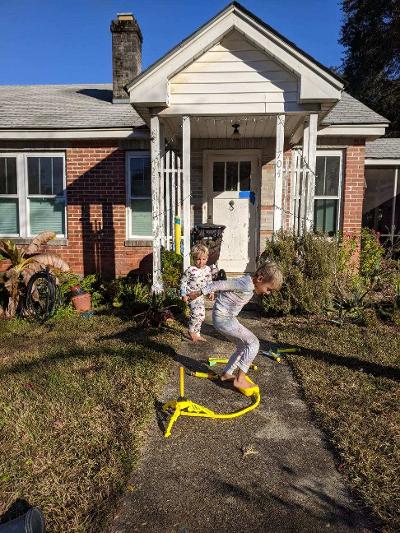 It has been a very exciting day here in Lloyd.
Okay. That's a lie. It wasn't really that exciting but it was nice.
First- the best news. August's cornea, according to the ophthalmologist, is almost entirely healed. Hurray for August's eyeball! The picture above is the device he used to shoot himself in the eye so I guess he was jumping on the launcher facing the other way when he did it. And although the rocket is indeed soft, that thing has a lot of force behind the launch. I hear that those rockets soar way into the sky!
Anyway, we are all relieved and happy that he is okay.

Last night Jessie and May and Lily and I got texts from Liz of the West who was looking for aprons to use as curtains in a kitchen window. The arbor that had been right outside the window is being taken down due to rot and the horribly invasive plant growing on it and she feels exposed to the outside world now. I have a pretty large collection of aprons, some of which hang on my kitchen walls, 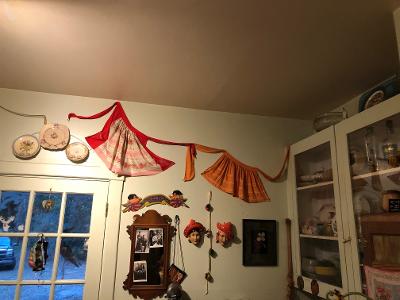 So Liz came out this afternoon and went through my collection and we sat on the porch and chatted for a little while and it was so lovely. I am not a social person, as we all know, but it was truly wonderful to just hang out and talk to a friend. As she said- a small bit of normalcy.
So that was delicious.

Mr. Moon had a very frustrating morning trying to talk to someone at Century Link which is the company that provides us with a landline and our internet. Living in Lloyd means that you really do not have much choice when it comes to internet providers. We're lucky to have any. But he'd neglected to pay last month's bill and they wanted to charge him a late fee of almost 25% of what the bill was and he wasn't having it. He'd thought he'd paid the bill but it would appear that no, he did not. So he sat in the kitchen and every time I'd come in to get coffee or make my breakfast cheese toast with tomatoes, he'd be very, very patiently talking to someone on his phone, never losing his temper, always being polite, but damn! You should have seen his hair! He had raked it back in frustration so much that he looked wild.
This went on forever. He finally got the whole bill thing taken care of (with the fee waived, of course, because there was no way he was paying that) and was supposedly put on hold to discuss a technical matter with a different department when he got cut off.
You can only imagine.
When I left the house to walk to the post office, he was trying to get ahold of another real person to talk to and I felt terrible for him.
When I walked into the PO, the post mistress was talking on the phone which is sort of a big customer service no-no if you ask me as I was waiting for her to retrieve a package I'd gotten and here's the thing- the subject she was discussing with her friend on the phone was POOR CUSTOMER SERVICE that she'd gotten from someone on the phone representing some store.
"Instead of saying, 'Yes m'am' or anything like that, she just kept saying, 'Yup!' And I was like 'Yup! What does that mean?'"
Good GOD.
She finally hung up and got me my package and I walked on home to find Mr. Moon on a break from phone calls as he'd been HUNG UP ON AGAIN!
What a strange world we live in now.

After Liz left here I decided to go out and try to dig up a plant I have in the little garden area by the kitchen but I got sidetracked and pruned back another rose growing there first. Then I started digging this stupid plant up (and I have no idea what it is or why it's there) but the roots were too big for me and I finally just shoved the shovel into the dirt and decided to cut down the dead bananas instead. They were looking like this. 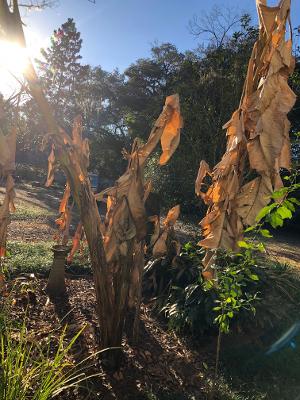 The way I trim back my bananas is to get a big ol' honking knife that lives in a drawer in the kitchen that I use for no other purpose and slice through the stems. Bananas are mostly a large sponge and are filled with water. Their insides are rather beautiful. 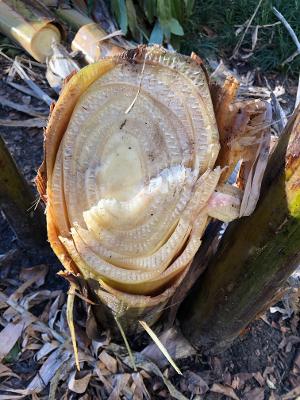 They are fairly easy to cut through but the larger ones are heavy as hell with all of that water in them. I cut the biggest ones up and put the pieces in my beloved little garden cart and hauled them over beside the garage where I dumped them. And now it looks like this. 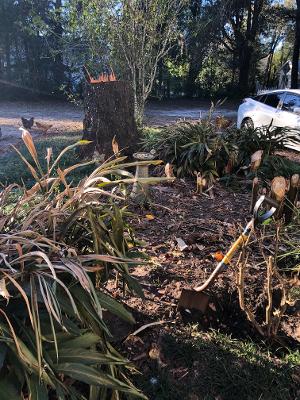 I am not sure what all of those other plants are but I think they may actually be turmeric. I should figure that out. I need to dig up a bunch of those if I want to plant herbs this spring. Or anything, really. Between them and the pine cone lilies, there's nothing but my chickens scratching for the compost I throw out there to stop them from taking over the whole space.

Florida is not a state where plants or insects or invasive reptiles know their place. It is a state where every noxious and/or ordinarily well-behaved species and variety takes their bras and shoes off and dances in the sun and performs fertility rites under the moon.

Oh well. Dealing with all of it keeps me out of the pool halls.