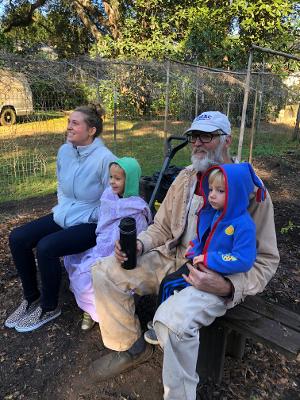 I do not even know what time the tree guys got here this morning. I was still asleep. And by the time I made it outside, this was happening.

It was chilly this morning. Wasn't supposed to freeze last night but when I turned on the water in my bathroom, I could just feel that the thermometer had dipped below 32 and it had. This did not deter the folks in the front row of the tree cutting show however. And I made hot chocolate for the boys and Boppy had his coffee and Jessie made a cup of tea and we were all thrilled to watch the beautiful operation going on in the yard. 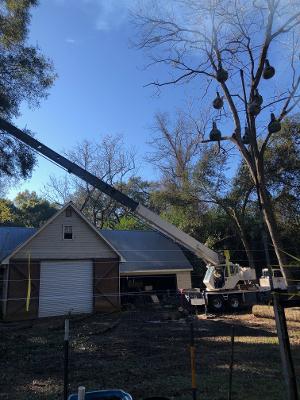 There was the guy in the crane who directed the cable that the actual tree-cutter hung from. 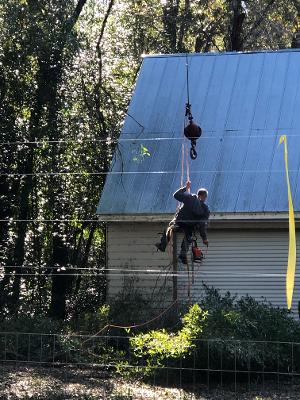 Here he was, coming down. He was a master of his craft and craft it is, performing ballet dangling from a wire with a chainsaw in his hand. The crane operator has to concentrate fully on his man and this one certainly did.
"One of the best in the business," said our Tree Guy later.
So there were the two of them and the son of the Tree Guy whose job it mostly was to cut and move branches. They had a small front-end loader or something, I don't know what it was, that was like an extension of the operator's arms which enfolded the branches and logs and lifted them up and transported them to where they needed to go, compacting them as well. They had a dump truck that got filled with limbs and pieces of log as the day went on.
It was an amazing and well-oiled operation and they never stopped except to take a short lunch break. You may notice that there are no helmets or safety glasses in sight. As Jessie said, "Safety is not their first priority." I had to giggle when she later got the boys' bikes out of the back of her van and made sure they were wearing their helmets before they rode around my back yard.
They were such nice men, these tree cutting men. The father (who I think is about sixty-four years old) complimented his son several times for doing something well and his son is a grown man, for sure, who also has his captain's license and does charter fishing trips. He told us that he's been doing cutting since he could crank a chainsaw and his dad has been doing it since he was fourteen. He learned the craft from his uncle.
I used to have a friend who referred to "the changers of the oil and the tillers of the soil" and I have never forgotten that poetic description of the people who work with their hands and their bodies, often with as much grace and artistic technique as a human being can display. Where would we be without those changers of the oil, the tillers of the soil, the plumbers and carpenters, the tilers and the gardeners, the road workers, the mechanics, those who build and those who take down what had been built before? The roofers and the linemen, the electricians and the shrimpers, the ones who deal with our trash, our septic systems, our routers and who repair our refrigerators and stoves, our dishwashers and washing machines? Who clean our hospital hallways and stock our grocery stores?
Let me just say that in the grand scheme of things, one good plumber does more to justify his existence on this earth than ten million Kardashian influencers or whatever the fuck they are.
When the daddy cut down the cherry laurel he chainsawed it and he landed it exactly where he wanted it to go. We applauded. We were an appreciative audience. 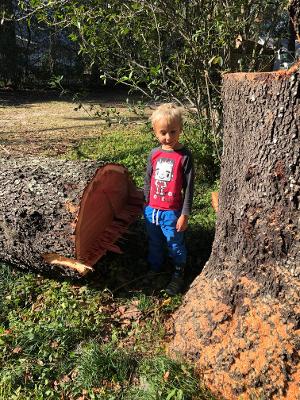 Such gorgeous cherry wood, although there was a lot of rot near the top. You don't realize how big a tree is until it hits the ground and you can feel the shake of the earth as it falls, until a five-year old stands next to it.
August walked down to the post office with me. I knew that his flannel was going to be in and I wanted to get it and show it to him. We had a nice walk and he demonstrated skipping and trotting and we chatted as we went. He asked me, "If you saw me, would you think that I am older than five years old?"
I found this a most interesting question and wasn't sure how to answer it. I knew he wanted me to say that I would have thought he was much older than five but in truth, he looks five to me. So what I said was, "Well, that's hard to say because I know you are five so to me, you look like you're five."
I'm not sure he was thrilled with that but he accepted it.
Besides the flannel, I also found a sweet card and a quilled snowflake sent by Susan M. I was so pleased to get those things. I came home and hung the snowflake up immediately and it will stay there, year 'round. 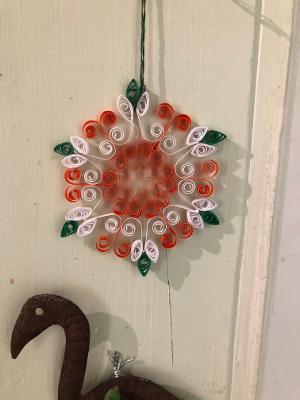 Isn't it lovely? Thank you, Susan. So much.
While the tree men had their lunch, we had ours, and the boys got to watch a little TV. They were thrilled, of course, but when it came time to shut it off, they didn't fuss too much and went back outside to see what was happening there.
The men will be back tomorrow to finish cleaning up the rest of the branches and logs. We'll be saving some of the black walnut and the cherry for various wood projects.
And all I day as this has gone on, I've had such a sadness inside me. I don't know what that's been about unless it's just the sadness caused by the anniversary of dear John Lennon's death which is not only the anniversary of the beginning of my first marriage, but what turned out to be the end, as well. Whatever the cause, I've had tears close to flowing all day and sometimes they have.
And that's just the way it goes, sometimes.
No use to fight it. No need to either, really.
We are humans and the rainbow of emotions we feel makes up the whole of the glorious palette of it all whether we are viewing it through prisms of sunlit water or a plume of smoke. 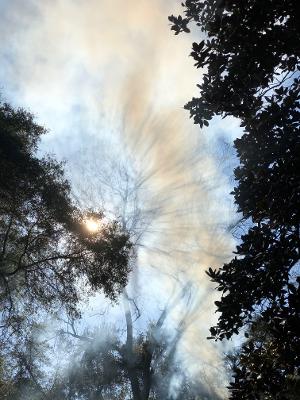