Keep Your Eye Off The Rocket 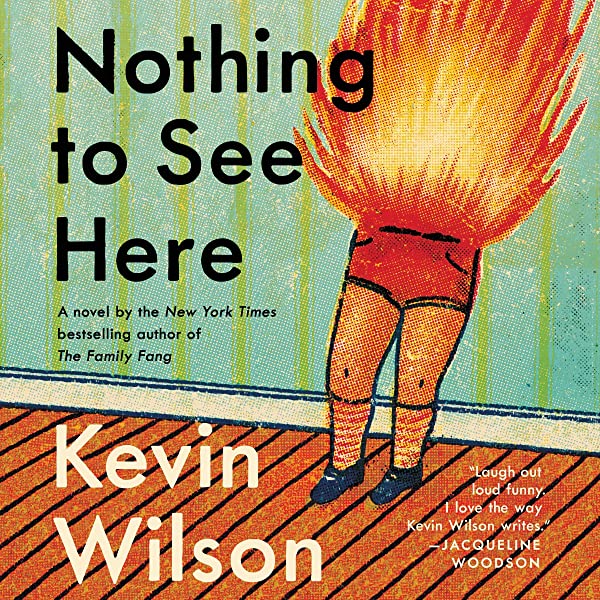 I checked my photos to see if I'd taken any pictures today and I had but it was just one and it was of Jack sitting on a chair. I sent it in a text to the kids about how I caught him trying to scoop an egg out of the wooden bowl it was in on the counter in order to push it onto the floor to play with. When I gave him toys to play with and he discovered that he likes to play, I had no idea I was creating a monster.
Rachel texted that his inner kitten just wanted to play and I answered by saying that if he starts breaking eggs on the floor, his inner kitten's ass is going to get whipped.
Yeah, yeah.

So I'm reading (with my ears) the book whose cover you see above and I'm enjoying it and I also thought the title would probably be appropriate for tonight's post so there's your picture. The narrator is tremendous and I have fallen in love with her. Well, I guess I've fallen in love with the character she is portraying but also with her voice. The storyline involves a protagonist whose best (and only) friend asks her to come and be a nanny for her two step-children who have the unfortunate habit of bursting into flames spontaneously.
They spend a lot of time in the pool, as one might imagine.
The premise sounds a bit iffy but somehow it's working very, very well.

In other entertainment news, we watched a movie on Netflix, The Midnight Sky, with George Clooney. We kept expecting...something. And smallish and mediumish things happened as the movie plodded along but then it was over and we sat there and went, "Well. Okay."

"Hand me the remote," said my husband.

Jessie just called. August shot himself in the eye with a rocket a little while ago and Jessie's trying to decide whether to take him in to the ER and she probably will. She says it looks a little funky and it hurts him and his vision is blurry. Jesus. She said, "I forgot to tell him to watch out for his eye!" so of course it's her fault. As I always say, no matter what happens, it's the mama's fault because we gave birth to them and if we hadn't, nothing would have ever happened to them. Now there's a pro-choice argument you never hear.
I told her I had no idea what to do because none of my kids ever shot themselves in the eye with a rocket (and it's a very soft rocket with a rounded end but still...). I told her I did remember taking a friend to the ER who'd done something to her eye and they treated it somehow but I couldn't remember what the problem was or what they did and then I said, "So that doesn't help AT ALL." I always erred on the side of caution about taking kids to the doctor but I can't tell you how many times I realized after interminable waits to see someone that either there had been no real cause for concern or else whatever the doctor had done seemed to have little effect. But of course, one can't base any decisions of this sort on that thinking.
Poor August. Bless his little rocket-launching heart. And poor Jessie. I hope their adventure turns out to be easy and that there's actually someone there who knows what they're looking at when they peer into my grandson's beautiful, perfect eye.

It did indeed get cold last night. Down to 25 I think. When I got up, Mr. Moon announced that we were down to 9% in the propane tank so he wasn't turning up the heat and had just put on more thermal underwear. He'd already arranged to have the gas guy come fill up the tank on Monday. I, however, did not like this plan and demanded in my pre-coffee state that he "CALL THEM!" and he said, "But it's a holiday," and I said, "No, it's not. Christmas is over and the post office is open."
So he called them and they came out and now we have a full tank and will not freeze when it gets down to 27 tonight.
Crisis averted.

Quite frankly, I've been in a very cheerful mood today and my stomach has not hurt. I am not surprised in the least. Christmas is over and the darkness has dispelled in my heart. For a day at least. I felt a little guilty when my children mostly reported feeling the let-down of it being the day after Christmas and also feeling the effects of eating so many Christmas treats and so much unaccustomed rich food but I didn't feel very guilty and although I did sympathize, I mostly just enjoyed feeling better than I've felt in weeks.

My husband and I have been jokey and loving and so it's been a fine, sweet day. I even cleaned out the hen house and pitchforked the big pile of poopy hay that has been collecting over the months, turning it and compacting it into a smaller pile. I felt like Farmer Mary.

Time to go make supper. I'm roasting some sea bass and making the grits that take an hour to cook because they are real grits and not the kind that are called "quick" or - horrors!- "instant". Those are not real grits although I will admit that I do cook the quick ones sometimes for breakfast if we're in a hurry. Needs must, as they say.

Jessie said she'll keep us posted about August and I'll let y'all know how it goes tomorrow.