I Guess It's Sunday 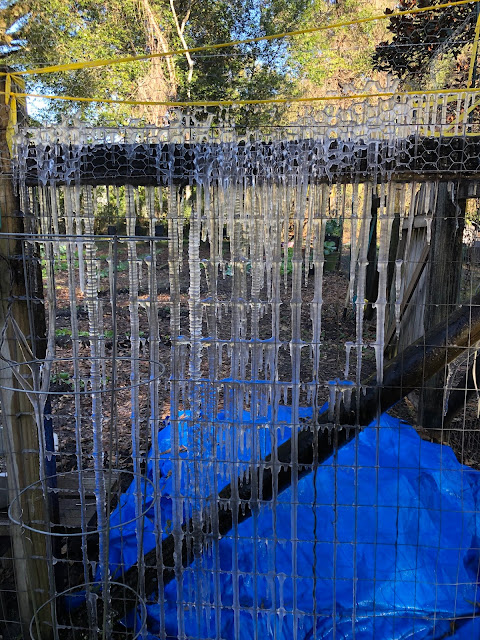 This is what the garden fence looked like this morning where we'd left the sprinklers dripping all night to prevent the pipes from bursting. Real ice sickles! And that part at the top of the fence was so interesting. Look at this. 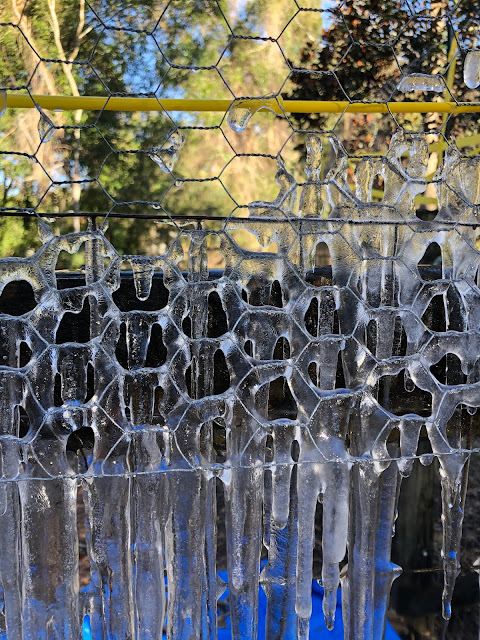 Ice sickle sculpture! But it all melted away by noon as did the ice on the chicken waterers. We worried the tiniest bit last night, putting the chickens to bed and knowing how cold it was going to be but they all survived nicely and gave us nine eggs today so they must be doing okay. They spent their day doing their regular roaming of the yard. They have specific places they visit daily and it seems to me that there's a schedule to it. They do tend to congregate around the kitchen until I bring out the compost for them to eat and scratch about and after that they go to different spots to scratch and hunt for bugs and whatever else it is they're looking for and places where they lay in the soft dirt they've scratched up for their dirt baths and sun naps. They seem to stay in a fairly small area of the yard although a few days last week I did catch some of them in front of the fence over near where I cleared the poison ivy which is way too close to the road for my comfort.
"Get on back in the yard," I told them and they did.
Before I ever had chickens I remember our then next-door neighbor, Scott, got chickens and let them run in the yard.
"Aren't you afraid they'll go out into the road and get run over?" I asked him.
"Ms. Mary," he said, "Have you ever seen a dead chicken in the road?"
I had to admit that no, I had not. I've seen countless armadillos, possums, raccoons, birds, a fox or two, and even deer but never a dead chicken.
Here's a good joke:
Why did the chicken cross the road?
To show the armadillo it can be done.
Haha.
I have no doubt related both this story and the joke before but y'all- it's been a slow news day here in Lloyd.
I think that breakfast was pretty much the highlight of the day but of course we haven't had supper yet so...
I finished listening to Nothing To See Here and it was truly a charming book. I sort of can't believe that a man wrote it. If you get a chance, please listen to the audio version. As I said yesterday, the narrator is fantastic. I listen to a lot of audio books. A LOT. And the lady who did this narration (Marin Ireland) is absolutely one of the finest narrators I've ever heard. Plus, it's a charming, heartwarming story and has a lot to say about children with differences in a sort of allegorical or metaphorical way. Maybe both. I ain't no grammar teacher.
Bottom line- highly recommend.
August seems to be fine after shooting his eye with a foam rocket. FOAM, people! He'll be going to see the pediatric ophthalmologist tomorrow. He even told Jessie that going to the hospital was sort of fun although that's probably because he got to watch Shaun the Sheep on Mama's phone while they were waiting. We are big fans of Shaun around here. It's one of those shows that kids love and yet, doesn't make adults want to puke.
As many of you related, having children just absolutely means that you will be spending time in emergency rooms. I remember my youngest brothers having to go to the ER after they got into our other brother's model glue. They had it all over their faces and in their mouths (they were quite young, a year apart in age, and absolute partners in toddler crime) and so my mother rushed them to the hospital where they puked up the bananas they'd recently eaten. Neither one of them ended up as glue-heads, thank goodness.
We started watching Bridgerton last night which is a very, very pretty show but we haven't gotten to any of the parts with nudity yet and until we do, I'm pretty sure that my husband will be fairly bored. I absolutely love the fact that so many racially different people are cast in all of the roles with no mention made of the fact in the scripts. From watching the trailer, I had thought that perhaps race was a theme in the show- you know- Whoa! Black man, very, very white romantic interest, Black queen, etc. But nope, just gorgeous people of various skin tones and ethnicities going about the ridiculous lives of the upper class and royalty. I hope that tonight's episode will give us at least a bare breast or two to keep my husband's interest.
And let's face it- who doesn't love a lovely breast?
I guess that's about it. I've made soup. Dough for focaccia is rising. A bowl of soup, a wedge of bread, a bit of goat cheese- perfection. The soup is a sort of minestrone, I guess. It has a lot of vegetables in it including tomatoes.
Tomorrow is Monday, right? I absolutely have to get back to walking. And perhaps also, eating all healthy and shit. I mean- we eat very, very well with fresh vegetables and wild meat and so on and so forth but the sugar and fat consumption has to come to an end. I finished up the last of the cinnamon rolls that Jessie brought over on Christmas day that she'd made and I felt like a junky wanting to call her supplier. I almost texted her to say, "Uh, could you please make more of those rolls? We need them badly."
And of course we do not.
No one NEEDS cinnamon rolls.
With icing.
Or otherwise.
Love...Ms. Moon
Posted by Ms. Moon at 6:13 PM