I have no pictures today. I have read or watched nothing inspiring, heart-lifting, or profound. I did read a story in the New Yorker that made my stomach hurt and there was one line in it which I will probably remember for a long time.  I would copy the line here but without context it is meaningless and so there is no point. But it's a damn good line.

It's been drizzling all day long. My weather widget got oddly specific this morning. 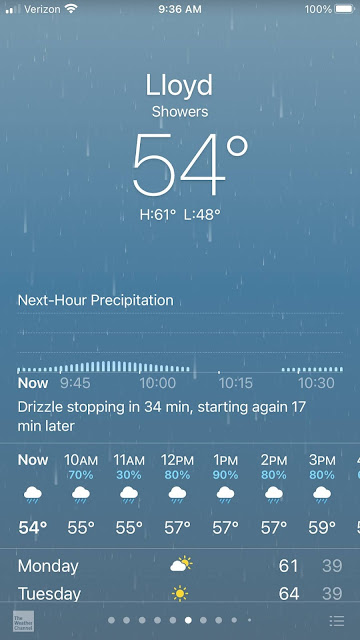 Okay. I guess I did have a picture. Anyway, I've never seen anything like that before. It's supposed to freeze on Christmas Day and it may also rain. I suppose that means that there is the slightest chance for snow. I seriously doubt that will happen.
I scrubbed the toilets today. Do you suppose that Donald J. Trump even realizes that toilets need scrubbing? I think he probably assumes that either
a. Toilets are magical and thus, never need to be cleaned, or
b. His bodily issues are magical, and thus, have no need of being cleaned from any surface they may come in contact with.
That was disgusting. Forgive me. Let's face it- I'm an old woman who has scrubbed a lot of toilets and I have little regard for those who have never had to face that reality.
I sort of started August's quilt. Perhaps by his birthday in September it will be done. Christmas is out of the question. Rumplestiltskin couldn't finish this quilt by Christmas. Isn't it odd how so many cultures seem to have the selling-your-soul-to-a-devil myth? Well, there are variations, of course. Rumplestiltskin asked for a firstborn child. The devil asked for Robert Johnson's soul. Delilah asked for Samson's hair. I am sure there are other stories. It's a good theme and one we should all ponder from time to time just in case we're in a situation where an ugly (or beautiful and undeniably hot) creature shoves a piece of paper and a pen in our hands and promises to solve our greatest problem or bestow many gifts on us if we just sign on the dotted line.
I had a small breakdown just a little while ago. I was trying to find something in my freezer under packages of various meat products which kept slipping and sliding even and unto the underneath part of the freezer drawer which meant that the freezer drawer had to be removed in order to retrieve them. Mr. Moon came to my rescue but I, being an old woman (is this our theme for today?) had already smashed the back of my hand on a part of the drawer which caused blood to break through the thin-and-getting-thinner skin there which didn't really hurt but it did really set me off.
I think I said something like, "That's it! I've hit my limit on meat products! I can't take any more of this!"
There may have been more words but mostly to that effect and none of them truly obscene which is a small miracle.
If I had been twenty-six instead of sixty-six, I would not have bled due to thin skin but I probably would have thrown packages of frozen meat products at the wall while screaming epithets. I have matured, however, since then. I have attained a level of dignity. Just ask my husband who took all of the packages out of my freezer and moved them to a different freezer. One of HIS freezers, out in the garage.
I feel better now.
Phew.
I would at some point like to talk about the moral dilemma I'm having reading Dr. Doolittle to August but who needs that on a Sunday night?
No one. That's who.
It's drizzling. I'm grizzling. Supper needs making. It's been a Sunday and I will tell you that some of it has been very, very sweet.
Who could ask for more?
Not me, baby. Not me.
Love...Ms. Moon
Posted by Ms. Moon at 6:28 PM