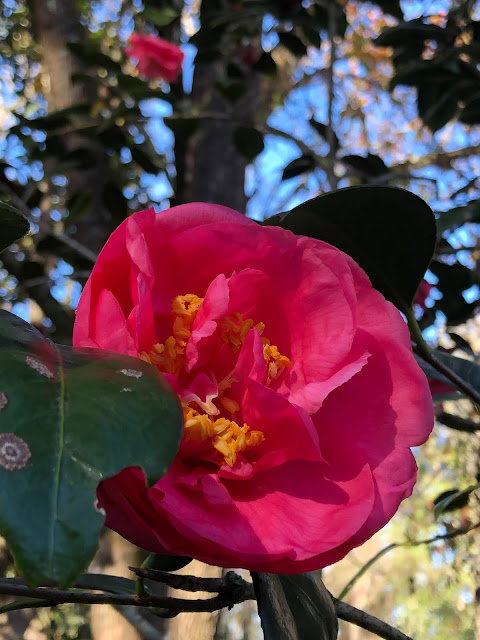 Why didn't I remove that not-so lovely leaf in the front of the camellia before I took the picture? Because I didn't even notice it. That's why. I am very much NOT a visual person and I think that may have to do with the fact that I needed glasses far earlier than my nearsightedness was detected. I'm not blaming anyone because I was only in third grade when the Lion's Club visited the classrooms at my tiny school and had us all point in the direction that each "E" was facing.
"What E?" I asked.
Ooh boy.
At which point I became not only the fat kid whose mother was our teacher but also the kid who wore glasses.
Good times.

Here's how blue the sky was today. 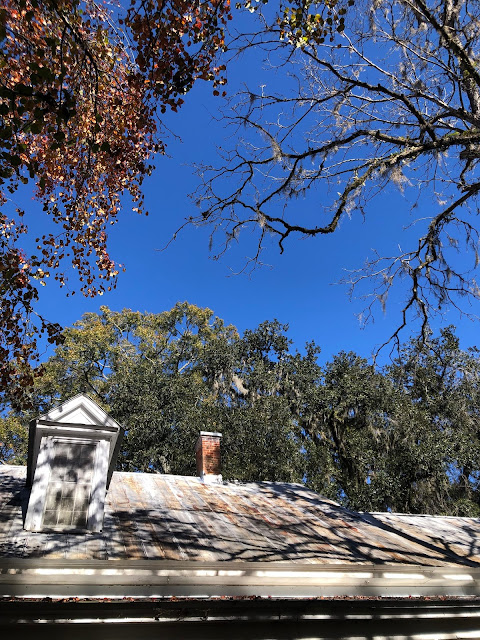 Pretty darn blue. Blue as a Siamese kitten's eyes. Blue as the sea in Cozumel. Blue as...
You get the picture.
Literally.
Lily brought the kids over today for a pancake lunch. We've been planning this for about five days but between Lily's brief (not covid) illness, the weather, and me having to go to town yesterday, it didn't happen until today. I made the traditional sweet potato, apple, banana, oat bran pancakes and put the butter, maple syrup, tart cherry syrup, and blackberry syrup (thank you, Lis!) on the table outside. 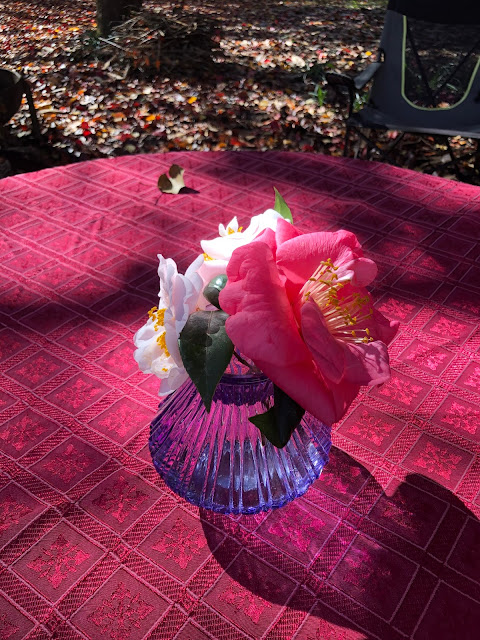 The chickens knew that food was about to happen. 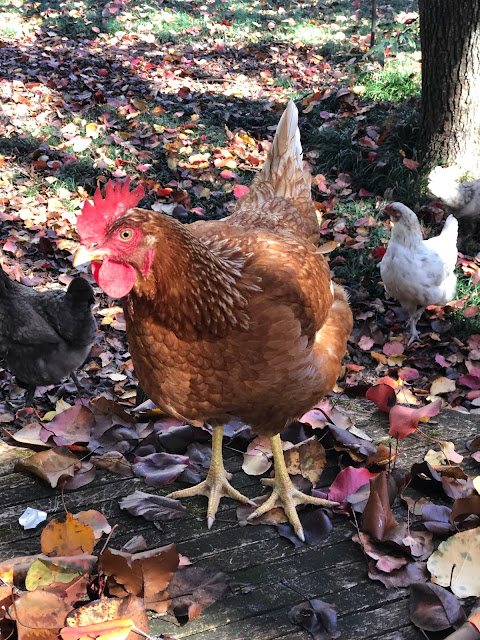 Miss Pecky is a bold, bold bird.
And when the kids got here they flocked right up, begging for treats. Poor Gibson. He's been traumatized. 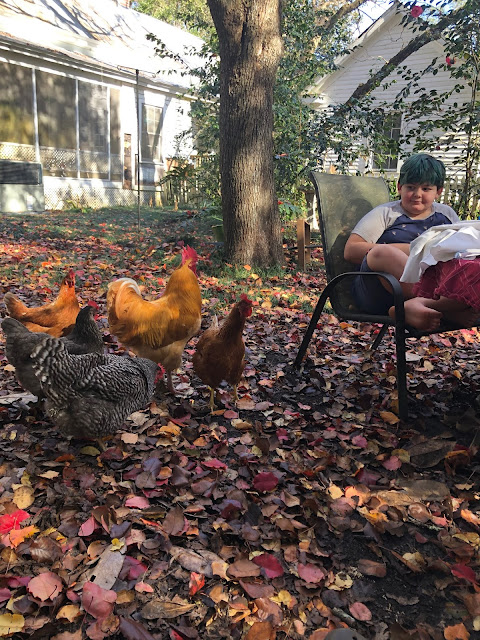 Magnolia June found the new baby stroller right away and soon she was taking care of a baby. 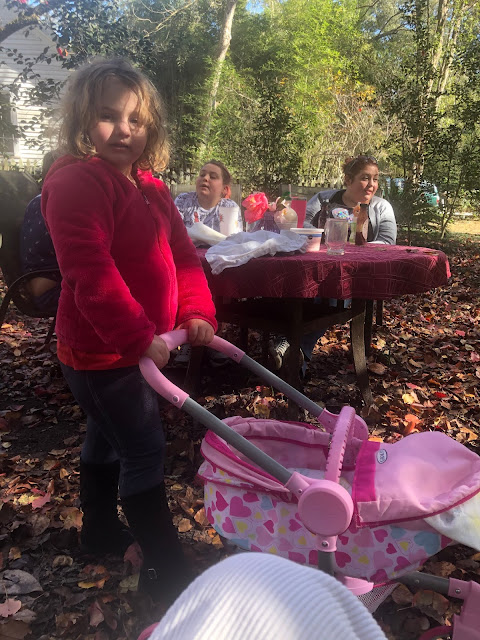 Not a great picture but I'm lucky I got it. When I asked the girl to pose she said, "I don't have much time," and off she went.
It was so good to see my Lily and her bebes. I wanted to sit around and chat all afternoon but they couldn't stay that long. Cookies to be baked! Christmas crafty gifts to be made! I don't think I've ever seen Lily so cheerful and energetic. Her happiness makes me so happy. I got to talk with just Owen right before they left. I miss that child so much. He's growing up so fast. They all are but, damn. I talk to him like he's an adult. Okay, I don't curse around him. He's only eleven. Otherwise, I respect his intelligence immensely and our conversations reflect that. I'm sure he humors me a bit. I am his old Mer and he is thoughtful and polite. I feel so lucky to be his grandmother.
After they left I cleaned up and brought the vase of camellias to the back porch and later found Maurice posing beside them. She reminded me of the old Glamor Shots. Remember them? 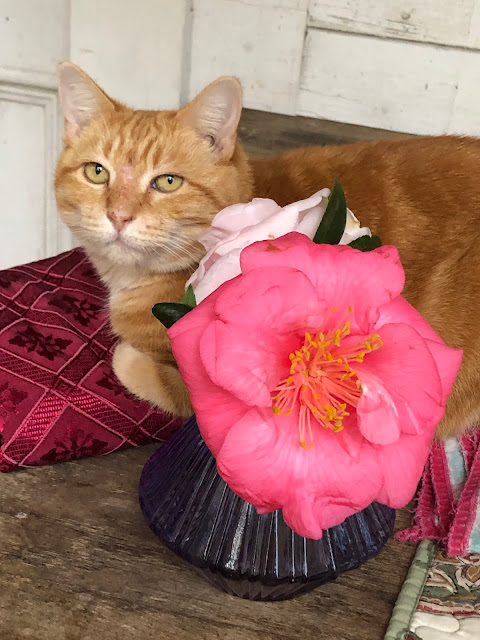 So. Here we are. I wrapped two Christmas presents today. I put my wreath out that I made from twisty grape vines and a fake cardinal approximately fourteen hundred years ago because I do really love it. I have not put out the nativity scene and I seriously doubt I will. It's two nights before Christmas and all through the house, many creatures are stirring, probably more than one mouse.
Although not if Maurice and Jack are doing their job.
Love...Ms. Moon
P.S. Speaking of Glamor Shots- 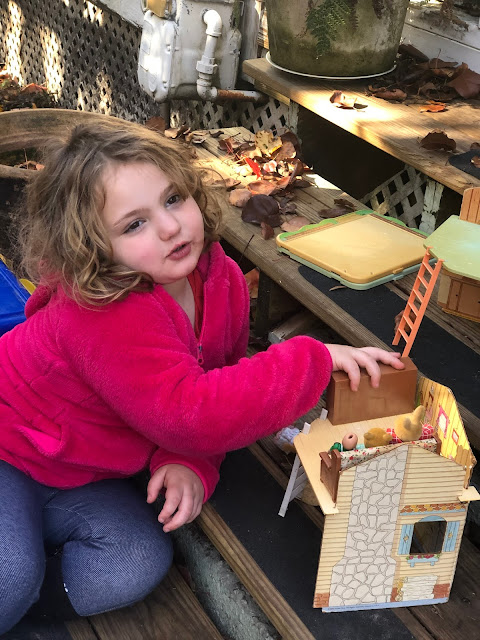