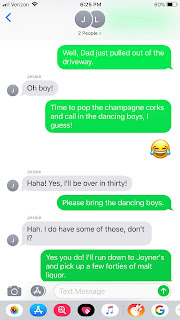 This is what I wrote to Lily and Jessie this morning after tearful good-byes were exchanged.
Well, okay, maybe not tearful but I did well up a bit, especially when I looked down at my husband's hand on my arm and was amazed, once again, at how large his hands are. His hand, lengthwise, spans my entire forearm. And I love those hands. They do so much and are so strong and can be so gentle. He really is the finest kind of man. He brought me roses and a card last night. He appreciates the fact that I do not make a big fuss over him leaving on these trips. I do get a bit upset sometimes before he leaves. Not that I'm going to be left alone. That part is fine with me. It's more the fact that he spends so much time and energy planning these adventures and it makes him so happy and, well, honestly, they don't involve me and that used to really, really hurt my feelings but I've come to more of an understanding of it. An awareness that this is absolutely part of who he is which has led to more of an acceptance on my part.
Men and women are very different creatures. That's just the way it is in my experience and the way this husband expresses his manliness (for lack of a better word) is a million times better than the way some men in my experience have felt the need to express their maleness.

So anyway, there were no dancing boys, not even dancing grandboys that showed up nor were there any malted beverages or sparkling beverages. Instead I took a walk and today I took my old, old route that I have not walked in forever and it was about the same. I took a picture of the fally-down house which is leaning even more precariously. Fifteen years I've been watching this old cabin take its own sweet time to collapse back into the black dirt of Lloyd. 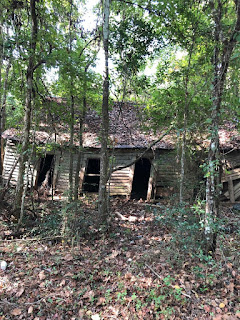 And when that happens, it won't be too long before it is completely covered in leaves and in vines and will become itself a part of that black dirt, wood, wallpaper, tin roof and all.
Here's a post I wrote about the house a long time ago.
My walk was hot and annoying and I was having thoughts of nothing ever changes here and everything is weary here and there's an American flag now hanging over the tin shed at the trash depot where the attendant hides in the AC watching a TV that someone no doubt left as garbage. 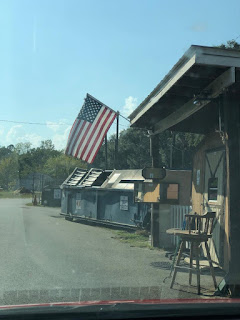 That flag annoys me more than anything. It is such a symbol of what's going on in this country. Doesn't matter what things look like, smell like, ARE like, just stick a flag on it and call it all good.
But then I walked into the post office and the post mistress had already seen me coming and had my packages up on the counter, ready for me to pick up.
She is such a sweet woman.
And I remembered that this, too, is Lloyd. We may fly a damn flag at the dump but we are also known by our post mistress who is kind and thoughtful and always, always says, "Good morning," and "Have a good day."

When I got home I did what will probably be my last huge load of laundry for at least a week. I hung it all on the line, the sheets and pillowcases my prayer flags dedicated to sleep. And then I had my lunch and drove over to Lily's where Jessie met us and the boys played with Maggie and we women lounged about and laughed and laughed and the kids played with toys and Sammy the dog who has overcome his shyness and fear licked my hand and arm so much that I finally had to get up because too much is just too much and August pretended that my body was a charger for his Transformer toy and I told HIM that in order for me to charge things, I had to get charges with cuddles and he accepted that and cuddled a bit, shyly, but sweetly and Maggie, who has no need of any sort of cuddle encouragement, curled up with me several times, just because she could.

The big boys got home from school and I gave them both Minecraft Creeper hoodies and I have no idea what the logic behind any of that is but I had given one to Owen for his birthday and it was too small so I ordered him a bigger one and gave the smaller one to Gibson. They were so very, very thrilled. 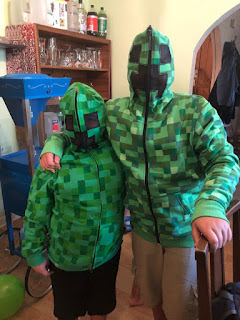 They will not be wearing them for awhile, I can guarantee you that. Not with temperatures in the nineties. But when it gets cool, they will have them.

More pictures of the babies. 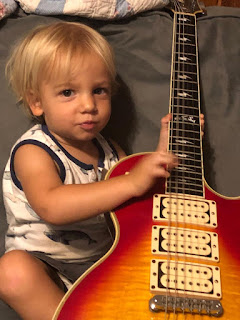 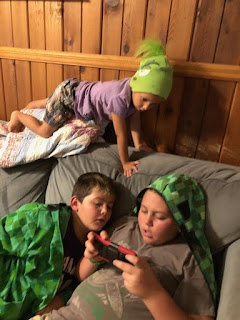 And then I gathered up my crock pot and bowl that I'd brought to the party and kissed everyone goodbye and got in my car and drove away and suddenly, I was having a very strange and unexplainable panic attack. It took me a second to figure out what was going on- this clawing feeling at my throat, the way I felt as if I couldn't breathe properly. Where did this come from and why? I had just had a beautiful afternoon being completely relaxed and loved and was merely driving down a tiny country road to get to my own sweet house where I would be happy to be alone and I don't think I'm kidding myself about that. Truly.
So I just breathed and actually took half an Ativan I had stashed in my purse and listened to Science Friday on NPR where they were talking about bread baking which was as soothing as any Ativan could be.
Sort of.
Differently.
But it helped.

And when I got home I determined to try baking a loaf of bread myself in a cast iron pot with a tight-fitting lid to see if it was really as amazingly different than cooking in a bread pan or on a baking sheet as they said it would be. I felt much calmer by then and took all of my trash and recycle to the Real American Trash Depot and got the clothes off the line and the sheets and pillowcases too and made up the bed and put the clothes away and now I do truly feel as if I've gotten everything accomplished that I need to get accomplished and can really relax into not having anyone's schedule but my own to consider, or hunger or comfort.
Perhaps it was just the idea that this was going to be my life for the next eight or nine days that caused me to panic.
Who knows?
Not me.

Despite the lack of rain, the pine cone lilies have still done their strange magic trick, producing these. 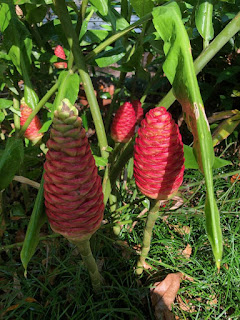 Another thing they talked about on Science Friday was sourdough bread which is hugely popular right now. I have been thinking and thinking that I truly want to make my own starter with the air-yeast of Lloyd. I think I will begin that project tomorrow, having gotten even more encouragement from the program.