The Beauty Of Earthly Magic 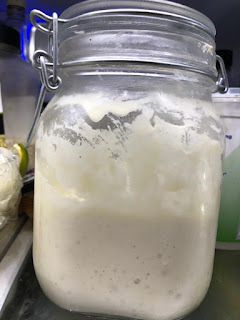 I have done it! I have captured the wild yeast!
Today was Day 6 of the yeast-making project and just as was predicted, my starter did indeed begin to double in size after a few hours which means it's ready. It smells fruity and yeasty and sour. So I keep the starter in the refrigerator and every week I have to take some out and feed it and water it to keep it alive if I haven't used some for baking, at which point I'd use what I removed and give it more food and water. Its food is flour.
The success I've had in this process so far has been almost inappropriately thrilling to me. I mean- THIS is how risen bread was first made. Okay, not with store-bought flours from modern wheat and so forth, but the principles of capturing the yeast and the fermentation which causes the bubbling rising of the dough are the same. Have you read about this?
In theory, this starter could be passed down for generations although I seriously doubt it will be. But I think about how it must have been not that long ago when packaged yeast wasn't a thing yet and I'm sure that when a woman got married she carried some of her mama's starter with her to her new home and that mama had probably gotten her starter from her mother and so on and so forth.
Like RNA- passed from one woman to another.
And if a woman lost her starter due to any number of things that could befall it, it would have been a major catastrophe, especially if she was isolated from other bakers of bread. I think of the women snowbound during the endless winters in the midwest or say...Alaska. It would have been nearly impossible, I think, to create another starter in such frigid conditions. The yeast needs not only food and water, it needs heat and that would have been hard to come by in a cabin heated by a wood fire where the temperatures probably never creeped above fifty or so.
Oh, I ramble.
But all of this reminds me of the first time that I was truly struck by the fact that cooking was in my blood. I'd been cooking for years already and was probably about fifteen years old and I knew I enjoyed it and I knew I could do it but at a primitive encampment on a mountain in North Carolina I was simmering vegetables in a cast iron dutch oven over a fire I had built myself to make into a stew and I had one of my few moments of perfect epiphany.
I was meant to do this.
So it makes perfect sense that fifty years later this little experiment has thrilled me so.

Last night, too impatient to wait for the finished product, I made a dough of some of the discarded stuff from the past two days' feedings, white flour, whole wheat flour, and oat bran, and set it to hopefully rise in a thick white crockery bowl with a red and white checked dish towel covering it and it did indeed rise beautifully overnight. I gave it a second rise today and baked it in a preheated and covered cast iron pot (you know how much I adore my cast iron) and this is what happened. 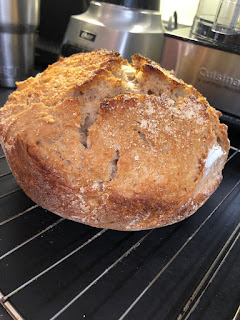 I have not yet cut into it but I will for my supper. I think it is beautiful.

Speaking of the cast iron pot, I have a little story.
Yesterday, on my way home from town, I stopped by the Bad-Girls-Get-Saved-By-Jesus Thrift store and they had a lovely, seemingly unused enamel-clad dutch oven. Not a Le Creuset but one made by Lodge, who makes quality cast iron ware. It cost ten dollars. And for some reason, I did not buy it. I picked it up, I set it down. I left and came home.
And last night as I was mixing up that dough I thought about that pot and kicked myself for not buying it. Jeez!
And so this morning Lily met me there after Maggie's dance lesson and guess what- it was gone.
Someone was a lot smarter than me.
Ah, sigh. When will I ever learn my lesson?
But my own non-enameled cast iron small pot makes a pretty loaf too.

Lily and I had a good time at the Children's and Maggie got a toy baby-carrier and a birthday teddy bear to go in it and I found Lily a pristine leather handbag for five bucks that retails for around a hundred and fifty so it was a good day anyway.

Last night I turned off the air conditioner and opened the window above my bed and slept as sweetly as someone whose Baku has eaten all of her nightmares. I did dream about a house and there were many, many of the same elements in it of mess and so much stuff but at least in this one there was an attic filled with antiques, although none very valuable, and people were showing up to buy them with money in hand. Lis was there and she was advising me on the worth of things and so there was a positive element to it. I know the house represents my life, my mind, my spirit in these dreams, no matter which dream version of a house it is, and it is good to know that I recognize the value even in the clutter and disorder and confusion and sometimes filth of it all. The dream was more interesting than depressing, more hopeful than despairing.
The air conditioner is still off. Has been all day.

Mr. Moon is on his way home, I think. Tonight I will eat salmon with braised greens and steamed vegetables and some sourdough bread. Jack will sleep up against my hip, solid and comforting, and the sweet, yeasty air of Lloyd will fill my room.
We shall see what I capture in my dreams.