Well, things are almost back to normal here in Lloyd. Jessie brought the boys out this morning so they could see their Boppy, and Vergil could do his packing. He left this afternoon for two weeks in India. It sounds amazing and wonderful but in reality, almost every moment of his trip is going to be taken up in the work he's doing there. But, yes, it will be in India, not, oh, say Orlando, which is pretty cool.

The boys were so happy to see their grandfather and it was imperative that TV get watched IMMEDIATELY! Mr. Moon was taking a second too long to join them in the Glen Den and August raced in to the kitchen to tell him that he'd gotten his chair all ready for them. I'm not sure what that entailed but when I went in, this is what I saw. 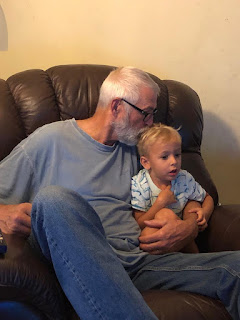 "What am I going to do when you're too big to sit in my chair with me?" Boppy asked.
"Oh, maybe I won't get too big and I'll still fit," said the boy.
Can you just imagine a big old gangly teenager sitting with his grandfather in that chair one day?
Levon likes to sit in his own chair. 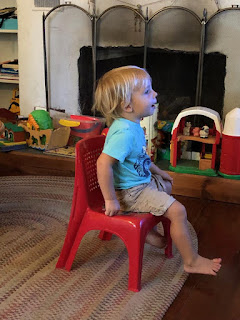 I made pancakes and bacon, and honestly there was not a whole lot of TV watching that went on. There were other things to do with Boppy outside which may have involved the tractor. I'm not sure. I was busy in the kitchen.
We spent some time talking about what it's going to be like with Daddy gone. August asked Boppy if maybe he could help a little.
"I think I can do that," said Mr. Moon.
We're all going to pitch in and help. I feel so bad though that Glen and I are leaving a week from tomorrow, first to go to Mayo for his appointment and then, on Wednesday we'll be heading to Roseland to celebrate our thirty-fifth anniversary. Bad timing for sure. I know that Jessie will be fine. She's an extremely capable woman but she'll miss her husband. He's so good at getting the boys to bed and getting up with Levon who wakes up at what some might call an unreasonable hour.
It'll be okay but they sure are going to miss that good daddy.

Owen and Gibson need to earn some money for the book fair and so they're coming over tomorrow (they don't have school) to do some work for me. I'm not sure what I'm going to have them doing but it may involve cleaning baseboards and the spindles on the stairs. And then we might all go to the river because soon it's going to be too cool for jumping in that icy water.
Maybe.
It'll be good to see the big boys. I miss them. "My boys," as Maggie calls them.

I had to run to town this afternoon to get some groceries. I'd run out of vegetables, mostly. When Mr. Moon left I bought a huge bag of "super greens" that I threw into almost every meal I made and I ate almost the entire bag. What's left is getting sort of funky. Last night we finished up the last of the  cauliflower and asparagus in the house. Do you ever wish they'd invent some different vegetables? You have your broccoli and your cauliflower, of course, and your tomatoes and your cucumbers and peppers. There are plenty of different greens to eat both cooked and raw. Green beans. Squashes.
Peas and carrots. Haha!
We go through onions and garlic like nobody's business. I get in such ruts. Sometimes I like to steam a big combination of vegetables, salt them, squeeze a bit of lemon juice on them and grate a little cheese over them. Long, long ago there used to be a restaurant in Tallahassee that served steamed vegetables and they were so good. Squash and potatoes and carrots and I don't even remember what all. I add green beans or asparagus, maybe some broccoli, onions, red peppers. I've also really been enjoying roasting vegetables in the oven with a little olive oil and salt and pepper. That's how I did the cauliflower and asparagus last night and I threw some halved cherry tomatoes in with them. Delicious! Added garlic is always a bonus. Maybe a sprinkle of balsamic vinegar which reduces as the vegetables cook. Balsamic vinegar is one of the best inventions ever as far as I'm concerned.

I must be hungry.

I wish I had something more interesting to talk about but the honest truth is- I do not. It's going to be a busy week and the next week is going to be, well, interesting. I'm trying not to get too anxious about what's going to happen at Mayo. I wonder if the supposed "best doctors" there will have some answers. I am grateful that after we leave there we will have the peace and the serenity of the river, the sweetness of time alone in the little cabana of my childhood dreams, and the proximity of the Atlantic Ocean which has been a sustainer of my soul since I was a little girl. Not to mention the beautiful pool with the spitting lions guarding each corner and the bamboo surrounding it all to make its own percussive music when the breeze picks up and feels like playing.

You gotta hold on to something. Love and Roseland do it for me.