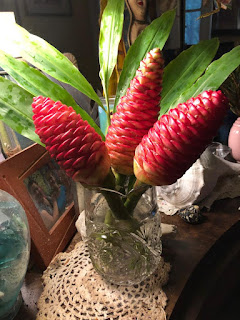 Oh, it was a rainy day today. I kept wishing I could send some of it to California. It rained torrents of rain. It was a wild and rushing and powerful rain. There was thunder and lightening and at one point I was on the porch and a bolt hit so close that I heard the thunder and the pop and saw the lightening at the same time. I told August about this later.
"Were you scared?" he asked.
"I was!" I said.
"Did you run?" he asked.
"No, but I did come into the house."
"Did you make a face like this?" And he made a terrified face.
"Yes!" I said. "I did!"

So I suppose it is obvious by now that Jessie and the boys came out for a visit. Before they came I made some little loaves of banana/apple/blueberry/pecan bread for them. Since Jessie isn't eating things like that, it makes me happy to make little treats for the boys. They weren't pretty, I'll tell you that. And they ended up being more mushy than bread-like but they tasted good. Jessie's diet is going well. She feels good and can already see some positive changes which of course, is the best motivation. She brought some avocado and cooked squash and cucumber salad and ate those and some of the roast chicken I cooked last night. I ate some of her squash and cucumbers and they were good. I put out some smoked salmon that Rachel left along with crackers and cheese and the boys ate some of that and a little bit of chicken and August ate some of the banana bread although Levon preferred the crackers. It was a veritable buffet!

When it was raining so hard I said, "Let's go sit on the porch swing and watch the rain!" and we all trooped out to the porch swing, Levon pushing the babies and some toys in the little baby carriage, but as soon as Jessie and I got settled, August said, "Let's go in and do a puzzle."
"Go in," said Levon.
Sigh.
He's at the repeating things stage. Sometime during the afternoon I said, "So rude!" about something or someone. I can't even remember but I must have said it with great drama because Levon kept repeating it in his little boy gravely voice.
"So rude!"
Here's a picture of him in the library. 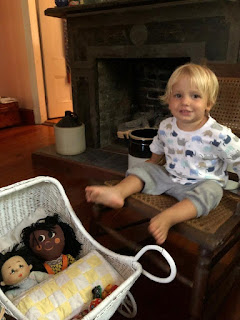 Jessie keeps saying that she needs to make an appointment with Melissa for him to get his hair cut.
"Oh, honey," I say. She laughs. She knows how much I love the babies with their long baby hair. They just look too old when they get that first real haircut. It's shocking and I don't like it. But I understand. He's going to be two in less than two weeks and I suppose it's time. He's not really a baby anymore but then again, he is. He isn't quite as obsessed with tractors and trucks as he was. Well, his vocabulary has expanded far beyond those two words. He did want to go out and look at Boppy's "big tractor" though. 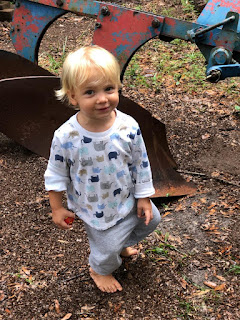 Such a beautiful child.

We read books in the library while Jessie got caught up on some of her diet/study related things. I really still can't believe, even after fifteen years that I live in a house with a library where I can read books to my grandchildren. But I do. 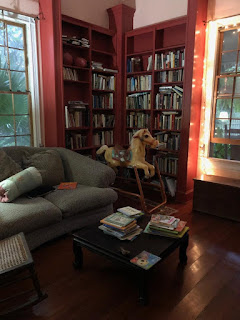 Before too long it was time for them to leave so that hopefully both boys would take a little nap. Good-bye treats were agreed upon and given.
Here's August in his car seat with a sprig of tea-olive that I picked for him. 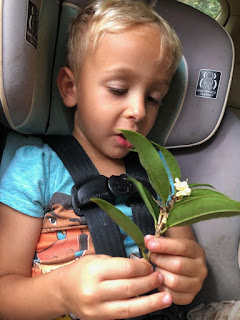 After they left I did some stuff around here and made a soup with venison and all the vegetables including a few of the tiny sweet potatoes I dug yesterday and the very, very last of the field peas which have been sitting, shelled and dried in a little bowl by the stove.
I baked my loaf of sourdough bread (is this loaf #3 or #4?) and I did a few things differently and it looks fine. I hope it's done all the way through. Hard to tell when you're cooking in a cast iron pot.

The laundry is all done and put away, supper is virtually ready. I've closed up the chickens who sleep in the hen house. Six do, six don't. The pine cone lilies are blooming and look lovely in my new Roseland Goodwill vase. I stuck the two succulents that I carefully dug from the woods in Roseland in a pot of dirt.
This is such a small life.
It's raining again. Lily sent me a very short video of Maggie running through a huge mud puddle on their road. I can't quite tell but I think she is naked except for a pair of underpants.
"Living her best life," Lily texted with the video.
Maybe I am too. A small life but my best life. Or at least the only one I am living right now.
Perhaps it would be even better if I shed my clothes and went out and danced in the mud like my beautiful curly-headed, strong-minded granddaughter. 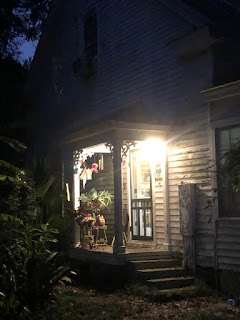