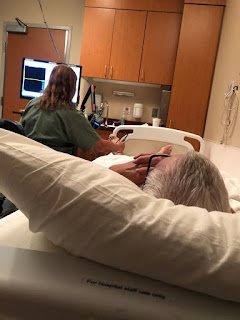 This was Mr. Moon getting an EMG this morning. Specifically, having jolts of electricity applied to his muscles. He said it wasn't fun. Really? We had to be at the appointment at 8:00 and so we chose to have something to eat in the "bistro" in a building next to where his testing was to take place.
I have to tell you- there are so many sick people in this world. So many people were carrying their files or bags of files and some were in wheelchairs and some were old and some were young. But there we all were in the bistro before the sun was really up, getting our eggs and bagels and coffee and the absolutely warmest, nicest person I've met at Mayo was the lady at the register there.
Of course.
It must be somewhat depressing to work at the clinic. At least in some capacities. Do they ever stop looking at a couple and trying to discern which one has come in hopes of help and perhaps a miracle and which one is the support looking for the same things for their loved one? One can appear as stricken as the other.
It all reminds me somewhat of Lourdes although of course I've never been to Lourdes but isn't a Mayo clinic the modern equivalent?
We all want to hobble in on our crutches and dance out without them.
So to speak.
Didn't see any dancing today.

Last night was rough. I was in sheer panic mode. I could hardly speak I was so anxious. I just sat like a mute thing, afraid to move for fear I'd crack and shatter.
It has not dissipated entirely yet but I'm well on the way to just my normal state of it. Which is a huge relief.

I suppose I should go back and describe yesterday's meeting with the doctor briefly. I've never quite experienced such a theatrical history-taking and exam. First off, the exam rooms are lit like a stage set or perhaps a hotel cocktail bar, as I wrote to a friend today. Dim around the perimeters with a light trained on an exam table which was the only thing in the room which wouldn't have fit in perfectly in that cocktail bar if the computer had been a cash register. That exam table may as well have been a zebra for the seeming absurdness of its presence. The doctor came in and was dressed to the nines. He wasn't tall and he was very, very trim. His hair and beard were perfect, his bow tie jaunty, his suit was seemingly a size too small which is what I hear is the hip way to wear one these days. Of course, I was put in mind of Pee Wee Herman. He was wearing loafers that somehow screamed Italian, Custom Made! His name was Bjorn Oskarsson and his accent was Swedish, his English perfect.
I felt like I was in a dream. Truly.
Anyway, it wasn't very long into the history-taking part of the appointment that both Mr. Moon and I felt that Dr. O. was not going to have anything new to add to the party. Before he even did the physical neurological exam he told us that these sorts of neuropathies can be divided into three sections as to diagnosis.
One third of them are related to diabetes. Which Mr. Moon does not have.
One third of them can be explained by various disorders and diseases which Mr. Moon has been tested for as thoroughly as medicine can do.
And, one third of them cannot be explained by science yet.
So.
He did the exam ("I will now have you stand up and extend your arm. Good. Other arm. Great." And so forth.)
It was, like I said, otherworldly. He was quite polite and respectful but I felt no real humanness from him. And I am quite sure that he was not hired by the Mayo for his warmth. I get that.

He finished by saying that he was ordering some blood work which we could get that afternoon and then was scheduling an EMG for today. And go from there.

After speaking with the doctor who did the second part of the EMG this morning, we were informed that unless something "funky" showed up on the EMG that there would be no more tests and that Dr. Oskarsson would call us.
He has not called us today so we are thinking that there was nothing really new to discuss although I think he probably will call tomorrow.

We were almost silly with relief to get out of the parking garage at Mayo and back out to the world. We stopped at Publix for coffee pods and a toothbrush and a hairbrush. We came back to our fun little house and changed clothes, drove down to the beach and walked onto the fishing pier where I could have gladly stood all day long, leaning on the railing and watching the green ocean and the incredibly normal and ancient and everyday activity of people fishing. I didn't want to speak, I didn't want the perfect peace I felt to be disturbed. 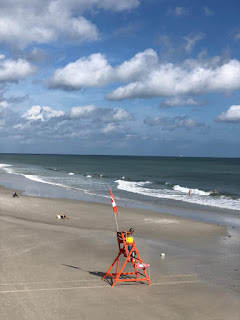 My husband seemed satisfied to do the same. We stood for a long time looking at the peaceful waves until finally we felt we'd gotten plenty of sun and walked slowly back to the car. We went to lunch at wonderful little hole-in-the-wall place that was both restaurant and seafood market and it was perfect.

And this evening we went to a movie! We haven't done that in probably a decade. We saw Zombie Land, Double Tap, and it was ridiculous and silly and like lunch, perfect. We ate popcorn for our supper and leaned on each other and enjoyed it all.

Tomorrow morning we'll be on our way to Roseland. You can only imagine how happy I am about that. I have to admit that last night when I was as absolutely fraught with the illogical fears I was experiencing as if I was tightly cocooned in a nightmare, even the thought of Roseland gave me no relief but now I'm so glad again to be going.

And I am also thrilled to not have to set an early alarm. I am not good with abrupt early-morning starts. It takes me at least half an hour to get the wheels all turning again.

That's how it's gone today. We're fine. We're good.
We have no new answers but we're plodding along pretty well as we are.
And we will just have to keep learning to dance in ever new ways.