A Day Quiet Enough To Hear The Music Of The Spheres 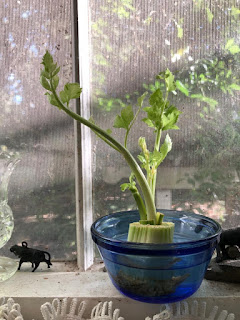 Jessie inspired me to do this from a sprouting celery core that she had growing. It's pretty, isn't it?

I have had the quietest day. I made a conscious decision to spend it here, at home, and to take it as easy as possible. My walks this past week have left my hips panting for relief and so I mostly sat and stitched away on overalls and I do believe that the blue ones are done now and shall go to August and then probably Levon. I have a green pair of children's corduroy overalls that used to be May's and I think I am going to decorate them for Maggie. I have already sewed on a pocket patch of a friendly bear at a campsite from fabric leftover when I made August one of his dresses. 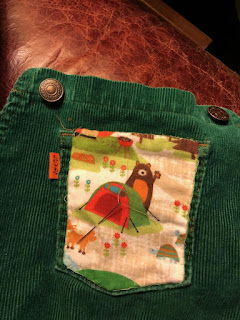 I've been watching "Unbelievable" on Netflix, sort of out of default. I swear to you that it takes me forever to find something I think I might want to watch. It's the same with me and audio books. The library has hundreds, if not thousands available but sometimes it seems, as I scroll endlessly through the titles and descriptions, that I have listened to every one of them that I want to hear.
"Unbelievable" has my attention. The cast is excellent and includes Toni Colette who is one of the best working actors today if you ask me and also Merritt Wever whose work I was not aware of but she is very, very good. The subject matter is rape so if that's triggering don't watch it although so far, I haven't seen anything horribly graphic. I think it's all handled with a perspective that shines a lot of light onto the subject of rape which has needed to be illuminated for a long, long time.
Since, oh...forever.

And so I have been sedentary for the most part which is quite unlike me. I have an old friend with whom I exchange e-mails almost every Friday and yesterday, when I asked about his mother-in-law who has been quite ill for a very long time, he responded "Don't believe that a sedentary lifestyle leads to an early death" which makes me feel a little bit better about my sloth today.

As I stitched, Maurice joined me on the couch. The poor old lady is so very brave to defy Jack's attempts to keep her entirely out of the house. She's been more insistent lately on hanging out in the house and wanting affection. She has been sitting on Mr. Moon's lap at times but since he's not here, I suppose that I have had to do. She still gets cranky as shit if I disturb her too much which can mean something as simple as trying to get my scissors out from under her. But so far (knock wood) she has not actually broken my skin with claws or teeth so I consider myself extremely lucky. 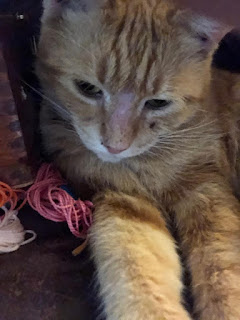 Here's the scarred-up tiny warrior herself. She really cannot weigh a third of what Jack weighs. I do give her extra treats but she is just not a big cat whereas Jack is a bit of a monster. Picking him up to set him outside hurts my back whereas picking up Maurice is like picking up a doll pillow.
Here's the large boy himself who has come to keep me company on the porch. 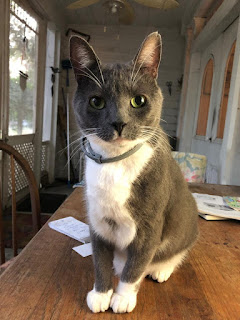 He looks far more svelte than he is in this picture. But he's a good bed-mate. He holds the covers in place. That's for sure.

Mr. Moon has made it safely to North Dakota and says he is glad of a bed.
I bet! I am so glad that he is safe and sound.

I did bake a loaf of bread in a cast iron pot with a lid last night. It went fine but it wasn't like the second coming of Christ or anything. 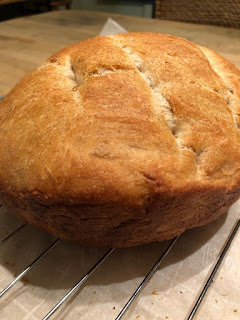 Still- pretty cool.
I mixed up the flour and water today for a sourdough starter. We shall see how that works out. Sourdough starter is like taking on the responsibility for a parakeet, I think. You have to feed it frequently to keep it alive. That's fine if I'm home but what if I ever decide to leave town? Which I will do at the end of the month. It's one thing to ask a neighbor to feed and water the chickens and cats, quite another to ask him to feed the sourdough starter. I'll figure it out.

I did get motivated to walk out of the house and to the post office just a little while ago when the same friend I mentioned a few paragraphs above sent me an e-mail imploring me to listen RIGHT THIS SECOND to an episode on the All Songs Considered podcast. It's one with Giles Martin who is George Martin's son. George was the producer and arranger and occasional musician and so much more on the Beatles' albums and Giles has recently been a part of the re-mix of Abbey Road which was truly the Beatles' last album.
Because I love my friend and because we share a deeply rooted love of all things Beatles, Stones, and Dylan, I immediately subscribed to the podcast, put in my earbuds and hit play.
Whoa.
As I listened, I walked to the post office and this was the sky over the house next door. 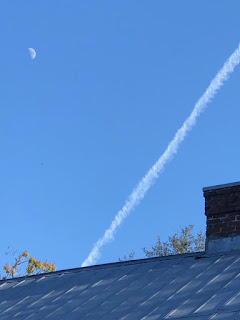 You know, at one point in my life I listened to the Beatles way too much. I had a completely misjudged boyfriend who was completely obsessed with them and for a period of time, a very difficult and hard and rather insane time, that's pretty much all I listened to. And although the Beatles had meant more to me than I can even begin to describe, that experience did something to me that in a way was as destructive as how beat-down my soul became. I never for a second quit loving them, quit believing in what even now I, as a sixty-five year old cynical woman believe, which is that they were (if this is possible) divinely inspired and the best band ever on this earth.
But.
Too much is too much and the association with the boyfriend (I shudder, even saying those words) was also too much.
And so today when I listened to this 26 minute podcast and heard parts of Abbey Road again that I had not truly listened to for many years with the new realization of what that recording experience had been like, what it had meant to those boys- John, Paul, George, and Ringo, I was given new ears. New ears to hear which voice was which, which guitar line was whose.
"This is Paul," Giles said. "And here's George. And John. Dirty John."
A chuckle.
My god. They were magnificent. Four separate human beings who came together and created something so vastly more than their parts.

Thank you SO much for being here. I am never lonely somehow, feeling that my insignificant words are being read and contemplated.
How could I be?
I think I'll open a can of peas tonight.