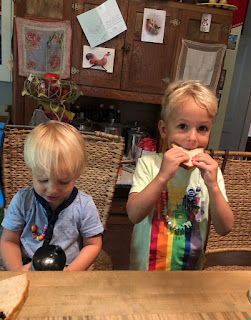 Vergil is leaving next week on a business trip to India and Jessie's new diet starts tomorrow. I think. Unless it started today. Not sure. Anyway, I knew that they could both use a little time to get things done that needed doing. With this diet Jessie cannot just have a day where she says, "Fuck it!" and eat a tomato sandwich and so she's trying to get things prepared that she can have on hand to make things easier. And going on a business trip to India?
That's got to require some preparation.
So I texted Jess this morning to ask if the boys would like to come over for awhile today and it turns out that yes, they would. So Vergil brought them out and we did all the fun things and they were very sweet boys. We started out doing something that I used to do with Owen and Gibson which is to play ball on the stairs. I'd asked Jessie to send over one of their very light plastic bouncy balls and she did and I took turns throwing it to first one boy and then another and they would throw it back. August sat higher up the stairs than Levon did and they are amazingly adept at catching and tossing back. So we did that for awhile and then we moved on to other things including necklace making with the new beads I'd bought. 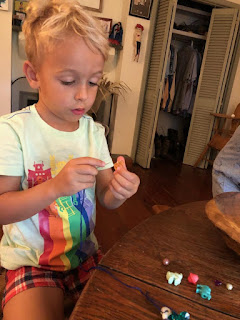 They were perfect for August's hands although Levon isn't there yet. He handed me beads and I strung them for his necklace. 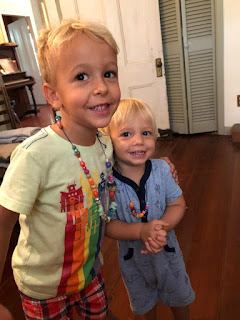 This all led, quite organically, to a contest to see who could collect the most beads off the floor into small bowls because there were a lot of beads on the floor. As one would expect.
Although August collected the most beads, they both got prizes- a cookie after their lunch although neither one ate more than a bite or two of their gourmet peanut butter and jelly sandwiches.
They also played with the plastic cocktail glass mermaids and animals and helped me try to get a sliver of glass out of my foot. I allowed them to watch a tiny bit of TV. We read books and August brushed my hair as I read. I didn't even ask him to! He brought up the idea but I was all for it. We looked at a big book about mermaids that I have and August and I discussed the various mermaids from different cultures. It was a most sophisticated conversation. We enjoyed the porch swing for a little while although Levon didn't really like that. I do not know why. And do you know that he hardly said "truck" or "tractor" at all today?
That's odd now that I think about it.
At one point August pretended to talk to me on one of my old plug-in phones that I keep for emergencies and as toys and he told me he was in Canada and that he'd gotten there really fast because he wanted to see Boppy. He also informed me that they probably have TV in Canada. I agreed that this was true.
We played the matching game and they rode the tricycles around and Levon pushed the babies in the stroller.
And so the afternoon passed and Jack, who has been napping on my bed for the entire day got some attention and love. He tolerated it.
We did have one small breakdown when Levon got his finger pinched in the step ladder. I felt terrible and got him an ice bag and took him to rock and cuddle and he asked for "Auga".
"Do you want August to come and hug you?" I asked.
He sniffed yes, that he did and I called to August and he came and hugged his brother and all was well, the tears immediately dried up and the boo-boo forgotten. My heart almost broke with the sweetness. I thought it was quite rational too. He didn't call for his mama but instead faced the reality of what his comfort options were and asked for his brother. Another logical, pragmatic boy, I think.

Vergil came back out to get those boys and August didn't want to leave but he didn't fuss too much about it. Their other grandmother always gives her grandchildren a going-home treat which in her case is usually a piece of dried fruit and so the boys have come to expect a going-home treat from me too. Today's treat was a prune because when I opened the cabinet where the treats are kept, that's what he saw and wanted. You have to love that. Prunes are pretty delicious.

It was a good time with them but I will admit that I'm a bit exhausted. We didn't do anything physically taxing but it certainly wasn't another sedentary day. After they left I tidied up and found some more beads and a few luridly colored plastic mermaids on the floor.

And suddenly it is raining! I've looked at the radar and this is not going to be much. A scattered shower indeed and the water is coming down in sharp, slender needles but there are a lot of them and I am grateful for each and every one. Oh, how heavenly it feels and sounds and smells! The air is cooling by the second.

Two of the young roosters have been going at it this evening for so long that they can barely muster the energy to do more than jump over each other. Liberace and a hen finally took control of the situation and broke it up. Damn roosters! They can't help it. They're wired to try and be alpha and that requires a lot of posturing and fighting. Eventually it will include too much fucking and when the hens start getting the brunt of the hot mess that young roosters are, it'll be time to get rid of some or all of those young roosters. I'm starting to wonder if I'm really still up for chicken-tending. It's not that much work, to be honest, and we all know how happy it makes me to have chickens pecking and scratching and clucking about the yard all day. But when one wonders whether the keeping of sourdough starter might be more of a responsibility than one wants to take on, it does lead to other thoughts.

And speaking of sourdough starter, August and Levon helped me mix mine up after I took out half and added more flour and water as you have to do. I tried to explain to August about how there is yeast in the air which will get into the flour and water and eat the flour and then it burps and farts and that's what makes the bubbles and will eventually make the bread rise.
This charmed him of course. He wanted desperately to try and hear the teensy tiny toots of farting yeast and refused to believe that it simply could not be heard. This led me to wonder if there's a super-sonic listening device which can actually hear the gas-releasing little yeasty beasties.
Who knows?
Not me.
But I do know that there is obviously yeast in the air in my kitchen because the starter is already starting to work. Whether or not I continue to the end with this project it will have been worth it, just to witness the funny little miracle of attracting yeast from seemingly nowhere, harnessing it and using it eventually to do the hard work of raising dough.

That's enough. I'm going to fancy up a tiny frozen pizza for my supper. I think that's about all I'm capable of doing tonight.
I'm looking forward to that. And the yeast is already included.