A Little Stab'll Do Ya 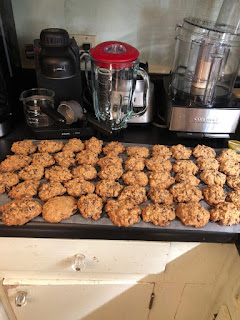 There are the traditional cookies I've made for my man who is about to leave tomorrow on his insane road trip to Canada. I say insane because their first scheduled overnight stop is in NORTH DAKOTA! Do you have any idea how far North Dakota is from Florida?
No, neither do I but I have a feeling that it's a very long way. The three men plan to take turns sleeping and driving and if I believed in such things I'd give them all St. Christopher medals to wear on chains around their necks but of course I don't so I've just made cookies.
I told Jessie yesterday that I was going to make cookies today and August perked right up.
"Are you going to make a lot?" he asked.
"Yes," I said. "Are you thinking that I should make so many that there will be some for you to eat too?"
"YES!" he said.
You can learn a lot in four years. For example- extra cookies are never a problem. That's one of the things you can learn.

I've had a busy, busy day. I woke up feeling pretty darn good despite the fact that I'd had dreams wherein I'd stabbed at least three men to death. In my defense I will say that it only took one knife stab apiece. And I have no idea who these men were except that they were really, really bad guys trying to hurt me and a little boy who appeared to be my son.
Maybe I woke up feeling good because I HAD dreamed that I'd stabbed at least three men to death. Who knows?
But I took a nice walk and did more laundry and hung it out to dry and swept the kitchen and the hallway and then I drove to town where I stopped first at Costco. I was going to text Lily and Jessie to tell them that I was alone at Costco which made me feel somewhat guilty and also weird but before I could do that, I got a text from Jessie asking if I was at Costco because she and the boys had just pulled in and seen my car.
And so I joined them and they joined me and I have to tell you that it's a lot more fun at Costco when you're with a daughter and some grandkids. Or two daughters and even more grandkids. I had actually only gone to get a few things for Mr. Moon to take on his trip and honestly, I was almost ready to check out when Jessie got there but to hell with that. I re-wandered the store with them and we looked at toys and went into the coldy room and got samples and touched the crabs wrapped in their plastic, carefully rubbing the spiny bits because that's just so interesting. We discussed why they have spiny bits and why they have claws and Jessie and I made each other laugh and all-in-all it was a lot of fun and it was a nice little lagniappe that we met up there, unplanned.
Jessie said that when they were on their way to the store, August had asked if I would be there and Jessie had said that no, I wasn't always at Costco when they went.
Haha!
Here's a picture I stole off the Facebook that Jessie posted yesterday of August and Levon. 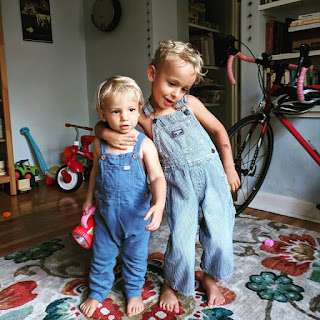 So yes, Costco and then Publix where nothing really exciting happened. And home again and I made the cookies and got the clothes off the line and now I'm waiting for Mr. Moon to get home to make his supper. He will leave tomorrow morning.
And although my kitchen smells deliciously of cookies with vanilla and pecans and chocolate chips and oatmeal, my back porch smells as if something has died under it which I suspect is exactly what happened. Yesterday I thought that it smelled like dog but today it more resembles...death.
Could be anything. Possum, raccoon, rat, armadillo. And we will never know because ain't no one fixing to crawl under there and look. No way. Time and decomposition will eventually deal with the problem and I'll just have to tough it out.

I HAVE to bring up Trump. The man is losing his shit as we speak. Did you see today where he asked China to investigate Joe and Hunter Biden? On camera? It's so pathetic. It's so weird. It's so self-destructive. It's so...Trumpian. And did you see yesterday where he asked a reporter, "Are you talkin' to me?" like he was Travis Bickle or something? Remember when Reagan used to tell stories about experiences that he'd had which turned out to actually be not real life experiences but ones he'd had as a character in some movie role? Hell, at least he had played the character. God. That poor president of Finland having to stand there acting as if nothing out of the ordinary was happening.
Ay-yi-yi. It would be funny if it weren't so damn humiliating and horrible and just plain terrifying.

I have a lot more to say about all of this but luckily for you Mr. Moon is home. For his last home-cooked meal for a few days I'm going to make him some broiled snapper and fried green tomatoes along with leftover shrimp and grits which were, I have to say, amazing.
It's going to be odd to have him gone for over a week but I figure I'll survive.
I always do.

See you tomorrow. Or, you know- I'll be checking in. It would be nice if I didn't have to stab anyone in my dreams tonight. I'll let you know how that goes.