We're Going To The Beach Soon And Thank God

This is why you have a grandmother: 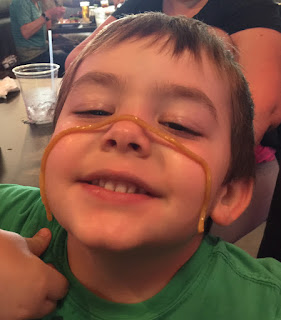 Because when you are four years old and put a noodle over your nose in a restaurant, she does not say, "Stop playing with your food." She says, "Oh, let me make you a mustache with one of these carrot slivers."
And she does. 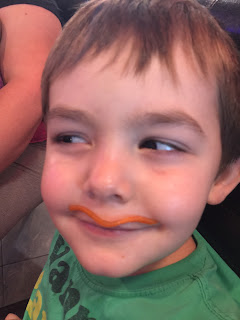 And you hold still the way she tells you and she takes your picture and it is fun.

It's been a hard day. Just physically hard for me. I've been exhausted and achy and all I did was go to town and have lunch with Lily and Jessie and the kids at a new Asian fusion place that was simply awful. Still, we had fun and my fortune cookie gave me the eternal wisdom that, "If winter is here, can spring be far behind?"
"Wonder how many night's sleep Buddha gave up to come up with that one?" I asked no one in particular.

Then we went to Target and got a few things for the beach because on Sunday we are going down to St. George to stay in a rented house and all who want to come may come and Jessie and I, I believe, are going to be there for the entire week. Since there are children involved, canopies must be purchased and toys and vats of sunscreen and hats and tiny sunglasses.

Jessie and I moved on to Old Navy where August tried on swimming suits. 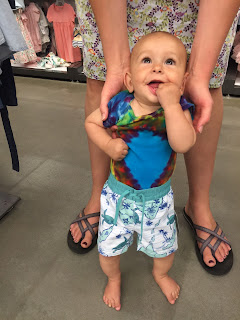 Little surfer dude with great big eyes.
I got Jessie a few things for her upcoming birthday and then they went home, August truly ready for a nap and I still had to go to Publix and by the time I got home it was after five and I still had to take the clothes off the line, make up the bed with the clean sheets, put everything away, check on all the chickens and cut some up a few grapes very fine for all the babies, and start dinner.
I had thawed out what I thought was ground venison to make some plain old spaghetti sauce but what I had actually thawed was venison sausage and I went on and used it anyway and it's so salty we probably need to take a gallon of water each to bed.
Fuck it.

The little crippled chick seems healthy but still does not want to walk on that foot. I think her entire leg may be messed up and I'm not sure what to do about it. People on the internet seem to use everything from pipe cleaners to tape to deal with these problems and I guess that tomorrow I'll do another review of the situation and go from there.

And that is about the most stressful thing I care to deal with tomorrow. I plan on staying home and watering plants and taking a walk and not do any rushing about, driving in traffic being tailgated by assholes in Lincoln Continentals who obviously believe that going 50 in town in a 40 mph zone is ridiculous and being beeped at for taking .5 seconds to gun it when the light turns red.

This may be the vacation in which I teach Owen to make martinis. I think he can handle it. I think he's ready. And Gibson is certainly capable of spearing an olive onto a toothpick. These children need to start earning their keep.