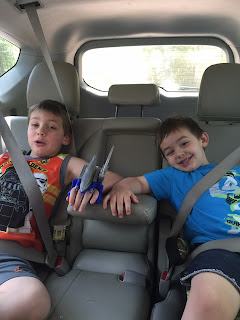 It was another one of those days when I woke up and knew I had to get my head out of my ass and so I went and got those two wild boys which was good because their mama worked all day yesterday and needed some rest and snuggle time with the Beautiful Magnolia June. When I got to Lily's house at the end of the rutted clay road that leads to it, there were two boys standing there, waving their arms and laughing out loud and I began to smile and I pretty much smiled all day.

There they are, strapped into Mermer's space Prius, seats all the way back so that they could relax. Because you know- their life is so stressful.

We did a repeat of last Sunday for the most part. They helped me clean the baby chick chest and then they helped me water the plants in the back yard which is always fun. 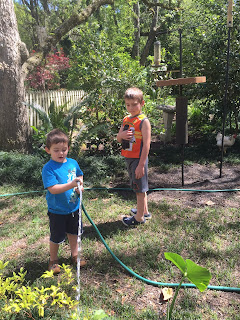 After that Owen begged me to look online for a science experiment we could do and we found one that involved water, oil, food coloring and an Alka Seltzer called Blobs In A Bottle. So we did that and it was pretty cool. The amount of science involved was extremely slight but who cares? We used scientific equipment like...a funnel. So yeah, it was educational. Right?

Then Boppy got home and we all hunted for bugs for the chicks which is more damn fun than hunting Easter Eggs. Those boys scream and call out, "There's one! There's one!" as we turn over rotting logs and rocks to find creepy and crawly things. 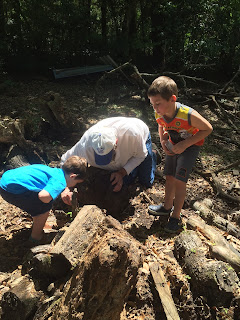 It's so odd how all of us will pick up any bug-like critter, even the really weird-looking ones if we're hunting them for the chicks. Even I do it. Hell, I've grabbed maggots out of the compost with my bare fingers to take to chicks. I have no idea why this is. Because the bugs are now considered food rather than something disgusting? Whatever. It's fun.
We collected a good many insects and a few spiders and centipedes and worms and we took those and some violets and sour flowers to feed the babies. Here's what the boys look like when they eat sour flowers. Especially the stems. 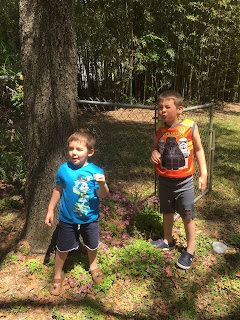 The chicks ate everything we gave them with great gusto and I had no idea that they liked flowers but they do. It is funny to watch a tiny bird run to catch a bug and then try to hide from the rest of the chicks as they chase her down to try and steal her prize. Is this cruel? I don't think so. If those chicks were being raised by a mama, they'd be feeding themselves bugs all day long by now.

We kicked bamboo which is still coming up at an alarming rate and we played Battle and we played The Matching Game and Boppy set up a shooting gallery for B.B. gun practice with Owen while Gibson and I had another tea party.
This time I just went ahead and put a towel down under the tea pot and cups and told him it was a tablecloth. Worked a charm. You have never in your life experienced as macho a tea party as the one you might share with Gibson who announces everything he is doing with his outside (only) voice as he is doing it, all the while using dramatic arm and hand gestures. I've never met anyone in my life like Gibson. He's rare and precious.

And then their mama came to get them and I got to hold and kiss Maggie who had just gotten a bath so that every time I sniffed her I almost fainted from the deliciousness and she was wearing a beautiful white cotton and linen old-fashioned jump suit sort of thing with bows and buttons. Lily said that she knew why such garments had decreased in popularity since the olden days- we don't have nannies and servants to do all of the buttons and bows up. But Lord, it was sweet. And now they're gone and I'm going to cook some shrimp and crab claws that Mr. Moon bought on his way home and a salad with the new mixed greens and arugula that Mr. Moon planted a few weeks ago, already ready for eating. I sent Lily home with beets and carrots and I kissed all of the children when they were buckled into the van and told them I loved them and kissed their mama too.
She is such a good mama. I am so grateful she lets me take those boys for no other reason than that I need some Owen and Gibson therapy.
And I needed it today.

My ashe magnolia has a bloom on it. 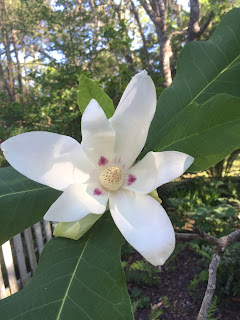 This morning it was still a bud.
Beauty can be brief and transient. Best to note it and enjoy it while we can.

Have I mentioned lately that Luna, The Oldest Cat In The World, is still alive?
She is.
Sigh. And sigh again.