Dear Mr. Moon- This Is What I've Been Doing With My Time And Our Money Since You've Been Gone

Well, if I am a bit bi-polar, I sure do love the days when I'm feeling good.
Today was one of those days.
Jessie and I went to two plant nurseries and we let old August tag along because we kind of like him and although he still isn't house-trained, he's pretty good company.
That boy...
He's been kissed so many times in his young life that if you lean in to him, he'll plant those pretty little lips right on yours. Or your face. Whatever.
And he had a great day, being outside and seeing all of the pretty plants and flowers and getting compliments and swoons from ladies everywhere. 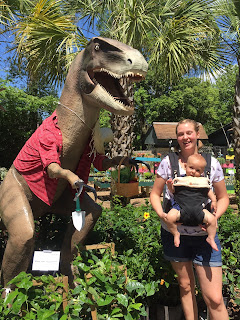 Here he is posing with the rare and endangered Farmosaurus. Wouldn't that dinosaur look good in my garden? Yes. Yes he would.

Jessie has the fever to get her yard tidied up and more filled with good growing things and so we were on the hunt for bananas for her to plant as well as things for a butterfly garden. We went to the biggest local nursery and she bought various butterfly and hummingbird attractors but their bananas were a bit pricey so we saved that purchase for the next place we went.
I bought things too. I've been wanting to put something in next to one of the sheds on the property which gets quite a bit of sun, right next to the spirea. I had though I might want some different colored phlox than the ones I have growing everywhere or perhaps some pretty canna lilies but then I saw the roses and I just felt all dreamy and drifted around like a butterfly myself, sniffing this blossom and inhaling that one and I settled on a Louis Philippe which is an antique rose meaning it doesn't need all the pruning and fertilizing and pest control that newer hybrids do. Plus, this yard just doesn't seem suited to the more formal roses but rather to the blowsy, free-growing ones. I dug a hole and planted it and I surely hope it does well. 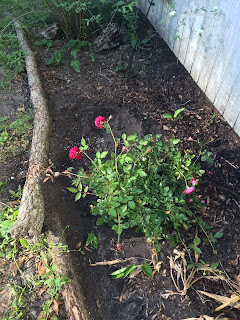 I intend to mulch it with a good layer of leaves and I watered it in good.

Okay. So. A rose. No big deal. That's not mania, right?
But then I saw a collection of succulents planted in various containers. For some reason, I've been drawn to the succulents recently in a big way and even bought three little ones at the Walmart when I was there a few days ago.
But these- oh, be still my heart.
So I had to buy this one. 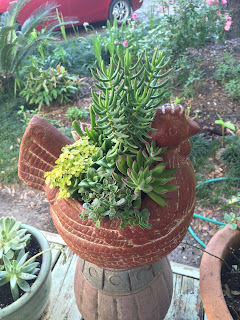 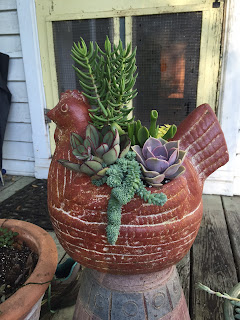 I mean...I MEAN...what could I do?
And there was Jessie, not just being an enabler but an encourager.
"Mama," she said. "Just buy it."
My children have always been the boss of me. This is just the way it is so I did buy it and there it is on my kitchen porch on top of a clay vase that I've never figured out a use for but it makes a pretty nice pedestal for that lovely hen and hopefully, will prevent my real chickens from pecking it to bits.

We moved on to the next nursery where we got two banana plants for Jessie and I ended up buying two Coumbine baby plants that I wanted because they remind me of maiden hair fern, my favorite. I planted them on either side of the Buddha by Elvis's grave in the front yard in the rotting hollow log I've been planting things in for a few years. 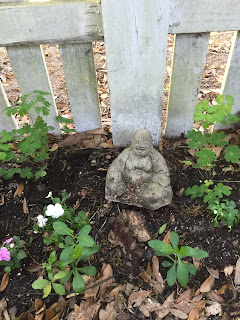 I also bought a huge new porch plant that I've put in the pot where I just removed a split-leaf philodendron that I've been growing for about thirty years and which has given me countless babies to repot and/or pass on. I did not just throw that mother plant away of course. I am not heartless! It has grown so leggy and fragile lately but I've planted it in the real, true dirt and hope to be giving it a second life. We shall see. Meanwhile, the new plant looks very much like a split-leaf philodendron itself and may well be one but a smaller-leafed one. It just charmed the hell out of me. 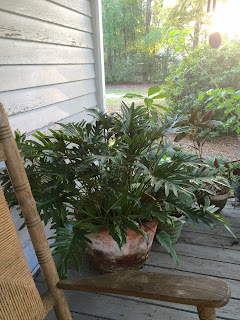 I promised Jessie that I'd split it up and give both her and Lily a piece of it but when I took it out of its plastic nursery pot it was way too pot bound for me to even consider doing that. Its roots are as tangled and twisted as the neurons in my brain and I am no surgeon. But I think that if I'm patient, it will eventually give me some of its new babies to share and I will.

One thing I've learned over the years, not just from experience but from the words and advice of other gardeners is that gardens and yards take patience. You put in plants and hope they'll grow there and if they do, great! Plant more of the same in the same location if they please you. And if they don't thrive there, move them somewhere else where the light and soil requirements will be more suitable. Hopefully. It takes years to figure out this shit and I have no more understanding for people who just hire a service to come and landscape their yards than I do for people who hire interior decorators to set up their library. Every plant in my yard that I've put in has a memory, a story, a history. They all mean something to me. Ferns that were dug up in the woods when I first started walking in Lloyd which I planted and which have thrived. Camellias that we planted as mere twigs which are now taller than I am. Palms that I have bought and planted or were given to me. The phlox that my neighbor at my former house gave to me as babies, so tiny that their roots were hair-like. My darling Sue-Sue's day lilies. The azaleas I put in so long ago and which are now, finally thriving after surviving all the years of being pissed on by dogs too lazy or old to get more than a few feet away from the back door. Plants I've rooted, plants I've transplanted, plants I've bought. Plants I started and carried with me from decades ago.
And there are so many things growing here that were here when I moved in. Not only the giant oaks and magnolias but a few roses, the tea olives, the bananas, the trillium, the tung trees, the azaleas which have probably bloomed here since before Christ lost his foreskin.

The older I get, the more I love this dirt, this yard, these plants. I'm not sure I've ever appreciated a spring as much as I am appreciating this one. And perhaps I've never appreciated the idea of the great gift of leaving beautiful growing things to survive me when I go.
It's a bit like having grandchildren. You look at them and you realize that a bit of you will survive long after your death, just as I carry what my ancestors have given to me.
We don't plant Live Oaks for ourselves. We plant them for those who will come after us.

My grandchildren or someone else's.

I remember talking to old Mrs. Miller when she was alive. The woman who lived across the street who had grown up in Lloyd and spent years in this house as a child.
"That yard has never looked better than it does now," she told me.
I wish she could see it this spring. I think she would approve.