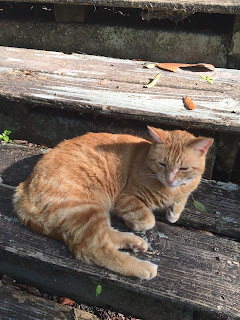 Woke up this morning with the worst dream hangover ever. I believe I had one of the strangest dreams of my life. I was working in a giant rug factory (as in the factory was huge and the rugs were huge) and I witnessed a murder and the rug factory people were trying to kill me so I couldn't rat them out about the murder thing going on in the rug factory and a darling little butch chick was trying to help me and she was so funny and so smart and it all involved chases and cars that wouldn't start and I don't know how it ended up but suddenly, I was in Asheville, NC where I was living with most of my family.
I had a sort of gig working at a co-op type cafe and I was trying to make a breakfast there of black beans and a grain and cucumber noodles but the newest health guidelines insisted that you need to eat your grain the day before you eat your beans and...
Did I mention trying to wash a giant quilt in the washing machine at the co-op?
So then I gave up on the bean/grain/cucumber breakfast and was simply trying to shop for eggs and bacon but the bacon was like forty dollars a pound because it was organic and locally-sourced.
Of course.
But wait! That doesn't include the part where Jesus freaks were trying to save my husband's soul.

So I woke up confused and anxious.

And I've been thinking a lot about how much harder it is these days to make any sort of decision because whereas you once chose what to have for a meal according to
(a) What you wanted, and
(b) What you could afford
you now how to consider every fucking ethical/health/moral/carbon-footpring/animal cruelty issue involved around it and the media is extremely happy to tell us what we should be eating and exactly why and it all changes about every fifteen minutes.

And it's all like this. And don't get me wrong- I hate the idea of factory farms and heavily sprayed and artificially fertilized food and also, child slave labor (where's that chocolate you're eating from?) and so forth. But it's not just food. Did you actually just buy a bottle of water? Do you have any idea how wrong that is on so many levels? Everything from the type of wood chips you use in your landscaping (never use cedar- I'm serious) to whether you vaccinate your child or how much screen time you want them to have (screen time!) or whether you let them play outside by themselves or what goddam bathroom you are allowed to use or whether the detergent you're using is destroying the planet (I'm pretty sure it is) to...well. Everything.
There are SO many issues and I'm not joking about this and I'm not making fun of the fact that we now KNOW more than we used to and that the options are becoming more and more worthy of debate. But hell- we used to eat whatever the grocery store stocked and none of it was grown in other countries and shipped in at great, huge cost to the environment and fish wasn't farmed in Thailand. Don't get me wrong- it wasn't Eden and it wasn't Nirvana. Rivers were being polluted and poisons were being used and although we didn't realize it, we were destroying the ozone which has led to where we are now.
We just were blissfully ignorant.

I feel so sorry for today's parents. There is absolutely just too much to consider. Even for us without children going to the grocery store is a lesson in too-much/too-much/too-much. The way every parent used to raise children would pretty much be considered a crime these days. Seat belts were still brand new and car seats were a damn joke. They barely contained a child, much less protected her from injury. If you told your kids now to go outside and don't come back until supper time, the DCF would be notified and someone would be knocking at your door. And yet- we survived. If we did fall down and hurt ourselves, we knew how to use the iodine and band-aids. If we got cactus all stuck in our legs we knew where the tweezers were. No one worried about whether or not our shampoo had toxic substances in it. Did you like Prell or did you like Breck?
Parents were usually only involved in case of snake bite (and actually, despite the fact that I lived in one of the snakiest parts of the world, I never knew anyone to get bit) or broken bones or third degree burns. If you got strep throat, you went to the doctor and they gave you a shot in the butt and no one knew about micro-biomes which is probably why all of us old people are on heartburn medication which is now being shown to lead directly to dementia.
If you got a terrible headache or a fever, you got an aspirin. No one had ever heard of Reyes Syndrome or whatever that is which I am too lazy to look up and actually, baby aspirin was a treat because it was delicious! Our vitamins (if we got them), were too and they weren't even GUMMY VITAMINS which now even adults can enjoy.
If we had a car and a dollar, we could afford to take a Sunday Drive after lunch after church on Sunday. This was a big deal. "Come on, family! Let's take a Sunday Drive!"
We weren't worried about fossil fuels. Did we even know what gas was made from? I'm not sure.

We just did what we did and no one overly worried about it. You sent your kids to the nearest school and just assumed they'd be getting a decent education. Teachers paddled the shit out of kids or sent them to the principal for an even more vigorous paddling because teachers were always female and the principal always male and thus, stronger.
Always.
And thank god we did start realizing the outcome of some of this stuff. I'm so grateful for that. And I'm grateful that people are now more aware of things like domestic abuse and sexual abuse of children and civil rights and women's rights and gay rights and the education of differently abled students and how our actions affect the environment but it sure does make every decision a thousand times more difficult. No one cared a bit out a child's self-esteem or realized that telling a kid with dyslexia that they were stupid might actually be damaging which was horrible.

It's no wonder we all suffer from anxiety and depression. No one is capable of taking all of this in and constantly having to make the "right" decision whether it's about dinner or our children's healthcare or whether to pay for treatment for a pet's cancer. Add in whether or not we are being our "genuine self," are finding meaning and worth in the work we do and if we are or are not self-actualized.
No one.

It's hard enough just to decide what you want for supper on the simple merit of hunger. Ask any housewife.
If you can find one.

All right. Enough. I have eighteen things going at once which is making me crazy and I can't seem to prioritize and my baby chick's curled toes may be the least of its problem.
I've sat down to write this in about forty different sessions and thus- it sucks.

But do you get what I mean?
It's so hard. And we're all peddling as fast as we can and doing the best that we can despite the fact that we have all of this knowledge, some of it genuine, some of it not-so-much and have to make the best decisions we can and then, we so often feel as if we have to defend those decisions to others whose business it really isn't but who have no problem speaking their truth to us.

Where is Mr. Rogers when you need him? He used to tell me every day that he liked me just the way I was.
I wonder if his sweaters were made from organic and non-cruelty raised sheep?