Ask And Ye Shall Be Given 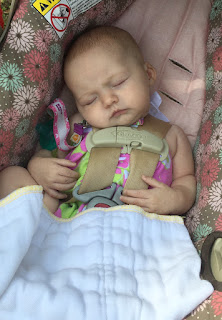 Sometimes I am smarter than I know and today was a good example of that. I realized that what I needed was a visit from grandchildren and I texted Lily and asked her if she'd like to come over and she said that yes, she would, she was having a hard day too.
And soon they were all here and the first thing we did was to clean out the baby chick home and that meant that the boys could hold the peeps and gently put them in the box they came in so that I could refill their water and food and clean out the shavings and poop and give them all fresh. We all loved it- Lily and the boys and I, and the boys came up with a few new names and the one I like best is the one Gibson gave to the little runt that I was so afraid wasn't going to make it but who now runs around and peeps and eats and drinks with as much energy as her flock mates. He named her Dearie. 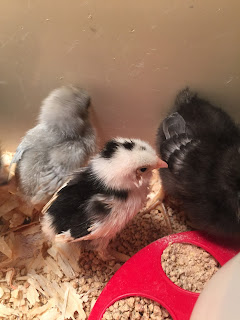 Oh my. So perfect.

We went out and kicked bamboo which is coming up with almost preternatural swiftness. Owen peeled and took a piece to the kitchen to prepare as a snack for us. 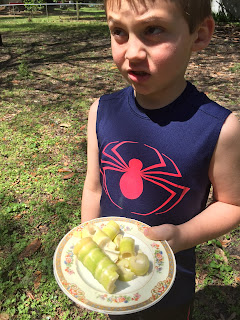 It is not as delicious as it looks, let me just say. But it was sweet of him to make it. Did I tell you that this boy recently got all A's and E's on his report card?
He did.
We are so proud of him.

Boppy got home from the river and Magnolia woke up and her grandfather held her. 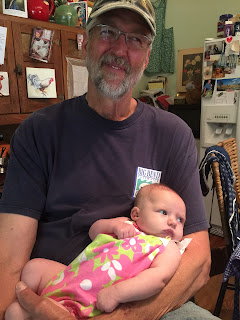 She is just at that perfect baby doll age where she is holding her head up well and looking about and smiling and starting to laugh and when she smiles, her whole face smiles, her eyes, her cheeks, her mouth. I love her so much that I can barely stand it but I've been through this before and I know this is the way I'm supposed to feel about her and that if I sometimes cry just from the sight or smell of her, then she and I are both doing our jobs and proceeding as nature intends.

The boys wanted to do all of the Mermer House things. Owen and I played a rousing game of Battle and he handily beat me. It was so much fun and I thought about how we used to play cards when he was little and I made up games to teach him numbers and here he is now and it makes me feel good to see him so quick and sure of them now.
Gibson wanted to play the matching game and so we did that too while Mr. Moon gave Maggie a bottle. 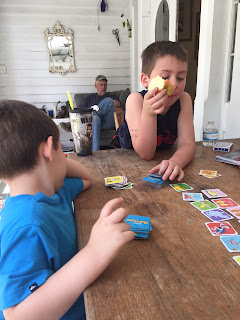 After that, Boppy and Owen put a puzzle together and Gibson and I had a tea party which was mostly about spilling water everywhere but who cared? 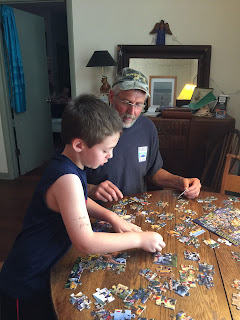 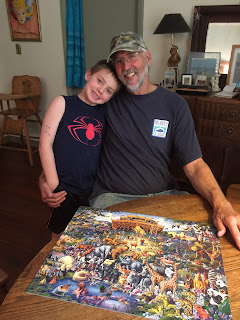 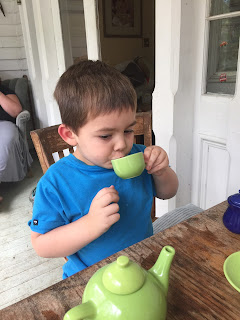 He cracked me up so much. When he finally got all of it arranged to his satisfaction, he threw his arms back and said, "Let's have tea!" and then, using his Gibson voice which is as loud and rusty as a redheaded rooster said, "I AM THE TEA MAN!"
I tried to have a polite conversation with him, calling him Mr. Gibson and that was fine for a moment but then he went back to pouring water everywhere and swigging it down.
It was awesome!

All during these adventures we had to go check on the baby chicks again and again and I showed Owen how to gently hold tiny Violet (which is his chick, according to him) against his tummy under his shirt and how quiet and still she gets because she feels as if she is under her mama's wings. He liked that. But then the boys and their grandfather decided to go out and find bugs to feed the chicks and so they did and brought them in and if there's anything more fun than watching tiny chickens kill and eat bugs, I have no idea what it would be.
Boys.
Gotta love 'em.
And it turns out that tiny chicks are far better at killing and eating bugs than you could ever imagine.

And of course there was Maggie holding and Maggie changing and Maggie adoring and making-Maggie-giggle and kissing Maggie and telling her how much we all love her.

It was absolutely the best. All of it.
I even got my porches swept which I've needed to do for weeks and there were snacks and chats and when they were all loaded into the van and we were saying good-bye, I said to Owen, "Did you know that when you were Maggie's age and I used to take care of you, I would drive you all the way to Publix so that your mama could nurse you on her break?"
He was a bit embarrassed to hear this and a bit proud and a bit delighted and we talked a little bit about how I've been taking care of him since he was a tiny baby and this is why we are such good friends and know each other so well.
And it's true.
I tell you what- when I think about the fact that I'm not going to be here on earth forever, the thing that makes me saddest is that I won't be here for that boy and for his brother and his sister and his cousins forever the way I would want to be. I know that what I have given them and hope to continue giving them for a while, at least, is important and irreplaceable, in a way. No one can love anyone the way a grandparent loves a child. It can be a bond which is as mysterious as it is pure. The love I feel for these babies is absolutely unconditional. Oh hell- I know when they're being disrespectful or naughty but it's so easy to laugh and forgive them, chide and then cherish them.
I hope they remember this sort of love and that it gives them a sense of self-worth as they grow older which sustains them.
That's what I hope.

And so that is what I did today and then Mr. Moon and I got out in the garden and he planted tomatoes and I weeded and he tilled the part where we want to plant sweet potatoes. He is about to go down to the coast tomorrow to fish with friends and his sister for a few days and I hope to get a lot done in that garden. To plant the sweet potatoes and creamer and field peas and to mulch. It's so obvious that the dirt is much happier under mulch. That is where the earthworms live and as the mulch breaks down it enriches the soil as well as keeping moisture in and deterring (somewhat, not entirely) the growth of weeds.
It will be good to have a few days to concentrate on things that need to be done around here although I will miss that man. Hopefully, I'll go join him and my sister-in-law for a day or two to shop and eat in Apalachicola, perhaps to cook some fresh grouper.
We shall see.

All I know for sure is that I've had a beautiful day and have received even more love than I could give and that the sky has cleared and the mulberries are turning pink and the chicks are all alive and it is a little bit cooler and I am grateful, as summer begins its inevitable, debilitating approach.
That for this moment, I could not ask for more.
That on a day when I woke up ready to cash in my chips, I have experienced such prosaic and miraculous goodness. 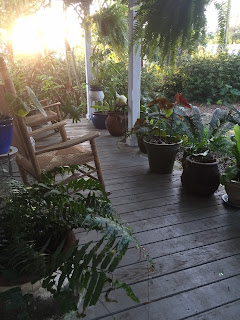