Not My Best Day

I did go to the Goodwill but all I got was icky-feeling fingers. The internet has ruined Goodwill, as far as I'm concerned. The treasures are few and far between now. Did you know that in fact you can shop at Goodwill online?
You can. Here.
I didn't hear any decent conversations either. Mostly just "Oh, look at this! I just love these little cherries. Isn't that cute? Don't you love those little cherries?" The younger woman who was with the cherry woman did not seem to be as charmed by the cherries but she was being patient.
And truthfully, I wasn't in the mood to buy anything. There was a darling little wicker rocker for 25 bucks that I could have easily put in my car and also, a pair of silk and linen pillow shams which were lovely that I didn't buy. Now I wish I'd bought those things but I didn't and there you go. Someone else can make themselves happy with them.

And so I went to Publix where a great crack of thunder made all of us shoppers look up in brief alarm and got a few things and came home, the sky bruise-dark, the rain coming and going.

I put a new bandage on Baby Chick this morning but then decided that it just wasn't offering enough support so when Mr. Moon came home he helped me to fashion this contraption. 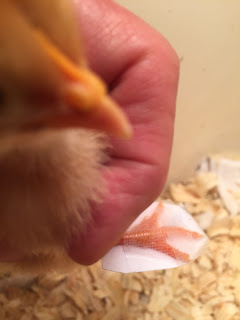 It is made from a piece of an index card and that breathable medical tape which I love because you can stick and unstick it over and over again like a nervous twitch. I swear to you- that tape was about my favorite thing I discovered in nursing school.
Well, that tape and my friends.
Anyway, even if that chick's foot never fully develops properly, I think s/he'll make it. She is truly the feistiest one of the bunch and even with her duck-foot splint can outrun the other two and is definitely getting her share of the food and treats which so far are greens and grapes.

I am heavy in soul and body tonight but tomorrow we are again going to the "pool with the tunnel" as Gibson calls the Wacissa. There is a small bit of the road to the river which is canopied by great oaks and he and Owen love that. And a pool is anywhere you can swim.
I hope to actually fully submerge myself in the clear, cold water and also hold Magnolia a lot. I have not seen her in days and I miss her sorely. I will also get to see Owen's new summer hair cut. He trimmed his own hair this week and as this is the fourth time he has done this (we think it's a plot to go see Melissa), his dad buzzed it off. 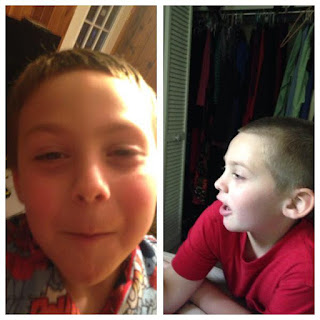 He is growing up too fast. I can't stand it.
And yet, I suppose I have to.