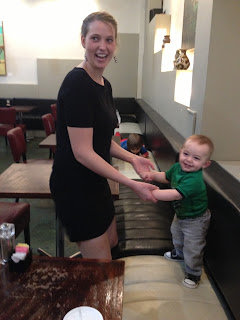 We just weren't feeling the Jr. yesterday and May texted Jessie for us to come and eat lunch where she was working so we did that. Everyone had just about cleared out of the Mockingbird by the time we got there and we had the place to ourselves which made not only for fine dining but for dancing opportunities as well.
See above for evidence.

After lunch we were going to go to a park but somehow, do not ask me, ended up at the mall. It was fine. I was with my grandsons. 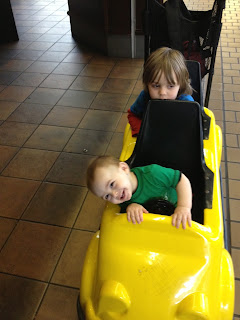 Owen and I are going through an especially good stage together right now. He is starting to really "get" humor and he also humors me and I love that. "Mer-Mer listens to me," he said yesterday. And I do. Look- when you have little children at home you can't possibly listen to their every word but when you spend a few hours with them, you sure can. So I listen. And I respond. And I spray men's cologne on him and I tease him and ask him if I can buy him a dress to wear and he gives me that Owen look like, "Oh Mer-Mer. You are insane."
We were talking about the wedding at lunch and someone asked him if he was going to dance. He said, "No. I don't want to dance. I wish I was little again."
Lily pointed out that this may come from the way we all get so excited when Gibson dances. Baby dancing is about the cutest thing in the world. She's probably right and if this is true it's the closest Owen comes to showing any jealousy about his baby brother.
We walked through the mall and Jessie shopped for a little lip stain for her wedding and then we went and got coffee and let the boys play in the little play area for kids. It was fun. Gibson can crawl through the crawl-through things and Owen made several little friends and flipped on and off the giant whatever-those-things-are and at one point, he and I laid down together on the cushy matted floor and looked up at the clouds through the skylights. They were moving fast and it was a lovely moment.
When we were leaving the mall, Owen was holding my hand and I said, "You know, the Beatles wrote a song about holding hands."
"Right," he said.
I began to recite the lyrics to him to "I Want To Hold Your Hand" and after each verse, he would begin to do a sort of popping rap which somehow fit in beautifully as if he were saying, "Sure. I know that song. I'll do this part." And it was wonderful and we held hands and I never want to forget that.

Ever since Jessie got here we've been discussing going down to Spring Creek for a meal. Spring Creek is a little village at a springhead down at the coast and finally, last night we went. Mr. Moon got home from auction and Lily and May drove down and met us and Jessie drove the four of us down there in her daddy's big truck down the long, straight dark roads with deer on the shoulders and it was a very fine thing. We know the owners and they've owned the place since 1977 and everything you eat there was caught that day. "Tell me what you ate," the man said, "And I'll tell you who caught it." What we ate was everything from stone crab claws to mullet to oysters to shrimp to tomato pie to hushpuppies to blue crab claws. You just can't beat that. The thing that the kids remember about the place from their childhoods is the salad. They bring out big bowls of iceberg lettuce, cut into wedges with a few slices of cucumber, some cherry tomatoes and green onions. You serve yourself and there are huge jars of croutons on the table and bacon bits and wine bottles filled with the house dressing which is white, creamy, and delicious. A child's idea of salad for sure and it's still good.
Here's a picture of some of the Spanish moss hanging from the trees outside the place last night. 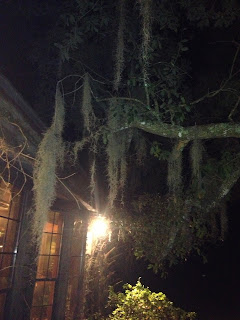 It was creepy and dark and beautiful and I could smell the spring flowing into the Gulf right there.

This morning I've had a tramp through the woods on a logging trail that Vergil discovered Sunday morning on his nine mile run. Jessie and he were going to go walk on it and they persuaded me to go too. I don't usually like to walk with other people and in fact, I hate it, but this was rather glorious. We got caught by brambles and I slipped crossing a little creeklet and my foot got wet but so what? Vergil found an old glass gallon jug and I found what I think is a fox skull. 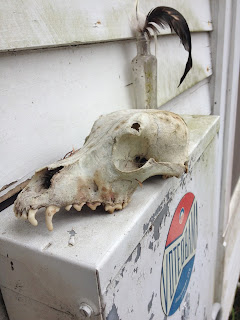 While we were walking, Lily called. Jason threw up again and now Gibson is too. Jason, after throwing up, went to work and Lily's supposed to go to work later but of course she wants to stay home with her son. Bless his little heart. He's never been sick before like this and he's sad. It's a gray heavy day and we're supposed to get rain and now my grandson is sick and poor Lily. Well, that's life isn't it? One day is clear and beautiful and everyone feels great and the next day the sky is like dirty, heavy mattress stuffing and the baby is sick.

Jessie and Vergil are getting ready to leave. They want to stop in Omega, Georgia at the Jesus y Maria Taqueria and I don't blame them. I'd stop there too. I've written about the place before and it's one of my favorite things about driving from here to Asheville. It's going to be odd when they're gone. It's been about fifty years, it seems, since Mr. Moon and I were alone.
I texted him yesterday and said, "Could you locate my boyfriend and tell him that I would like him to take me to Dog Island this weekend?" I think that made him happy. He said he could. It's supposed to get cold but be clear and so we can walk on the beach and the bay and in the pines and we can play cards and snuggle and make good food and enjoy ourselves being all alone.
I believe we'll remember how to do that.

Two weeks today since my mother died and I'm okay. Also? We still have ham.

I should get out and plant those palms and the camellia since it's going to rain.

This is life. This is my life, anyway. Babies and Beatles, night drives to the coast, day walks through the swamp. Fox skulls and red-winged blackbirds, crab claws and rooster calls and tomato pie and sometimes we cry but mostly we laugh at ourselves and each other and with each other and sometimes we lie on our backs at the mall and watch the clouds blow by and oh, by the way, here's a picture from the ones I took of Jessie and Vergil yesterday. 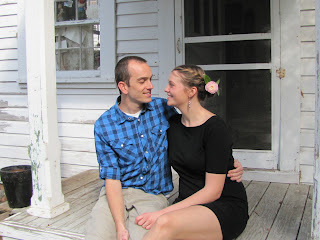