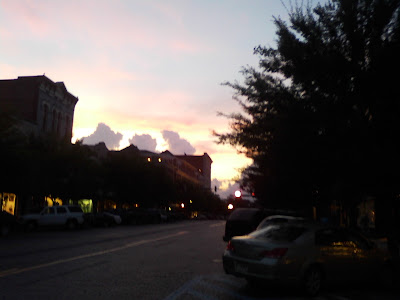 Last night Herb and Kathleen picked me up and we drove through the quiet early evening past mansions on hills and sharecropper cabins and pine trees and fields of corn and cotton and swamps and woods and when we got to Thomasville we ate a delicious supper and then went downtown to see a production of Our Town, which is a play by Thornton Wilder, which was published in 1957.

Here's what Mr. Wilder wrote about his play:

"It is an attempt to find a value above all price for the smallest events in our daily life. I have made the claim as preposterous as possible for I have set the village against the largest dimensions of time and place."

I was excited to see the play, having been in a production of it myself back in oh? 1971 or so, I suppose. I played Emily, the girl whose life is most closely followed in the three acts. And as the lights went down and the Stage Manager came on to tell about life in Grover's Corners, the small New Hampshire town where the play is set, I settled down in my seat to listen and watch and try to remember the person I'd been when I was in that play. It's such a gentle play. There are no props beyond several chairs, two ladders, two tables. It's timeless and quiet. There are no loud passions until the end, and then they are merely the longings of a woman who has died for the ordinary things of "clocks ticking...Mama's sunflowers. And food and coffee. And new-ironed dresses and hot baths....and sleeping and waking up. Oh earth," Emily says, "You're too wonderful for anybody to realize you."

She looks at the Stage Manager and says, "Do any human beings ever realize life while they live it? - every, every minute?"

The Stage Manager says, "No." He pauses. "The saints and poets, maybe- they do some."

And isn't that what this blog is? Isn't that what I write about here? The very things that Emily talked about in the play? Gardens and coffee and baths, love and marriage, and going to sleep and waking up? I don't have a man who delivers milk in the morning but my children call their daddy Papa sometimes. They know, like Emily knew, how much their Papa loves them. How much their Mama loves them.

And I thought about the irony of me playing that role- that of a young girl, falling in love, having a family who loves and cherishes her while I was living such a different life. Oh yes, I was falling in love, but my family- well, it is very telling that one night after we finished the play I was so happy and so in love with life and the boy I was with and I was expecting to go home to an empty house but found that my stepfather had unexpectedly come home early- a man I feared and loathed with all my heart, soul, bones and blood- and my moment of happiness turned into a night of something just this side of terror, knowing he was beyond my door which did not lock.
Back in May, I wrote about that night here.

And now, after seeing the play again last night, I feel quite certain that I would not be the person I am today, would not have the very life I have today, if I had not played Emily in high school. The words I said in that play may not have meant to me what they mean to me now, but I had an inkling already. I had an inkling that the life I was living then, the house I was living in then, the family I had then, was not the way it was supposed to be but that there was hope that I could find (create?) that life if I wanted to. That small human life where the simple pleasure of going to sleep and waking up was not overshadowed and ruined with terror.

And so I have. This small, ordinary life where a cup of coffee is a celebration, where going to sleep is a daily joy, where food is so important, where I know that life is too precious for most of us to understand but that I try. I try to acknowledge and even write about those small daily joys that are more than we humans can know.

It took me a long time to get to this life I lead now. So many struggles and false paths and ego battles and healings and breaking aparts and coming back together again within my self, my life. I had to reknit the very bones of my being before I could settle into this Grover's Corners existence I live. And I am sure that reknitting will never be done, but it is work I love, just as I love this life I lead.

The play ends when the Stage Manager says, "There are the stars- doing their old, old crisscross journeys in the sky. Scholars haven't settled the matter yet, but they seem to think there are no living beings up there. Just chalk...or fire. Only this one is straining away, straining away all the time to make something of itself. The strain's so bad that every sixteen hours everybody lies down and gets a rest. Hm...Eleven o'clock in Grover's Corners. - You get a good rest, too. Good night."

The dead sit in their graves pondering the stars and letting loose of the lives they lived, and the living lie down to rest.

And here I am, in the Grover's Corners of my little world, and it's so beautiful today. It's cool and the sun is out and everything is growing and green and I can hear chickens clucking and there's a cup of coffee at hand and I am not a saint and I am not a poet, but I played Emily once and what I said as her so many years ago I have discovered is part of the most important dialogue I speak daily.

But I know this- playing Emily thirty-seven years ago might have saved my life.
I wish Thornton Wilder was still alive so I could tell him that. I was good in that play. Very good. And I think it's because even though I was only seventeen and didn't really yet know how very precious the smallest things are, I knew that they should be and with all the yearning in my heart for a life that was not filled with terror and fear and complications of the sort that can shrivel a soul I said those words of Emily's and because of that, I said them well.

I am so grateful that those words found themselves into my mouth to repeat over and over again as we rehearsed, as we performed. Enough for me to internalize them, even as I thought I had forgotten them. Which has led to this. This small, ordinary, precious life I have.

Which is so far more than enough I can't begin to tell you. 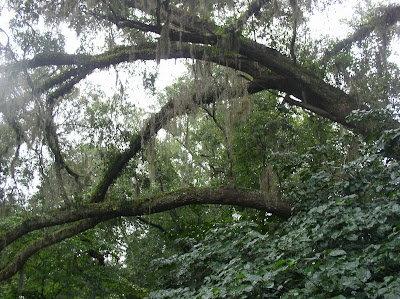