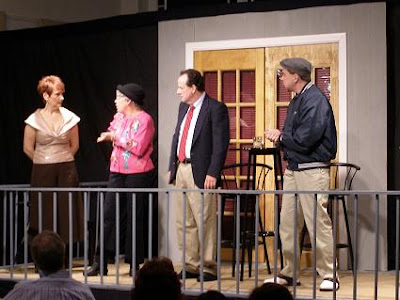 Well, it would appear that I am not heading into a new career as a barmaid. Barmatron?

The story goes something like this:
A few months ago a fellow approached Mr. Moon about renting part of the plaza to build a pool hall and sports bar. This was exciting news as we needed tenants. However, the fellow never followed up with so much as a phone call so Mr. Moon decided that opening a bar was not a bad idea and that we could do it ourselves. And so he started, as you know, doing the research, tearing out walls, making plans, contacting carpenters and electricians and spending time down at the city getting code information, etc. Full steam ahead, no holds barred.

And then one day the fellow who had first approached Mr. Moon about the idea of a bar showed back up.

"Stole my idea, eh?" he asked Mr. Moon who was covered in white dust and wielding a sledge hammer.

Well, it turns out that Original Fellow had been doing feasibility studies and so forth while Mr. Moon had taken a look around and made the decision that a bar was feasible and then grabbed his tools and set to work.

But Original Fellow was still interested. Very, very interested. And he had partners. And they wanted to open a bar and well, it looks like we're going to be landlords instead of bar owners, which really, was the original intent of building the plaza.

But they want to hire Mr. Moon to contract the build-out, which is good. I guess they admire his work-ethic.

There's a part of us which is somewhat disappointed. We were sort of excited at the idea of having a family business. But there's also the fact that opening a business like that takes a hell of a lot of work and energy and long hours that stretch into the night and frankly, Mr. Moon and I like to be asleep by eleven p.m. at the latest.

But there's still no contract in place and we've learned through the years that what looks like a sure-thing can dissolve quickly into a surely-not thing so who knows?

And thus, life goes on. I've got another part in another play and this one- well, it's a different sort of play altogether. It's an "interactive murder mystery" which purports to have elements of Hitchcock and The Postman Always Rings Twice in it but which to me sounds more absurd than anything. Instead of playing five characters I'll only be playing one- a psychopathic assassin named Natasha and yes, there is a Boris. Strangely enough, no Rocky or Bullwinkle though. I'm not exactly sure why I'm doing this except that it gets me out of the house, forces me to use my brain, and as I've said so many times before, lets me play. I am not at all good at playing on my own, so being not only allowed but sort of required to play is a good thing for me. Plus I think there may be an opportunity here for a really fun costume and a LOT of make-up. And I'll be walking around for the next few months talking in a fake Russian accent which can only be fun, fun, fun! right?

This weekend we are taking the play we did last month over to Milton to perform there. Click on the picture above to read all about it. I'm the old lady in the pink sweater and if you could see that sweater in a close-up, you'd drive all the way to Milton just to see it in person. I swear!
I can't really believe we're going to pull all those costumes out of the closet and put them on again, say those lines again, do that play again.

But we are. Twice.

Which reminds me, I better go through my lines again before rehearsal tonight because baby, I have a mind like a steel sieve.

And that's the news today. No philosophizing or meditating on the higher meaning of spring. No politics, no ranting, no poetry. No metaphors and no point, for that matter. No mention of Jennifer Lopez's ass, no funny blather about kissin' de boys or smokin' de dope.

Just bloggity, blog, blog, as I have come to say and I think that my stop is coming up so let me gather my bags and my coat. Enjoy the rest of your ride.

We'll talk more tomorrow. Perhaps about my new career as an ACTOR in the THEATER!

Pass ze vodka, dahlink, and I will make you ze potato zoup.
Posted by Ms. Moon at 9:48 AM