We Could Probably All Use A Little Organization In Our Lives 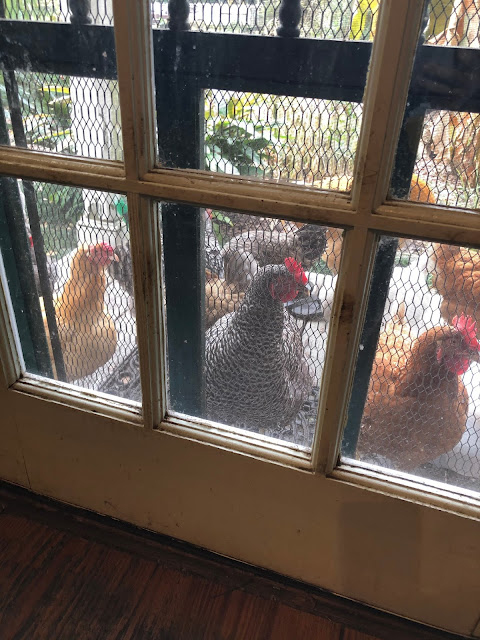 Hello, hello! Can we come in and eat some treats?

I swear, if it wasn't for the poop, I would gladly allow my chickens in the house. As Mr. Moon said this morning, between our cats and our chickens, we are always amused. Maurice slept with us last night and this morning when we tried to snuggle a bit, that crazy orange cat who was between us made noises like she wanted to take our heads off. We only laughed but that was because we were protected by layers of covers, otherwise we both would have frozen in fear. I was wondering the other day if perhaps Maurice just has very, very sensitive skin. Perhaps a nerve disorder thing? But no, I'm sure that's not it. She simply does not want to be moved at all if she is in a comfortable place.
I do not even want to think about what her early childhood was like. Poor baby.

So what did I do today? I know you can't stand the suspense so I'll tell you- not fucking much.

The chickens will sleep better tonight because I cleaned out their henhouse and we will sleep cozy because I washed the sheets.
I know. You're shocked!

But I did reorganize my main food cabinet AND the spices. It took me all day to get around to that and about an hour to do it. Procrastination has become my super power since the pandemic began. I could give in-services on how best to waste time. Via Zoom, of course. 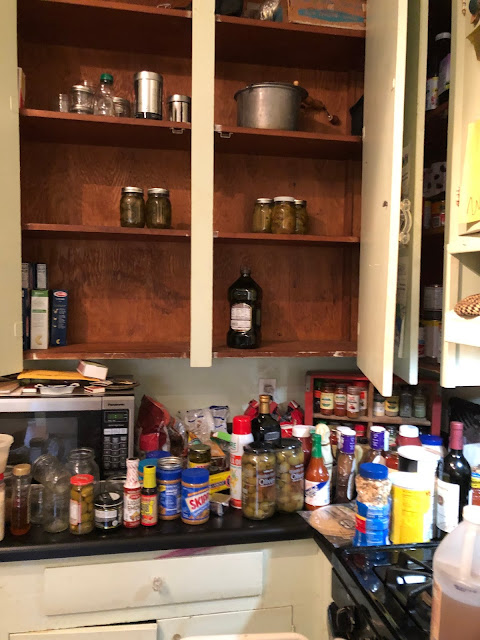 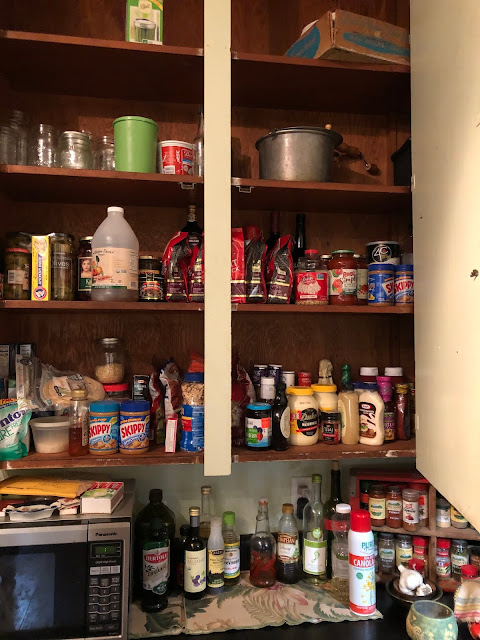 That's a little better. Guess what? I have three unopened bottles of Liquid Smoke. Three. Also, three jars of chunky peanut butter. As you can see. And again in threes- Pepperidge Farm stuffing mix. And oh yes, there is a lot of coffee because when Publix sells the kind we like (Eight O'Clock French Roast- we are not coffee snobs) on BOGO, we buy a bunch. But that will all get used in a timely manner. I threw away a few things. Or, gave them to the chickens. Like a box of freekeh. Remember when I was all into ancient grains? I should try that again. Meanwhile, the chickens loved it. I threw away a jar of pickled beets without a date on them. They looked...funky. I kept another jar of undated beets. Why have I ever put any home-canned food on my shelves that weren't dated? I swear- I've learned my lesson. I threw away some pepper vinegar that I think someone gave me as a gift sixteen years ago. In the south, you get a bottle of pepper vinegar and you just keep adding vinegar to it as you use it up. I mean, you can go into restaurants and find bottles of pepper vinegar wherein the peppers are white from being reused so many times. The ones I threw out weren't exactly white but they were definitely mushy.
As I said, I also went through and organized my spices. Now this is going to change my life. I have spices in several different places and until today, there was no real rhyme or reason as to why they were in the places they were. I have an old wooden Coke case that I keep some in by the stove while some live on some built-in shelves near the stove, and of course others make their home above the stove. Right? I did not deal with that last category today but here's how the rest of it went. 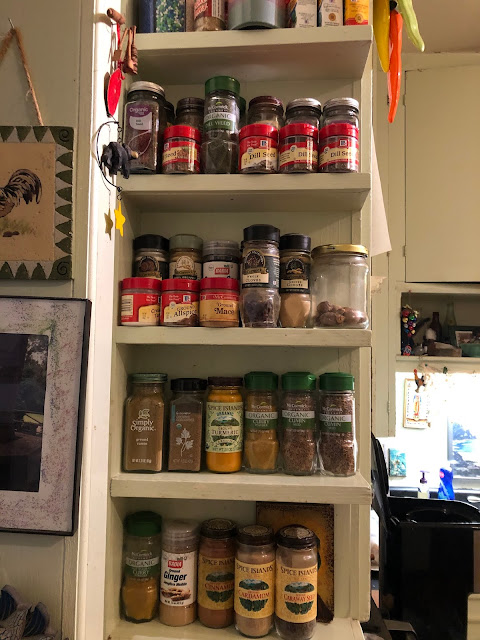 These are the baking, pickling, and Indian spices. 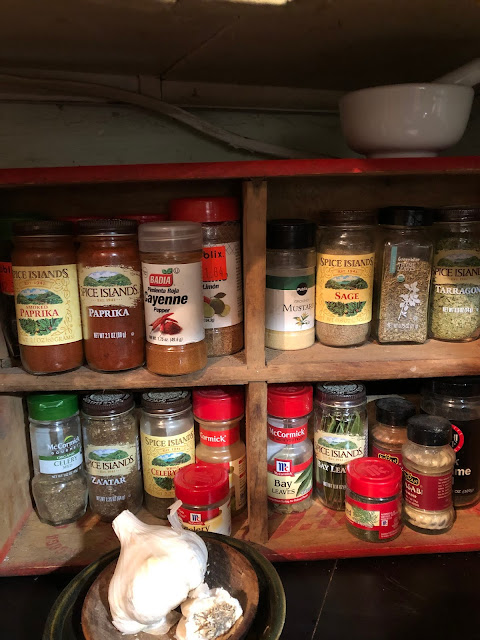 And here we have the others. The thyme, the bay leaves, sage, paprikas, etc. I keep my oregano in the freezer because I buy it in bulk at Costco.
And I did throw out a lot of old spices. I thought about Steve Reed  who never throws anything away and I felt a tiny bit guilty but not very. I mean- ancient spices add nothing to either food or life. That's my opinion, anyway. Life is short. Replace your spices.
Perhaps I'll slowly get the entire kitchen in a more organized and pared-down condition. I sure would like that. And it's sort of fun, isn't it? I think it would be a lot more fun if I were stoned when I did it but sadly, that's not part of my reality these days.
Oh well.
Martinis, however, are, and my husband just made me one.
He's such a sweetie.
Love...Ms. Moon
Posted by Ms. Moon at 6:41 PM