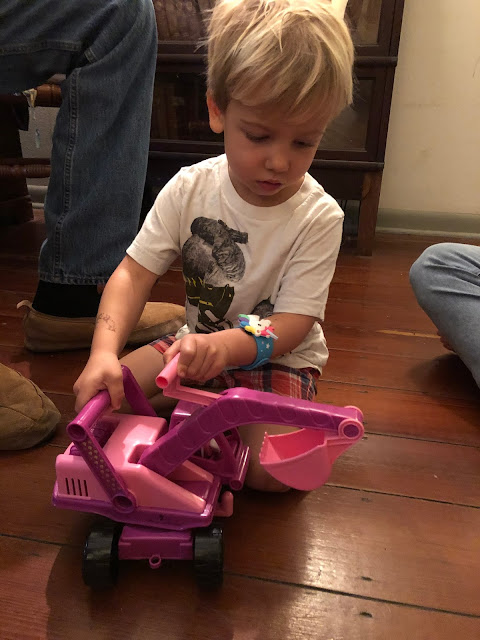 The pink dump truck and earth mover I ordered online got here a few days ago and knowing that the boys were going to come out today, I wrapped them both up in the box they came in and told the guys they could share them. They were so thrilled. The toys are quite clever and have locks and levers so that the different parts can be manipulated and it took a little while to figure everything out.
"I don't think I've ever seen any toy trucks this complex," said Boppy.
"That's because they're designed for girls," I muttered to Jessie.
Haha!

It was a lazy visit. There was TV watching. 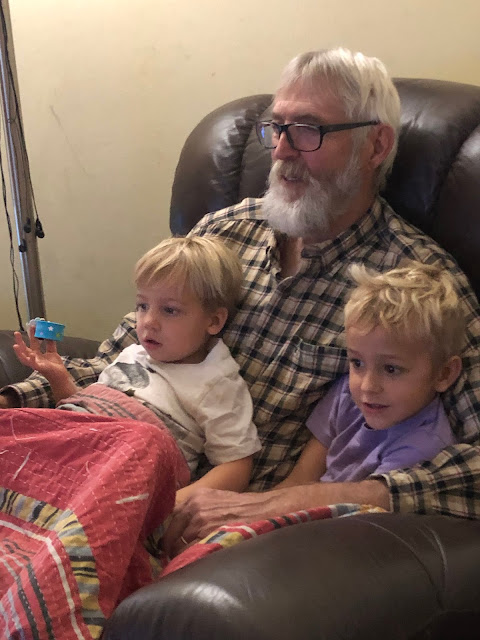 I will admit that I do get a little jealous of all the snuggles Mr. Moon gets in that chair. He often dozes off when they're all piled up together, the cover over them. The boys do not care.
August's eye looked perfectly fine today and he told us the story of how it happened, beginning with receiving the rocket launcher for Christmas and putting it together. A long story.
"Did it hurt very badly?" I asked him.
"Yes. I cried," he said.
Poor baby. But it doesn't hurt any more.
We had buffet lunch with leftovers and hotdogs and it was all delicious and then there was some manly activity wherein Mr. Moon and the boys pulled a few trees up with the truck. You can only imagine how exciting that was. Levon even got to drive a little, sitting on his Boppy's lap.
After they left to stop by Lily's on the way home to finally exchange Christmas presents and drop off a big steamer pan for Lily to use for the tamales she's making, I actually got some of August's name quilt pinned together to start stitching. Lord but it's going to be a funny-looking quilt with the two different rainbow prints I have combined with a shocking pink backing made of that soft material which cannot possibly be found in nature. Oh well. He'll love it.
So. New Year's Eve, right? I'm going to roast a little chicken and make Mr. Moon's favorite potatoes and cook artichokes. I've even made stuffing for the chicken because that's about my favorite food. We'll watch another episode of Bridgerton. Last night we finally got to the sexy parts.
"Sex!" we both called out! "Finally!"
It's odd. Things may change but at this point, the action is quite sexy and we have seen bosoms on characters but we have NOT seen the breasts of the main female character nor have there been any naked man butts. Are sixty-six year old women supposed to be noticing these things?
Yes. Yes we are.
I know it's normal on New Year's Eve to at least attempt to think back on the year we're about to kick to the curb to make some sense of it and to look forward to new beginnings as we step into what we so innocently call the New Year. As if time were really measured that way. But you know what? I just can't.
There is no sense to any of it so I'm just going to keep doing the best I can knowing that we are living in unprecedented times where the only things we truly have to fall back on are science, patience, sense, nature, friendship, and love. That we need more than ever to cherish that which is genuine, to discard that which is not.
And basically, to keep on with this thing we call life as long as we're okay doing that.
And that's all I have on this, New Year's Eve, 2020.
It's been a hell of a year. A hell of a ride. And however we've managed to stay on the back of this beast thundering through the darkness, we need to just keep on doing that.
Love...Ms. Moon
Posted by Ms. Moon at 6:35 PM