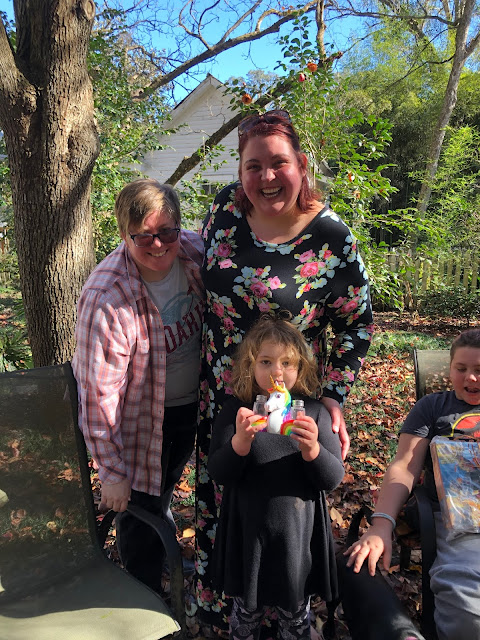 Quite a while back I briefly mentioned that there was something going on here in my world that I couldn't discuss because it wasn't my story to tell but I have been given permission now and so I will because it is part of our family's story.
Hmmmm...
How to begin?
Well. Over a year ago now, Lily and Jason separated. I had no idea that there was any problem between them and neither did almost anyone else. The day I mentioned that something had happened, Lily had come out to tell me and her Daddy and she was so very upset and so very worried that we would be angry or disappointed or one of those things that children never want their parents to be.
Of course we were shocked, but there was no anger and no disappointment. Both Mr. Moon and I had been married to other people and divorced before we met each other. In a fantasy world people would fall in love, get married, and stay married forever and ever, happily ever after, always, amen.
In the real world, this does not always happen.
And we went through feeling surprise and sorrow because the break-up of a family is very hard thing. I know. I broke up with my first husband when my children were little and I am still very emotional about that even though I know it was the right thing to do. Not just for me but for the children and for him. Still, it was one of the most incredibly difficult and heart-rending things I've ever experienced.
It just was.
So. We knew we wanted to support Lily in this very hard time and we knew that we also did not want to make Jason feel as if we were judging him in any way because we love Jason and he is the father of three of our grandchildren. And there really was no "fault" in this situation. It was mostly a falling-apart for various reasons and they had already decided that more than anything, they wanted the children to feel loved and cared for, safe and supported.
As did their grandfather and I.
The children are always the main concern and their health and happiness is of utmost importance.
And things carried on. Jason eventually moved into his mother's house where the children feel at home when they stay with their dad and he has continued to be a big part of their lives and he and Lily get along very well so that the children see that their mother and father can be friends who love each other, still, in ways that matter, even if things change.

And then Lily and Lauren began a relationship. I think that some of you may have already guessed parts of this. Especially when I've written about them all visiting Lauren's parents who treat the kids as if they were their own grandchildren. They have been far more than accepting. They have been thrilled to have these three kids become a part of their lives and they have taken them in with such love right along with Lily.

And we have absolutely come to love Lauren. Although she certainly never expected to be in a relationship where children were involved, she has stepped up in ways that I can't even believe. She is so good with those kids. And she is so good to those kids. She is responsible and beyond caring. And the children know she cares. They know that she is Lily's partner and, well, in our family love is quite definitely love and that's all there is to it.

And to be honest- I've never seen my daughter Lily happier in her life. It's absolutely unbelievable. For that and that alone I would love Lauren and be glad that she and Lily have found each other.

Today the ladies brought the kids out so that we could exchange presents. Lily gave us homemade bath bombs and pickles and jellies and we got the kids presents, of course, and I had bought that silly unicorn rainbow salt and pepper holder for Lily and Lauren and I took the picture above. Lily loves that silly thing. Right before I took the picture, she said, "Maggie says she has two moms now."
We all laughed because- well, yeah.

And a few hours ago Lily texted and told me that if I wanted to write about her and Lauren, it was okay.
And now I have. Because you are all, in some way, part of my family. Some of you have known me now since before Lily had Owen. You have been with me through births and through deaths. Through times when I didn't know if I was going to make it out alive and times when I have been filled with joy. Hell, you know I wash my sheets on Friday.

And in one more bit of news- I drove to Monticello today to pick up forms at the library to fill out and hand in to the health department which will get my husband and I scheduled for the Moderna vaccine. At first I said that I would wait awhile and let others who need it more get it but Mr. Moon said, "No. Owen and Gibson and Maggie need us." Since before Owen was born, his Boppy has been planning all the things they would do together when Owen got older and by damn, he's ready to do those things. And we are both so very, very ready to kiss the children, to hug them tight, to kiss and hug their mama.
And Lauren.
And Jason too. 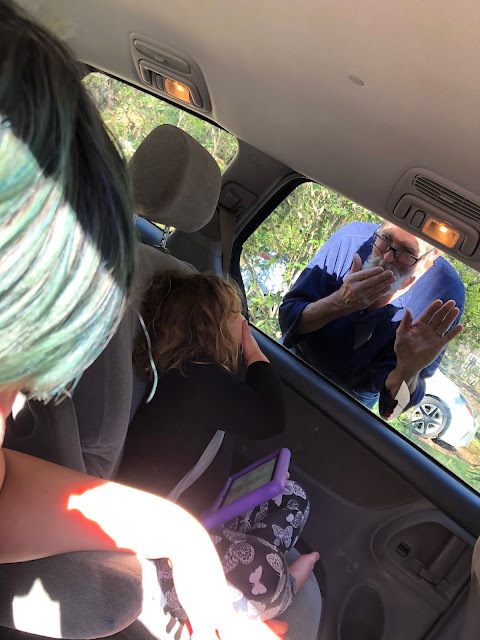 And bonus! I got to see Terez at the library! We were so happy to see each other. He called me his favorite hippie which delighted me. We chatted a bit outside, both of us masked, but he took off his mask for me to take his picture from a good distance away. 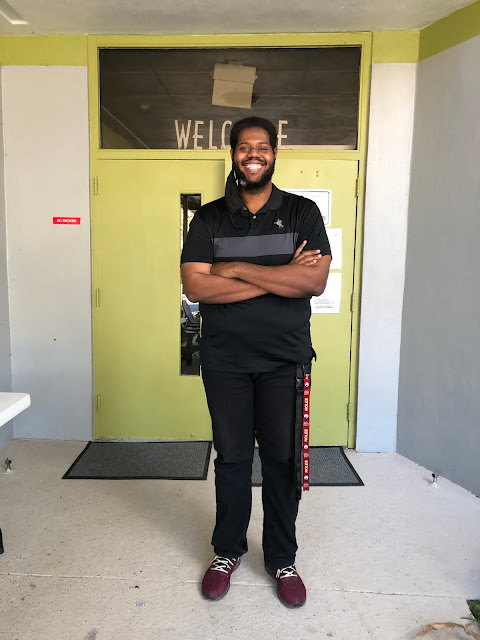