Good-Bye To A Sweet Little Hen 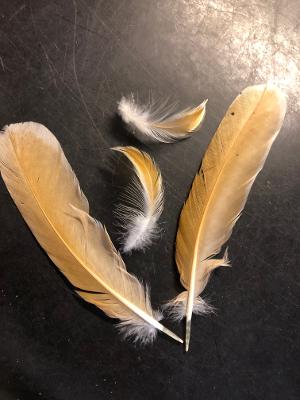 Last night when I shut the chickens up I did a head count which we always do although if one is missing, there's nothing to be done about it since it's dark. But we do count their little chicken heads and since last spring, we've had seventeen every night and have been saying how amazing it is that we haven't lost any this year which is not generally the case because every critter on earth loves chicken from possums to raccoons to hawks to eagles to owls to foxes. And more.
But last night I could only count sixteen and it was Tweety that I could not find. Now sometimes those chickens can be wily, especially the banties, and hide in the hen house under straw or behind another bird or up on a ledge and although I gave the hen house a good look-over with the flashlight and couldn't see her, I thought that maybe she'd surprise me in the morning by being there.

But she wasn't.
When I went out to open up the hen house door I found feathers. 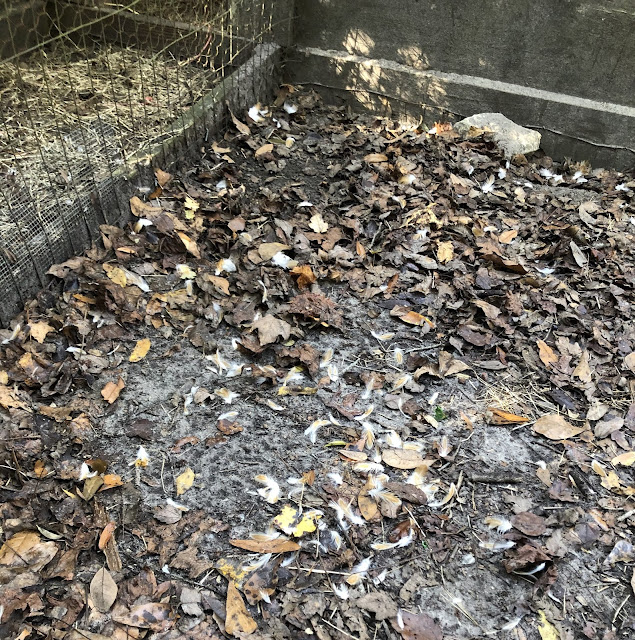 Just feathers, no body, so I'm thinking a hawk snatched her right before she went to roost. I feel so bad. She was such a funny little bird-chicken and I adored her tiny eggs. But when you keep chickens you just have to face the fact that you're going to lose some. Especially if you let them free-range. But even if you keep them cooped up, predators can sometimes get in and take them, as we know and I think that diseases and infections are more apt to happen if they are cooped all the time.
So.
It got pretty cold last night but I was cozy. I made up my bed for single-sleeping with sheets, a cotton blanket, the quilt, the duck, and the duckling. Jack cuddled up to my hip so I was definitely not cold. Our new heater works fine but I set it low at night and even crack the window above my head. I like it cold(ish) so that I have a good excuse for all the covers. Hell, I even have the fan on but that's for sound more than anything. I slept very, very well.
Hank came over before noon. He's trying to reset his internal clock so that he's not nocturnal. He'll always be nocturnal but he can keep more normal hours if he works at it. He seemed bright and cheerful today, quite handsome in a new green plaid flannel shirt, and we visited on the porch. I gave him eggs and some field peas and a plant for Rachel. Before I knew it, the day was half over and I'd done nothing, really. I ordered a few things I needed online and a few little Christmas presents. Not much. But it's a start. I also ordered some flannel for a blanket for August and I realize now I’m  should have ordered some for Magnolia's blanket too. I'll do that tomorrow. Joanne's online had regular $7.99 a yard flannel for $2.99 so I need to order all I think I might want. I got a package ready to mail to a friend and did a few other tiny things. Nothing really. But somehow it was suddenly five o'clock.
I've talked to my husband and he is happy as can be. He said, "Lord, it's beautiful here." I know he loves being in the Tennessee woods and I love thinking about him there.
I've put the chickens up for tonight- sixteen. I had to wait awhile for the last three to finish up their twilight corn-pecking before they decided to join their family in the roost. I just stood and watched them scratching away until one at a time, they decided to go to bed. There are always a few stragglers. Perhaps some of them are like Hank- more nocturnal than the others.
I've gotten out the Goodwill cashmere and again, I am so surprised at its warmth and softness. I do hope to go thrift-shopping again some day.
It'll happen.
And now I'm going to go cook one of my favorite things- the roasted cauliflower I love from the New York Times cooking app. I'll eat it while watching more of "The Crown" which Mr. Moon told me it was okay to go ahead and watch without him.
Ha-ha.
Can I just say that Charles and Diana were a fucking train wreck? Good god. Bless their hearts.
Love...Ms. Moon
Posted by Ms. Moon at 6:30 PM