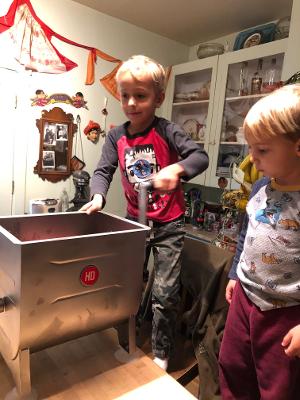 Jessie brought the boys out today so that she could go do a huge shopping. Christmas presents were involved. Mr. Moon and I were quite happy to have the boys visit. Before they got here we talked about what we might do with them. I looked at my tiny tree, still on the kitchen island and said, "They could help us decorate the Christmas tree."
Knee-slapper, right?
Then I said in an off-handed way that I could make cookies for us to roll out and cut and bake and decorate. "They'd like that," I said. Mr. Moon made it clear that he, too, would like that. Not the making or decorating part necessarily, but the eating part. He planned to make some more sausage, but a different kind. He had bought a new sausage-mixer to use and was excited to try it out.
When the boys got here, they of course immediately wanted to see their Boppy and for a little while they all cuddled up and watched some horrible Legos dinosaur thing on TV. When that was over and Mr. Moon was getting out his equipment, he mentioned the cookies again and so I got out my childhood cookbook for the sugar cookie recipe and made up a batch's worth of dough but the timing was way off because my kitchen was again becoming a sausage factory and besides the fact that there was no room for any cookie rolling and cutting, the boys had no interest in the cookies but instead, couldn't wait to help Boppy with his project. I wrapped up the dough in wax paper and put it in the refrigerator and went about my business.

They got the meat all mixed with the spices and then it was time for lunch which today consisted of gourmet sandwiches of peanut butter, honey, raisins, AND bananas. Oh yeah. Well, Mr. Moon and I had leftover soup. And then there was some more TV while the sausage mixture infused or something and then out came the stuffing machinery. I doubt that's what it's called in real life but whatever. 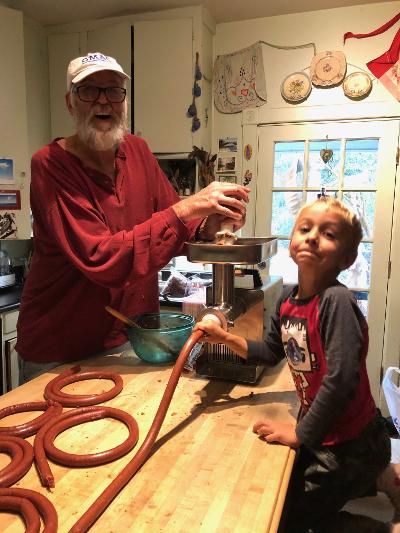 Y'all- can I just say that never in a million years would a fifteen-year old Mary have believed that one day I would be married to a man who made sausage out of meat that he, uh, killed and that I would have grandchildren who helped him make such obscene looking products with that meat.
And yet- here we are.
And I never would have believed that two little children would be more interested in making sausage than in making cookies but I did not realize the power of the beloved grandfather until my husband became one.
They did deign to let me read some books to them and of course that thrilled me. While the kids had been watching TV with Boppy, I had mended a few books that were falling apart with some blue tape that I had and for awhile, Levon was mostly interested in fixing more books with blue tape. So we did that.
It's going to freeze tonight and I have covered my plants again. It's already pretty darn chilly. I am so grateful for a warm house.
Jessie has lent me a tiny string of battery operated lights for my tiny tree and so now we are decorated for Christmas. 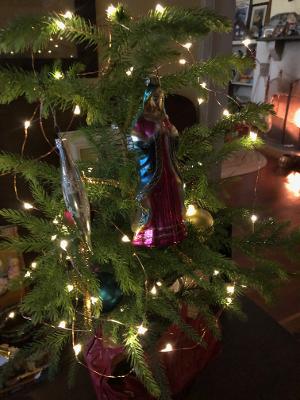 I do believe this is my favorite Christmas tree ever. I hung one little ornament that had been inadvertently left on the Norfolk Island Pine last year and also one madonna ornament that usually sits over my kitchen sink. It is perfect.
As is this. 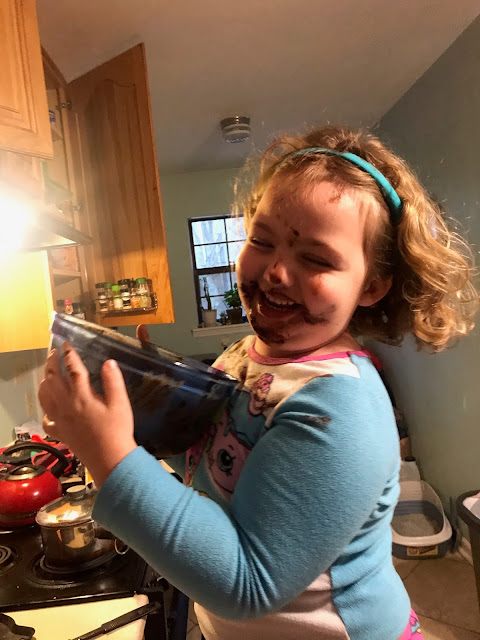 Magnolia helped her mother make a chocolate cake today. May suggests that this should be on the cover of the next Joy of Cooking.
I do so agree.
I sent the cookie dough home with Jessie as a project for her to do with the boys. Perhaps she'll bring her daddy a few of the cookies they bake. He'd appreciate that.
Love...Ms. Moon
Posted by Ms. Moon at 6:13 PM