A Whole Lot Of Sweetness 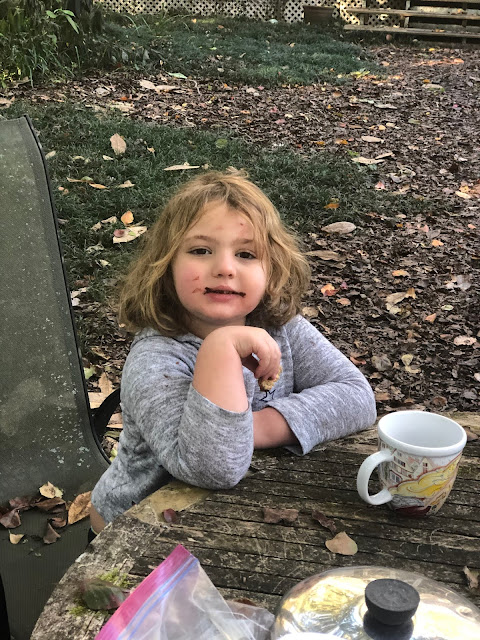 There's Little Ms. Magnolia June, drinking hot chocolate and eating chocolate chip cookies in my backyard today. How can someone with chocolate smeared about her face still look so amazingly sophisticated?

I have been a cookie making fool lately! Besides the ones I made today for the kids, I made some yesterday for a friend and of course the huge batch I made for Glen on Sunday. But that's all. I have no more chocolate chips in the house. And for whatever reason, I've had no desire to eat them myself and have happily sent them all off with others. I'd much rather eat roasted cauliflower with its delicious sauce made of oil, lemon juice, garlic, and chopped olives.
I can't get enough of that stuff.

I've had another day of getting nothing done that "needed" to be done. I intended to clean the hen house but forgot until late afternoon and I'd just put my gloves on when Lily and the kids came over. I knew they were coming but thought maybe I'd have enough time to sneak that chore in but no, I didn't. Oh well. It was a lot more fun to visit with my babies. 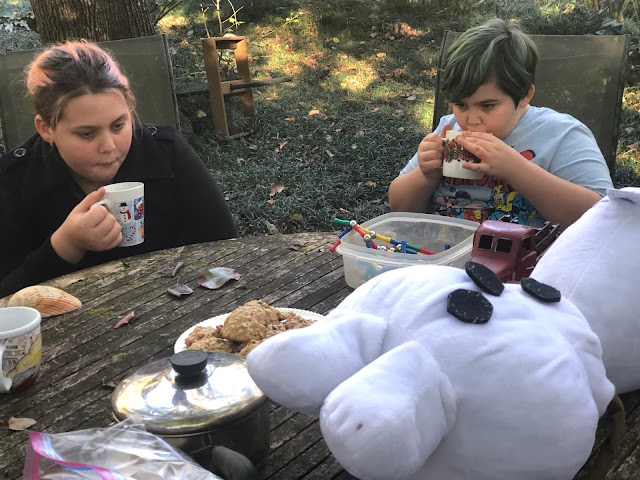 We had some rousing discussions ranging from what neutrons are to why humans shouldn't practice incest although it doesn't bother chickens (can you guess that chicken sex was going on around us?) which led to discussing hemophilia and periods and genetics in general and then on to animals with craws, evolution, and other things. I love that Lily can talk so frankly and easily with her children about such things. Owen was more of a participant than Gibson was. He was more interested in the magnet toys that he plays with although he did have a few things to say, one of which was to tell us how eggs are formed. It turns out that the yolk is formed first, then the white part, and THEN the shell.
This may be true.
Magnolia was off playing with dinosaurs and other animals most of the time, occupied happily by what was going on in her own imaginary worlds. Far more entertaining, I am sure.
She also collected eggs and wanted to find Maurice but Maurice was hiding. Jack made an appearance though.
Earlier in the day I did more flannel shopping and also went to the post office where the lady said, "I've got a big old package for you. You're going to have to come around the back to get it."
"Am I going to need my car?" I asked her. I had walked there.
"I think you are," she said.
So I walked home, got the car, drove back to the PO and she met me at the back door with a rather large box with a trolling motor in it. Vergil has convinced Mr. Moon to buy an inflatable kayak which has been ordered but won't get here for a while. But the little motor he bought to go with it (motor? for a kayak?) obviously has. I managed to stow the thing in my back seat and drove it home.
We'll be having a fine time in that kayak on the local rivers, perhaps on the bay behind the Dog Island house, and who knows? Perhaps we'll even take it down to Roseland and paddle about the Sebastian River. I think Vergil had a good idea there.
And here you go. The first pink perfection camellias for the year. 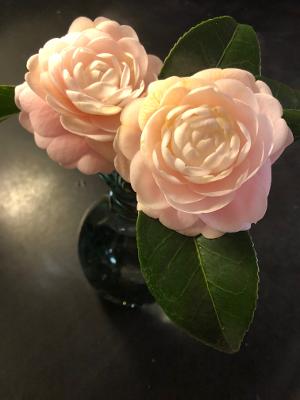